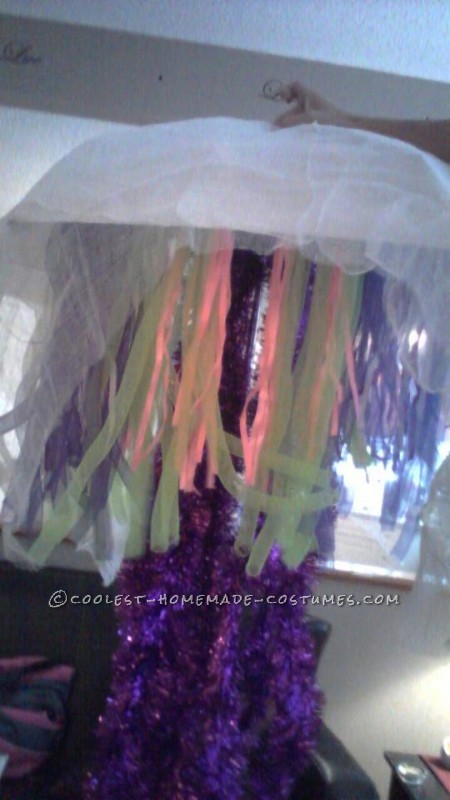 My daughter saw a picture on pinterest of a jellyfish costume and that was it thats what’s what gave her the cool Phosphorescent Jellyfish Costume idea which she HAD to be.  But ummmm HOW !???

So I finally found a white umbrella at the drug store.  Then I went looking from store to store,  dollar stores, thrift stores, whatever for more ideas.  I wanted battery operated black lights to make it all glow !  But there was non to be found.  And what I did find would have made it way to heavy for a 7 YO .   So I was searching through a thrift store that brings in a ton of Halloween stuff each year and found these…. headbands…  IDK  they had this colored coil stuff  and they lit up !  I bought 8 !!  ( OK they weren’t so cheap either ).  Later found out the dollar store had them to cheaper !!!  Head smack !

SO I taped them on their side stretching them from one rod to the next under the umbrella.  Well it looks cool enough.  But now to make the long tentacles.  So I found some bright purple garland.  hmmmm,  I weaved it in the underneath of the umbrella too.  The lights from the headbands twinkled awesomely off the purple garland !  Then I covered the top of the umbrella with cheesecloth.  I just laid it over the top.  It gave it the softer look of a jellyfish.

I did find some battery operated lights and they were very soft so I pinned them around the edge of the umbrella just for some extra light to it ( totally not needed,  I think I will take them off for trick or treating ! ).  She looked so kool in the dark light she was floating right through the crowds.

Tip: she wore it to her school Halloween party and it was so crowded it bumped a lot of people! Not such a good plan, lol, and she got tired of carrying it too while playing games,  lol.

I have higher hopes for Halloween night.  Cross your fingers for us! 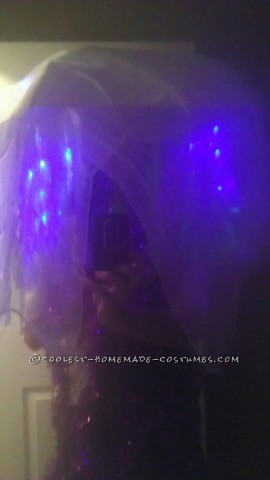