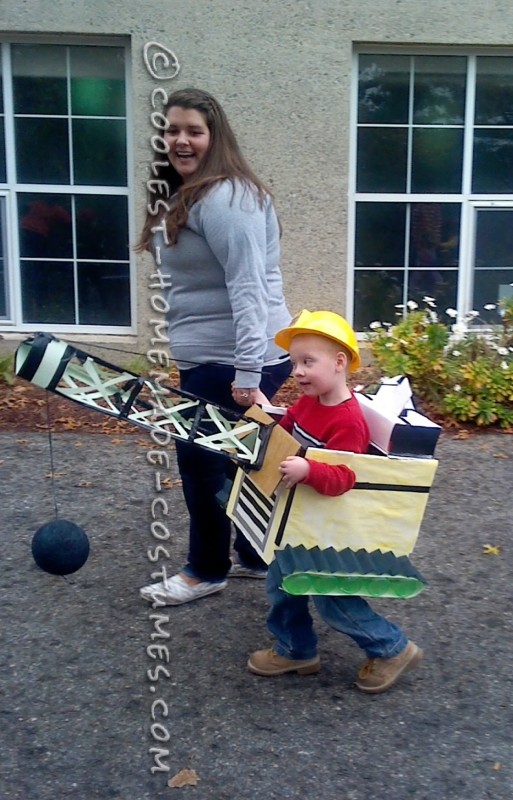 My 3-year old son Phoenix is into all thinks with wheels!  When I asked him what he wanted to be this year for Halloween his reply was “Hmm…mama…let’s hab a diggah…no no…backhoe!  Hmm, oh mama, I mean a mudd truck!, Yes, a mudd truck.” So here I am thinking,  I need boxes, paint, tape and glue!  Then as I begin collecting the items for his “mudd truck”, he says, “Oh mama, I want a crane.  No hook….a wrecking ball mama, yes a wrecking ball!”  Ok, so now after changing his mind a zillion times, I confirmed an additional zillion times that this is what he wanted. Confirmed!  So as my life has it, there I was beginning this costume at 8pm, the night before Halloween, knowing full well he needed a costume to arrive to his Pre-K class in the morning.  Starting with a diaper box, I glued in all but two flaps into the box.  On one  flap I glued a cardbard box from his juice boxes.  I cover all the exposed box with paper that I pre-painted yellow and hot glued down.  I used a thick paper for the crane and track.  I cut the length and then tri-folded the crane and used a box cutter to cut the triangles (I guestimated on all of these). I used electrical tape on the crane to hold it and used pieces of wooden dowels to reinforce.  I then cut a triangle in the other front flap and glued and taped it in.  I used plastic cups that I cut in half for the wheels and glued them into the paper tracks.  I took an additional piece of paper, painted it black and accordian folded it for the track blades. I used a string and styrafoam ball painted black for the wrecking ball and ran it through the back juice box up over the crane and down.  Then I decorated with tape and markers and used red foam paper for the lights.  Best part was seeing his face the next morning…even though I was working on it until 3:30 AM!  It was worth it for the praise he got.  Many parents and teachers encouraged me to enter this contest and share in my overnight wrecking ball success!  Hope you enjoy it.  Phoenix certainly did! 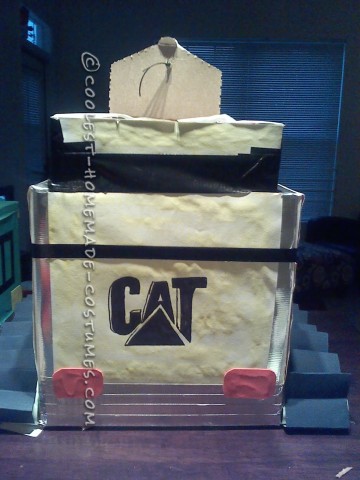 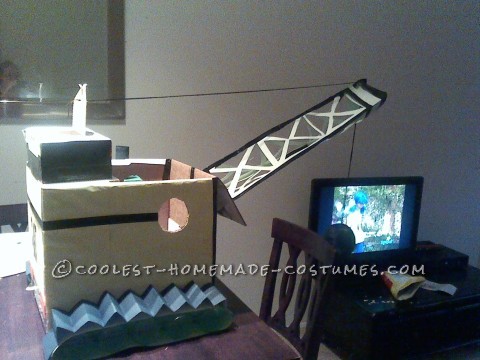