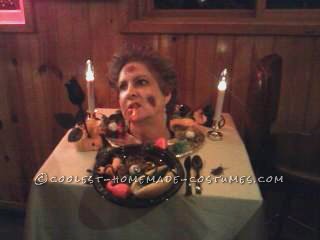 I  love Halloween, and I love making costumes! I always try to take an idea that’s been around forever and make it my own. This year I decided that Head on a Platter is the way to go!

The first thing I did was cut a square out of really sturdy cardboard. Then I cut a hole in the middle that was large enough for my head to fit through. I glued squares of thick foam rubber on either side of the hole. These formed a shelf so the card board ‘table’ would sit up on my shoulders. I covered it with a table cloth that was long enough to cover my body, but not long enough to trip on. I cut another piece of cardboard in a circle and covered it in foil. Now I had my platter.

I bought some plastic bugs, a black rose and 2 battery operated candles at the Dollar store. I also bought black plastic dinner ware, chocolate eyeballs, and fake food. I beheaded a cheap plastic doll that I bought at a thrift  store, and cut the head in half so it could be glued flush to the table. This became a ‘vase’ for the rose. I glued some of the other doll body parts, some bugs, eyeballs, etc, on the plates. I glued some floral moss on, too. That really added a creepy look to the ‘meal’. I ‘set’ the table for two, made my face up with green and grey make-up, glued a bug or two on my cheeks, put some of the moss in my hair, and, “Bon Appetit”!

I had a great time…people really loved the candle sticks and gummy worm that I was gnawing on.

Headless Halloween Costume: The Beheaded and The Killer