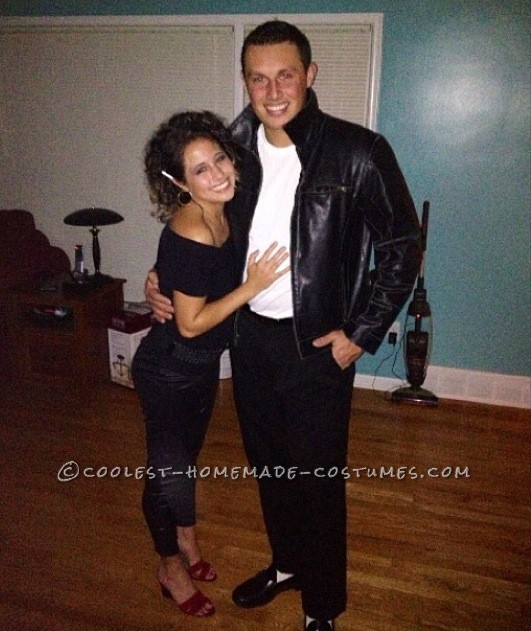 The movie “Grease” will never get old, and my boyfriend and I wanted to make sure we received the best costume when we went to a Halloween party in 2012.
How we made our costume:

For Sandy:
it was actually quite a mission. I am a natural brunette, Italian, long hair.. and as far as a blue eyed Sandy as they get! I had my sister (who is a hairstylist) put in blonde extension pieces, curl each part of my head and pin up my long dark hair into a short high curly do. It took her over an hour just to place each of the bobby pins into place so my hair would look short and curly.

The out fit was a bit more simple. I went to Salvation Army and found a black cheap top with a white neck line to lay on my shoulders. I had old shiny, tight, skinny pants from an old costume. I used a simple black belt around my waist and had old red shoes I literally cut the backs off of just to make it look like Sandy’s red backless shoes. (Don’t worry, they were old… I’d advise not doing that to expensive shoes!)

I put some red lipstick on, black eyeliner and of course a cigarette in hand.

For my Danny:
My boyfriend was a great sport about this costume. Most men hate dressing up for Halloween but he did an awesome job and made an awesome Danny.

For the Danny costume: We got him a white plain T-shirt, for the jacket he borrowed one from his dad and we had his aunt actually paste on letters in white that said,”T BIRDS” (It looked great!) He wore black slacks, and borrowed his dads old penny loafers with white socks. We slicked his hair back and had him put a cigarette in his ear, with a comb in his pocket.

This costume was very affordable and worth all the little details. It’s a very cute idea for ANYONE. Like I said, I didn’t necessarily look the part, but it came out cute. The reactions we received were great, everyone enjoyed it and kept singing and playing Grease songs half the night! 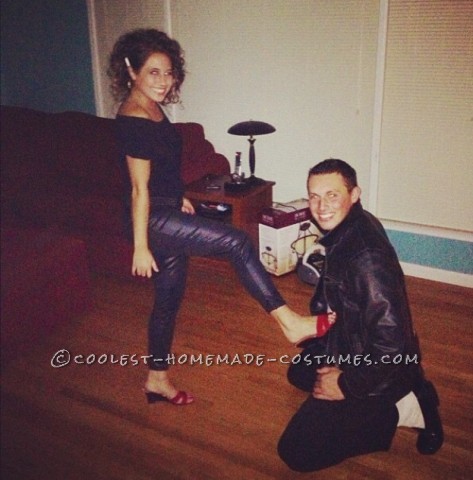