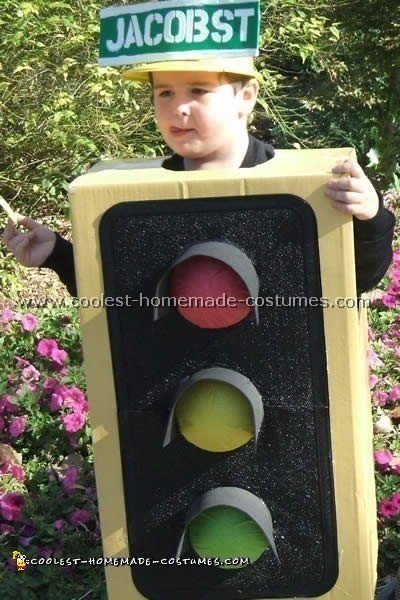 My son wanted at first to be a red light. So I decided to search the Web for childrens Halloween costumes and we would make a Stop light. I used a box that Styrofoam cups came in as the basis for this costume and then spray painted it yellow. I glued two vinyl car floor mats on the box cutting one so that they fit the box evenly horizontally. Then I cut out the three holes with a box cutter for the lights.

For the lights I used three battery operated touch lights and covered them with tissue paper in red, yellow and green and placed them in the holes and secured them with heavy duty glue. For the covers over the lights I used a black sheet of foam cut to fit around the lights. I cut holes in the top and sides for arms and head. For the hat I used a cheap plastic hat and more green foam cut in the shape of a street sign and stenciled the letters on it and hot glued it on.

Everyone loved this costume as much as my son did. It has been one of my favorite childrens Halloween costumes so far.

My 5-year-old LOVES stoplights.  She has a small “toy” stoplight in her room.  I used that as my inspiration, as I couldn’t find too many ideas for these types of childrens Halloween costumes.

I started with a large box.  I turned it inside out and cut out the holes for her head and arms and then for the 3 lights in front.  After reinforcing the holes with masking tape, I spray-painted it bright yellow.

As it turned out, the hardest part was finding battery-operated blinking lights.  My original plan was to buy the battery-operated white lights from the local craft store and change out the bulbs with my Christmas lights.  Well, none of those blinked and that just wouldn’t do!!  I ended up finding a strand of blinking LED lights on the Internet.  Remarkably, the colors of the bulbs were red, yellow, and green (REALLY!) and I ordered 3 sets.

I used 3 plastic containers that yogurt covered pretzels come in for the “lenses.”  I used a drill to make holes just big enough for the lights to go through.  Then I covered it with tin foil with the shiny side facing in to reflect the lights.

I had to take the bulb out, push the bottom through the hole, and then put the bulb back in.  This took quite a while!!  After I fit each container of lights into the box, I taped the battery packs to the inside of the costume.  TIP:  Don’t forget to put the batteries in first ;-)

As a finishing touch, I used yellow fun-foam for the “shields” over each light.  I painted one side black just like a real stoplight.  I hot glued these onto the box.

On Halloween night, I turned on the lights and put them in blinking mode.  It looked really cool in the dark!!  One family actually stopped walking as they passed by and waited for the light to turn green.

The light is a cardboard box spray painted yellow (make sure you spray a primer on the box first). I cut out a circle for his head and arms to go through. The entire bottom of the box was gone so he could walk. Make sure your box isn’t too big around, or too long or they won’t be able to hold the candy bucket, because they can’t reach their arms around to meet each other (if it’s too long they’ll have trouble walking). Make sure it doesn’t hang below the knees. These types of childrens halloween costumes for an older child might not be as difficult, but he is only 4-years-old and about 4 ft tall so he had some difficulty walking in the box).

The black on the box is a piece of vinyl I glued on. I glued fun foam circles colored silver – with a line through the middle – to serve as a screw in the corners of the vinyl. The lights are the moon/touch lights painted. I used black spray paint for the white edges (using a styrofoam bowl to cover the light itself). I used Gallery glass on the lights which needed several coats and didn’t cover very well (spray paint would probably work just as well).

I cut out a piece of fun foam to go over the top of the light and come part of the way down the light like the real ones have (like a visor). I used a play construction hat and glued street signs, which I made on my computer and glued to bamboo skewers onto the hat (the lights did work, so he had the added visibility factor for safety). Use a good glue to hold the lights on or else as they walk the lights will bounce back and forth and eventually could come off. He wore a black sweat suit underneath the outfit. This was one of the coolest childrens Halloween costumes to make!