Super fun DIY chicken costumes for everyone from babies through grown-ups. Learn how to craft your own fluffy chick this Halloween and get clucking! You’ll also find loads of homemade costume ideas and DIY Halloween costume inspiration.

We called this experience “when good chicken costumes go bad”! In all actuality it was really cute and my daughter was the hit of the evening. I just sewed a white boa on an onesy and a hat and used felt for the comb on top and the cut-outs velcroed to her sneakers. Definitely a keeper! Total Spent: $12 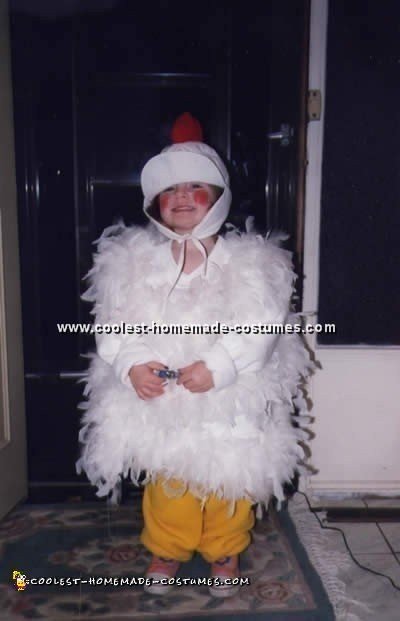 From all the chicken costumes that I saw, this is the one that I made for my daughter, Avery. However she would not wear it so her younger sister actually took it over.

I used 2 sweatshirts from Wal-Mart and stuffed them. I used 2 feather boas and sewed them on. To make the pants, I used bright yellow fleece. In order to make the head, I bought a used hat at a rummage store and sewed red felt to the top. Everyone loved the costume but mostly Darienne!! 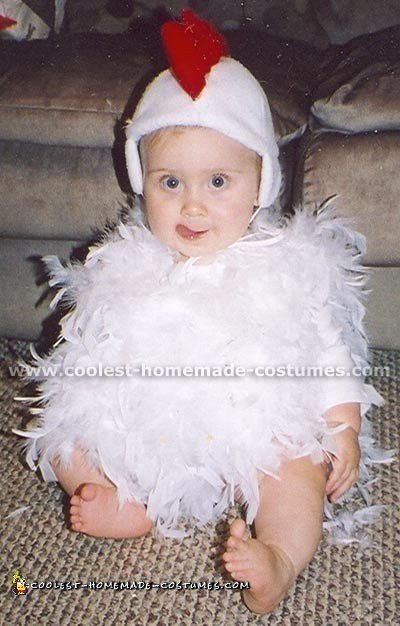 I received this idea from a Martha Stewart magazine a few years ago. Chicken costumes are adorable and very easy to make.

First you need to find a white onesie in your child’s size. Next purchase two white feather boas from a craft store.

The directions said to hot glue the feathers on to the onesie, however I found it to hold better by stitching it on. You can also stitch two onsies together and add padding to the belly area. My daughter was already filled out in the tummy area, so we skipped this part. It depends how full you want it.

For the hat find a white pilots cap. Cut out a pattern to make a comb. Cut out two sides on red fabric. Stitch the top together and stuff it before stitching it onto the hat. You can also add yellow tights and make chicken feet out of yellow rubber gloves. My daughter didn’t like tights at this time, but it would have been so cute.

Good luck with your chicken costumes!! 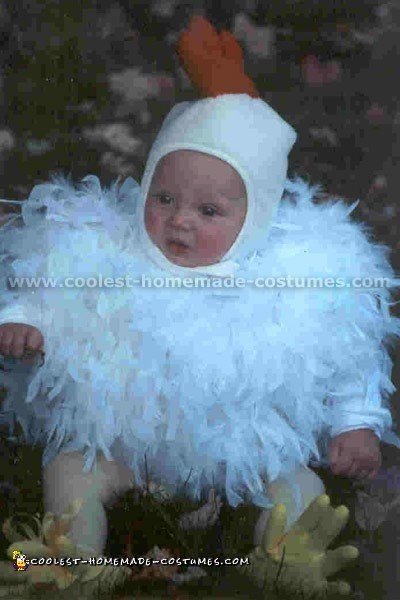 Place one turtleneck into the other. Slide enough batting in between the two and be sure it comes around fully, front to back (like a barrel).

Stitch seams of legs to one another, obviously, not stitching the openings closed but rather to make the two turtlenecks one.

Beginning at shoulder/neck area, attach the end of the first boa with a small stitch and continue wrapping the boas, loosely around the entire outfit attaching it randomly with stitches here and there until you have covered the entire ‘base’. Do not stitch to arms; it will be fluffy enough! Remember to add a little extra fluff to child’s bum! This looks adorable! Do not stitch over the bottom snaps.

Using a glue gun, go back and attach more of the boa randomly, ensuring it lies where you’d like it too. A dot of hot glue, here and there is just enough!

Take two 8 x 11 sheets of red felt, and trace out the wobbly top. Three lumps on top or so (use your imagination) and cut out. Lay the two on top of one another with the insides out. Stitch, leaving a small opening, turn outside in and stuff with some batting. Stitch closed. Attach to the pilots cap with a few stitches, and add some hot glue here too if you’d like.

Stuff fingers of kitchen gloves with batting then pull kitchen gloves over sneakers you will be using, wrap around the shoe completely, pull tight and cut to size, if need be. Lace sneaker with yellow ribbon, create holes in the gloves and pull ribbon through. This will attach them to the sneaker.

Dress your child and take a lot of pictures, expect a countless number of ooohhhhsss and ahhhsssss over such chicken costumes!!!

First off, when making chicken costumes, buy a white long sleeve onsie type shirt (the type that snap at the bottom, the largest size they make is 2T). You can get these for cheap at Wal-mart.

Then I took two feather boas. I found each for $2 on e-bay and sewed them on randomly (so there were no bare spots) leaving the arms bare, with an elastic type thread.

Next I took a white stocking cap, and cut the seam on the top. I bought two pieces of red felt, and cut out the top for the hat, stuffed them with a filling from a pillow we were no longer using, then sewed it up. Then I sewed it into the hat. Next, I purchased a pair of little girls’ tights, and dyed them yellow to match the felt I found for the feet.

Lastly, I cut out the felt to make a chicken foot shape and hot glued Velcro to the felt and his shoes, to make taking the shoes off easy (but still keeping the shoes hard to see). Oh, and don’t forget a little yellow face make-up for the cute little beak.

The egg basket was made with a large Easter egg I had purchased at Easter time; I cut the top off, and added some string (this could also be done using papier-mâché). It was really easy to make and cuter than any chicken costumes you can get in the stores! 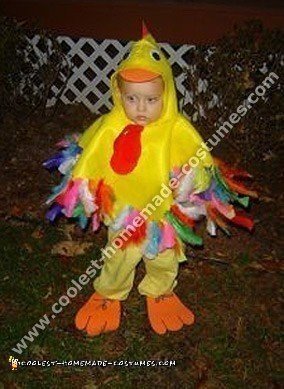 Mikey was two and wanted to be a rooster. I thought it was one of the cuter rooster chicken costumes! It was so easy to make!

I attached three teardrop-shaped pieces of red felt to the chinstrap of the hood for the little rooster beard. To finish the look, I made a red foam rooster thingy and glued it to the top of the hood.

I took orange foam and cut out the webbed feet and attached them around his ankles on top of his shoes. He wore a yellow sweat suit to match the outfit. My husband and I dressed as farmers and our two month old son dressed as a baby chick popping out of an egg! Every one loved our costumes and he had so much fun “twick-or-tweating”!

Farmers and Their Tiny Chicken 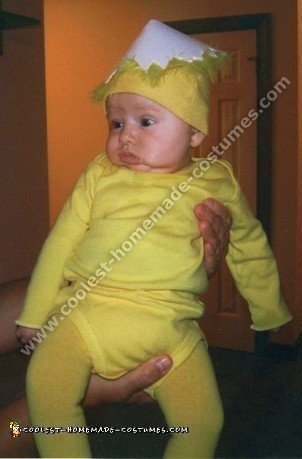 My oldest son wanted to be a rooster and I like to do family themes, so I found this idea in a magazine and thought it was perfect for my two-month-old baby! I used a baby backpack and covered it with white foam to make it look like the bottom of a cracked egg.

I dressed Gavin in tights and a long-sleeved onsie that I dyed yellow.

In addition, I also dyed a white newborn cap yellow and glued to it white foam that I shaped into the top of the cracked egg. 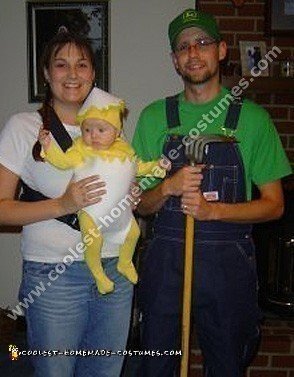 I glued yellow feathers, bought from the craft section at Wal-mart, to the egg top. Gavin got to ride around in his egg backpack while we took Mikey the rooster all over the neighborhood trick-or-treating! My husband and I dressed as farmers to stick with the theme!! Everyone just loved our two chicken costumes and we did too! 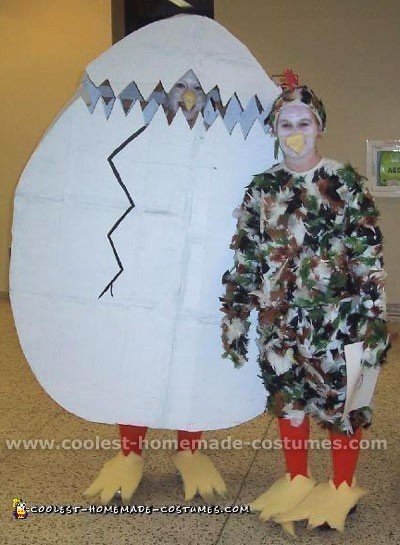 This year my roommate and I did a Chicken and an Egg with the theme of “Which came first?”

I was the egg, which was easily constructed out of cardboard, duct tape and white paint. I made a harness so that it would rest on my shoulders and the hat was attached to a piece of foam that fit around my head.

The crack was added to make it look real. We split the egg with a huge crack and made the top and bottom so that I could see and it looked as though I was a chick hatching. I covered the sides of the costume with cheap white fabric so that you couldn’t see in the sides since the two pieces, front and back, were just flat.

My roommate took a simple white sweat suit, cut it off at the knees and glued “natural” colored feathers to it using spray adhesive. Then she made the comb for her white hat out of fun foam. Her hat and gloves were also covered in feathers.

The chicken costumes feet, and the eggs feet for that matter, rested on top of our regular shoes and were made out of a piece of foam, same with the beaks. Our socks were soccer socks found at any sporting good store.

And a tip for chicken costumes, you have to act it up, cluck and peck while flapping your “wings” that always adds authenticity! We won the costume contest at our University for the third year in a row! So we felt very proud of all the hard work that we put into it! We always shoot for something original that we can make on our own, and we did it again.

I hope someone else likes these costumes as much as we did and can maybe build their own someday. Happy Halloween everyone! Have fun. 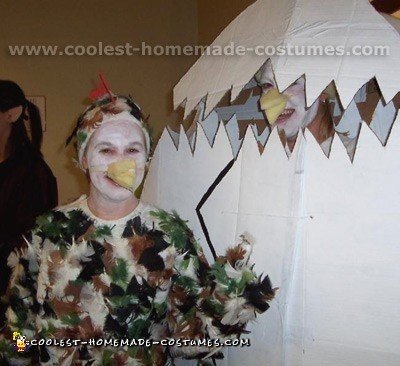