My sophmore year of college I decided to cut my hair really short and all of my friends told me I should dress up like Pebbles for Halloween. After looking on every Halloween website known to man I gave up and decided to make my own. In the mist of everything my boyfriend now decides … Read more 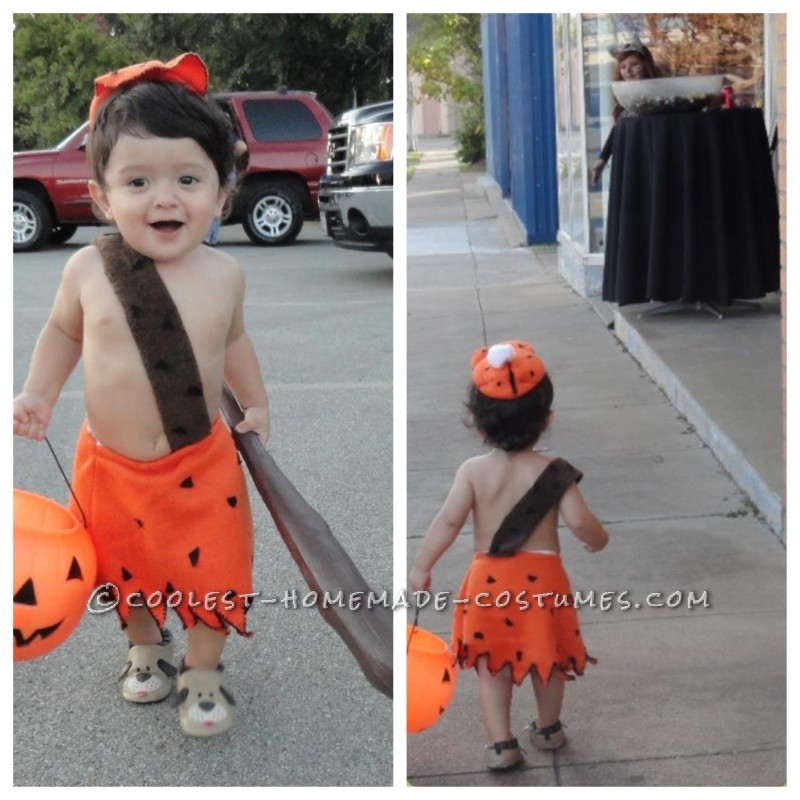 This costume was very easy and cheap to make. I went to my local craft store and bought some orange and black felt material, glue sticks, and some safety pins. I cut out the Bam Bam skirt and put the trim around the bottom. I then hot glued the black spots on it. I made … Read more 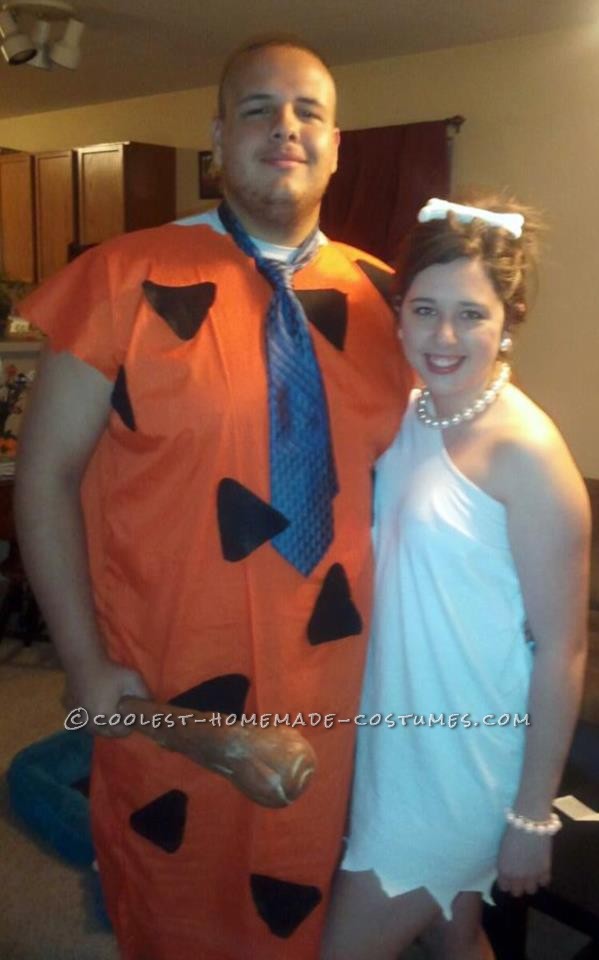 Wilma is a 2XL shirt cut to look like it (bought from Walmart for less than $5). Hair bone is made out of model magic. Fred is Orange Fabric bought from Walmart which we cut neck and arm holes in. We then used super glue to attach the black felt that we cut into squares … Read more 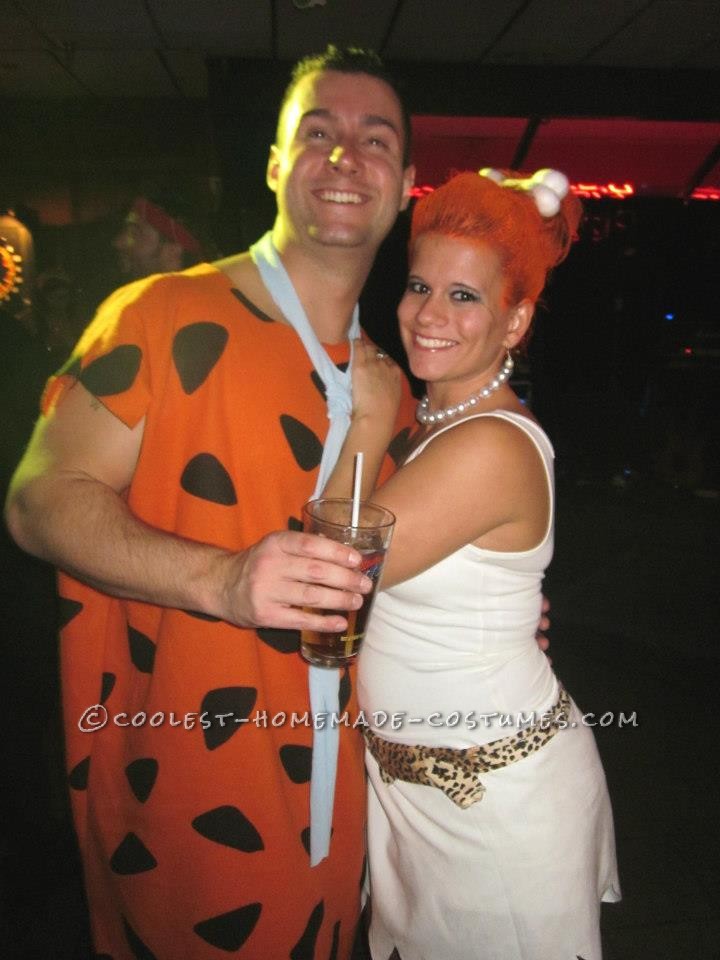 Halloween 2012 as Wilma and Fred Flinstone! Fred Costume- can be made easily with fabric from a fabric store. Black triangles to put all over the orange outfit.. You can use a baby blue fabric for a tie, and orange fabric for the full length outfit. Measure it and make sure it is a right fit and … Read more 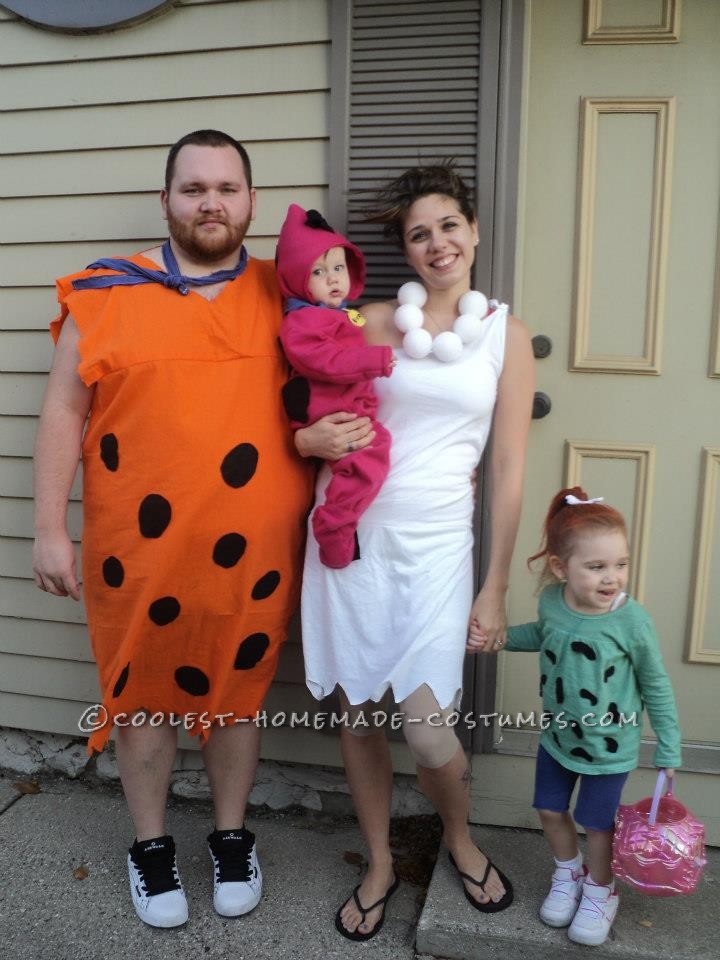 Meet the Flintstones. This family costume was created by using fleece for Dino and making it into footed pants and a sweatshirt. Also, there are mitts for his hands. Dino’s color came from t-shirt and was dyed. Dino’s tag was crocheted. Black spots were all hand cut and hand sewn from felt. Pebbles was made by dying a … Read more 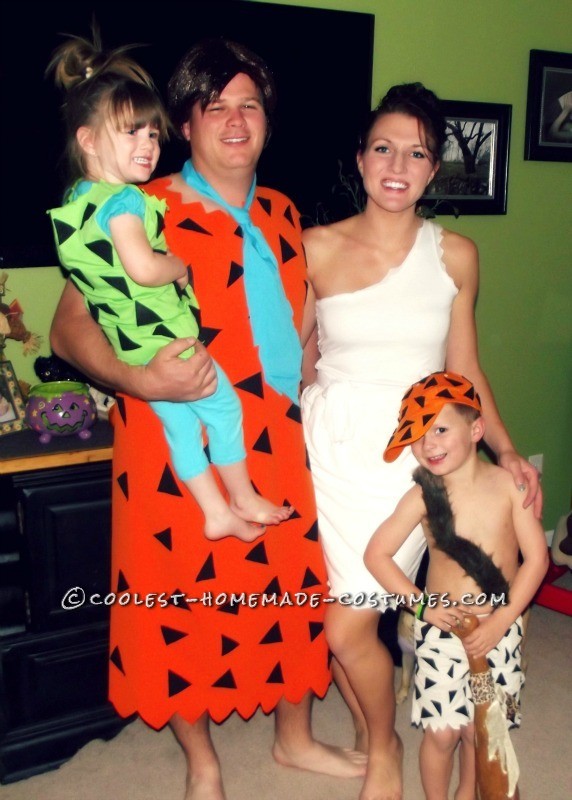 This year, we had a Halloween party at our house and I wanted to make costumes that involved our whole family. I’ve been thinking about the Flintstones for a while now and decided to give it a go. I sure am glad I did! Everyone loved our Flintstone Family Costumes! We posted pictures on Facebook … Read more 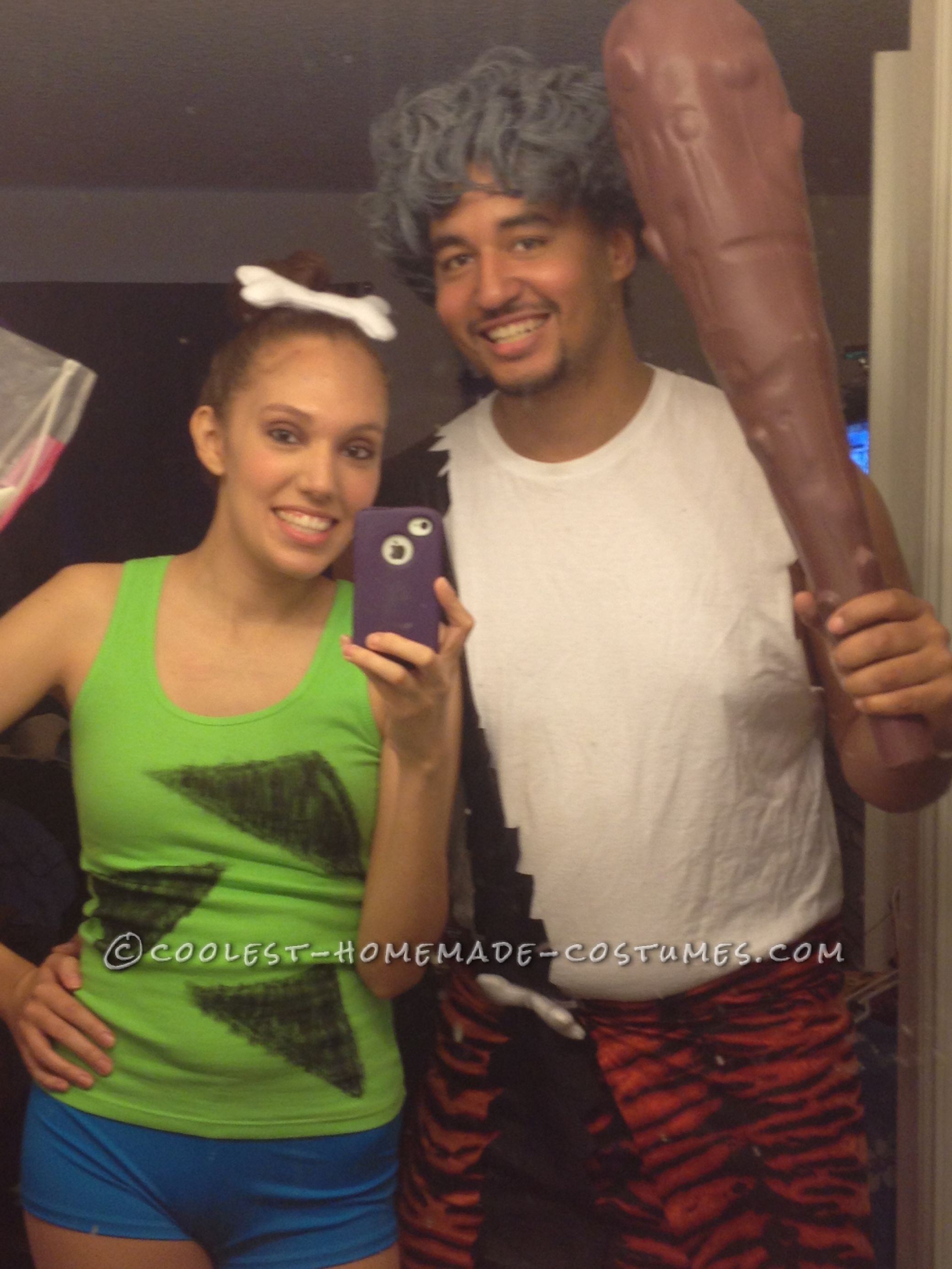 Intro: This Halloween, I wanted to be Pebbles! I was Pebbles when I was 4 years old but this Halloween I was like “I want to be grown-up Pebbles!” Oh, and the fact I finally found my Bamm-Bamm. So this is how I went about in making our coolest Pebbles and Bamm Bamm homemade Halloween … Read more 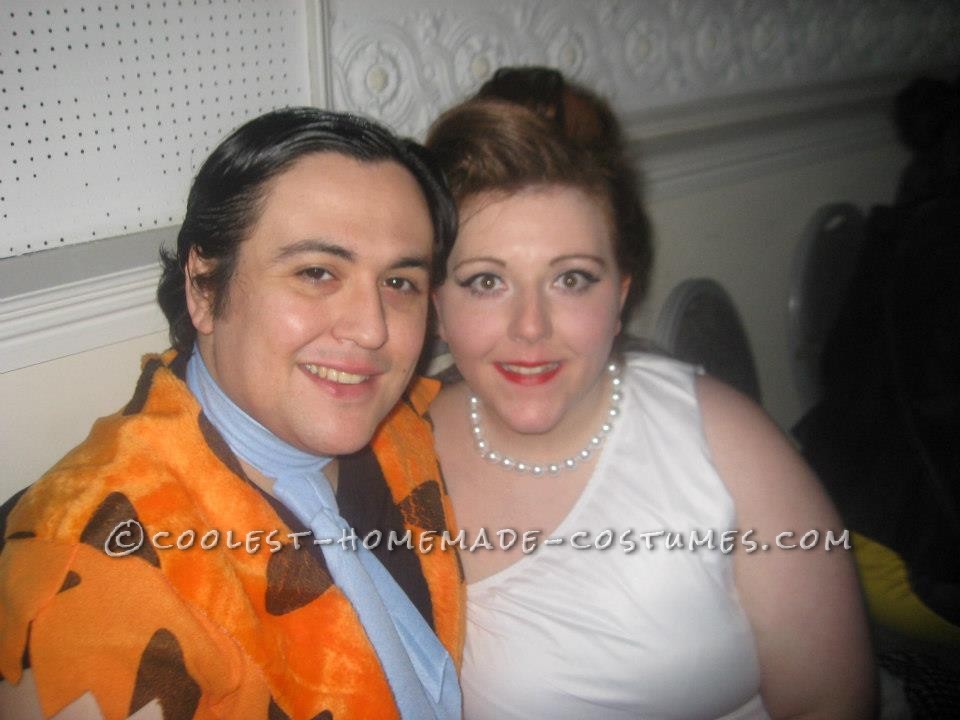 Fred bought his costume online and decided to go for the deluxe which was way better than the regular costumes, but I made mine from an old Roman toga costume I had from last year. I cut the end of the dress into rough V’s which gave the look and bought some cheap pearls in … Read more 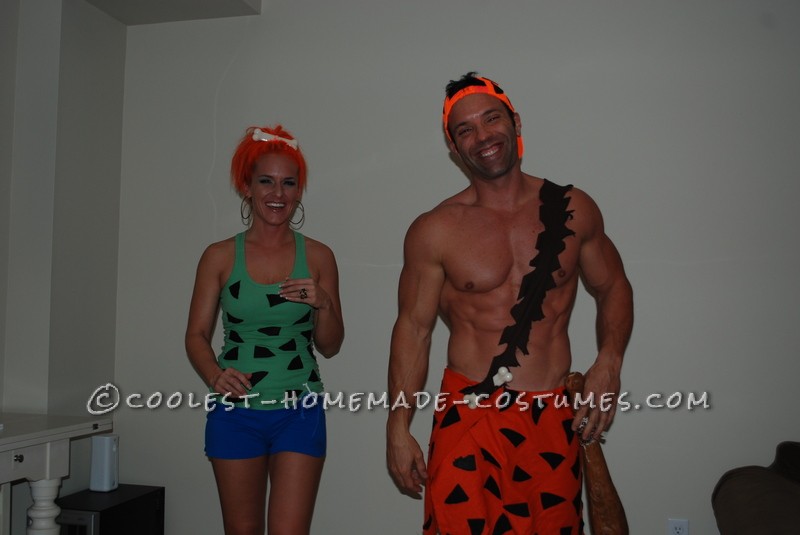 Pebbles’ costume was made using a green tank top bought from a second hand store. With a little help from my kids, we made and applied the black felt appliqués to the top using a hot glue gun.  The blue shorts were purchased and did not need to be altered, however I did tie a … Read more 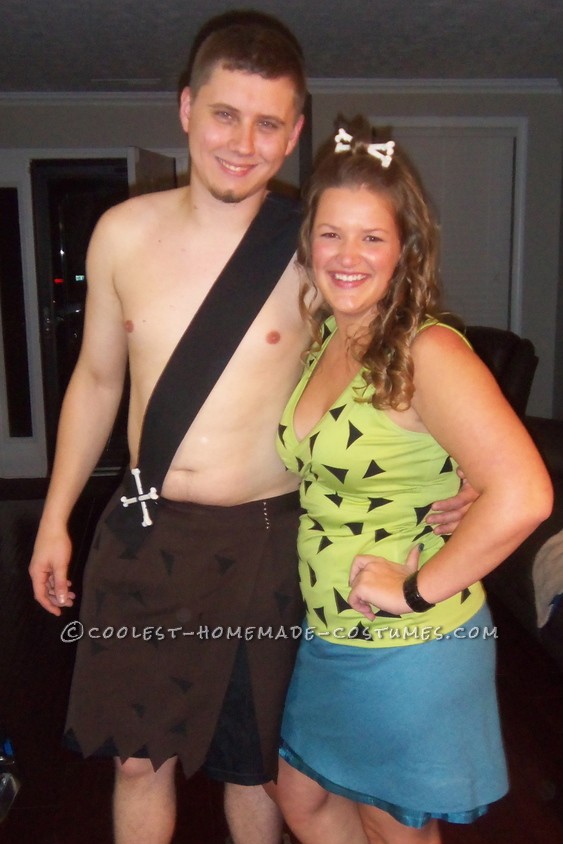 I made both the Pebbles and Bamm Bamm couple costume for under $25!! MATERIALS: I was able to find a teal skirt, green tank, brown skirt and a black shirt (cheaper then material) from Goodwill $8.00 Heat’n Bond from Walmart $3.00 Small plastic bones and Caveman Club from Halloween City $10.00 & $2.00 Thread (Tan … Read more 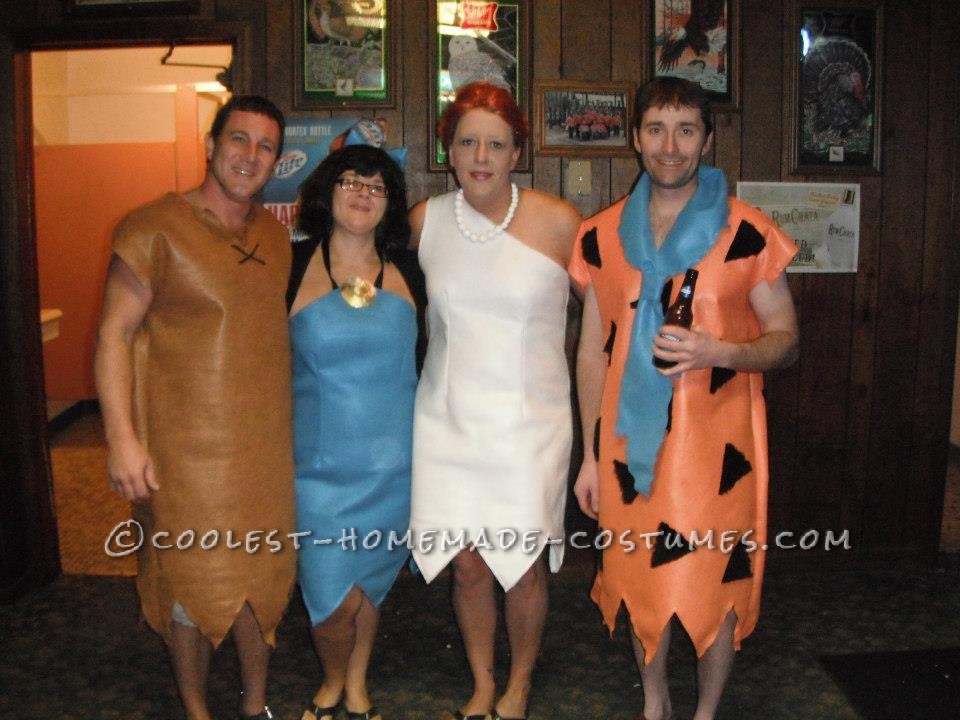 The idea for this Flintstones group Halloween costume all started with just Wilma and Betty as us girls had to bar tend the night of the Halloween party at our local bar ~ and it GREW into the whole Flintstones gang including “The Great Gazoo”. I found a sewing pattern for the Flintstones costumes. Not that … Read more 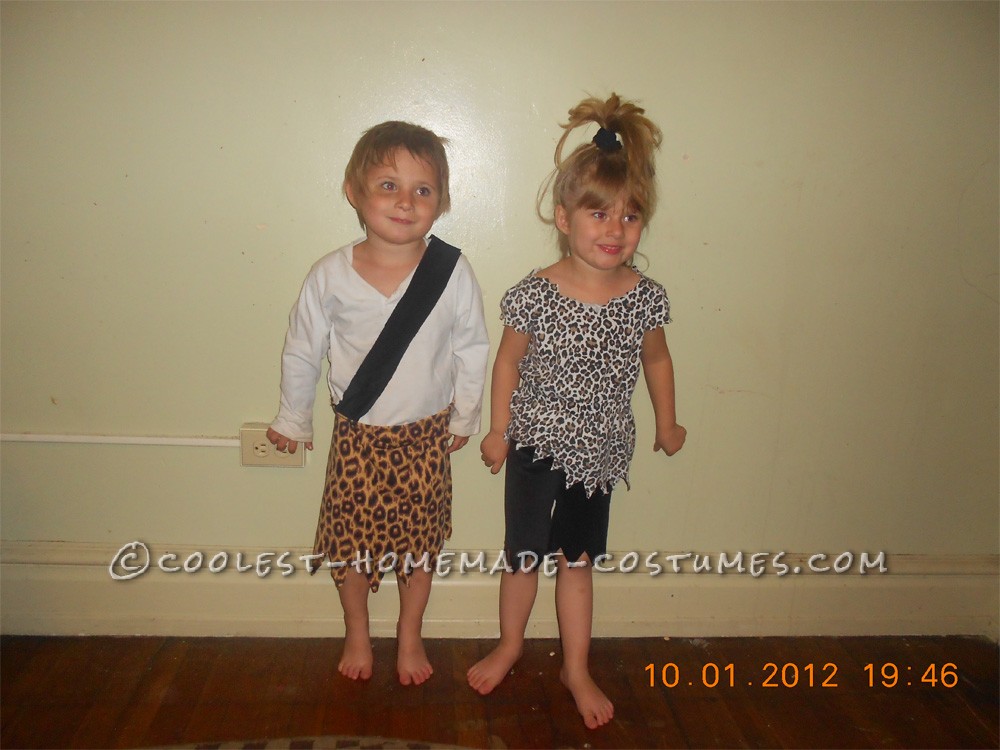 These are my children’s Pebbles and Bamm Bamm homemade Halloween costumes.. Four year old Pebbles – pants were hand-sewn out of felt material (measurements were made by guesswork). Top – Over sized leopard print T-shirt cut up. And hair tie- bone molded out of playdoh and left to harden for a week ten glued onto … Read more