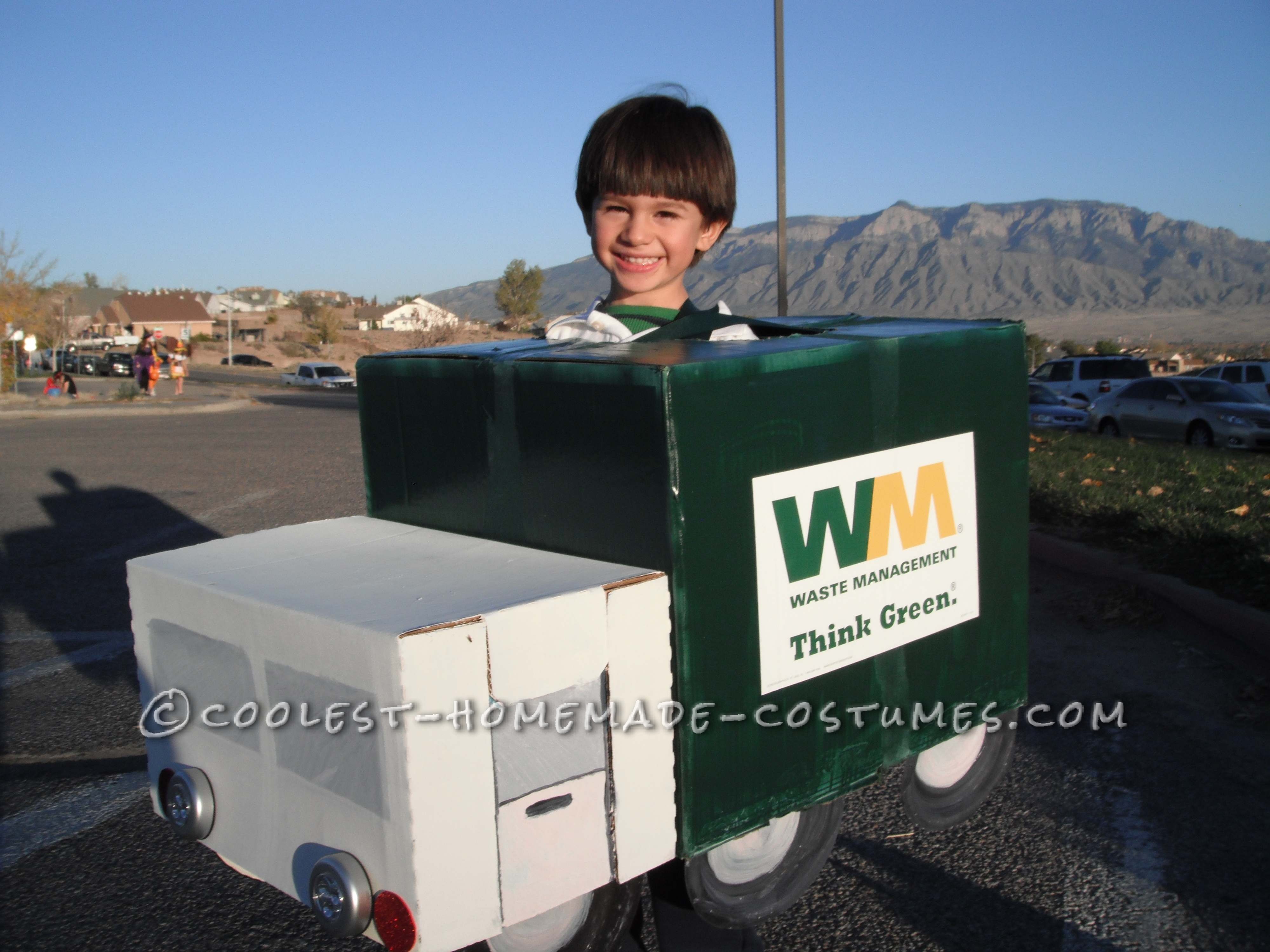 My son was, and is still, obsessed with garbage trucks. So, naturally, he wanted to be a garbage truck for Halloween! I had my work cut out for me, but was up for the challenge. We still had a couple of moving boxes, so I used one large and one small size box – the large was for the body of the truck, the small box was for the front. First, I spray painted a Kelly green color on the body of the truck (large box), and white on the front (small box). FYI, make sure you know the direction of the wind when spraying outside, and put a plastic garbage back underneath! Once dried, I hand painted the small box to look like the side windows and doors of the garbage truck. I estimated where my son ‘s head would go and cut a small hole on the bottom of the large box. You have to make sure that the hole for the head is not too far back or too far front, as this will throw off the way it sits on your child ‘s shoulders. Once I made a larger hole, I used small screws and pinned the small box to the large box, so that the smaller one sat lower. I had to buy kelly green fabric material to make straps that would crossover my son ‘s shoulders to keep the truck on. I used a heavy duty stapler to secure each, and made an  “X ” of the straps so it would balance. I went to my Waste Management location, and they were more than happy to give me some logo stickers for the side and rear of my costume. I also bought some reflective red foamy paper which I cut out in circles to put near the headlights. For the tires, I used paper plates and painted them black on the outside, then stapled them to the inside of the truck. To make it even more awesome (and for safety reasons) I went to my hardware store and bought some headlights that stuck on the front, and were perfect at night not only so we could see, but to make it look like an authentic garbage truck. That night, we had small kids telling their parents they wanted a costume like my son ‘s (sorry, parents!) and we actually had people applauding as we walked around! Nothing but positive comments, which made me feel good and best of all, I was happy that my son was thrilled with the results! We happened to run into the district manager of WM who lived in our neighborhood, and he ended up giving my son a tour of WM the next month. My son was thrilled, and best of all, hegot to show off his costume for the WM crew during the tour! He\’s determined to buy a garbage truck some day :)