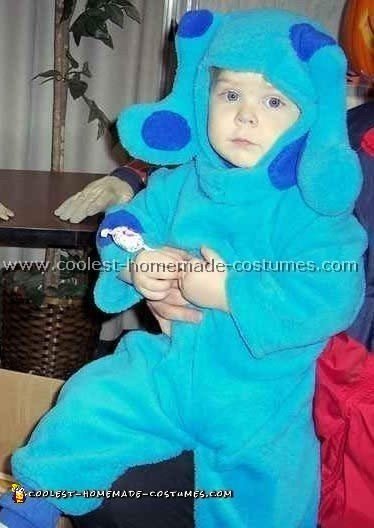 My two year old loves Blue’s Clues so I decided on a Blues clue costume for Halloween. I went to the sewing store and bought a pattern for a basic dog costume. I bought light blue fleece for the base and dark blue for the spots. I had to make my own pattern for the ears and tail to look like Blue’s. It was very simple.

Of course Blue is usually light blue with darker spots but using what I had, I made his head and tail dark with light spots and body had dark spots. I fixed ears on the hood and attached a tail to the body and then fixed spots using a fusible web. It took me about 2-3 hours.

But I must confess that he was shedding his spots one by one. I also made the famous paw print like a badge. And he wore his Blues Clues shoes because it was raining and muddy outside.