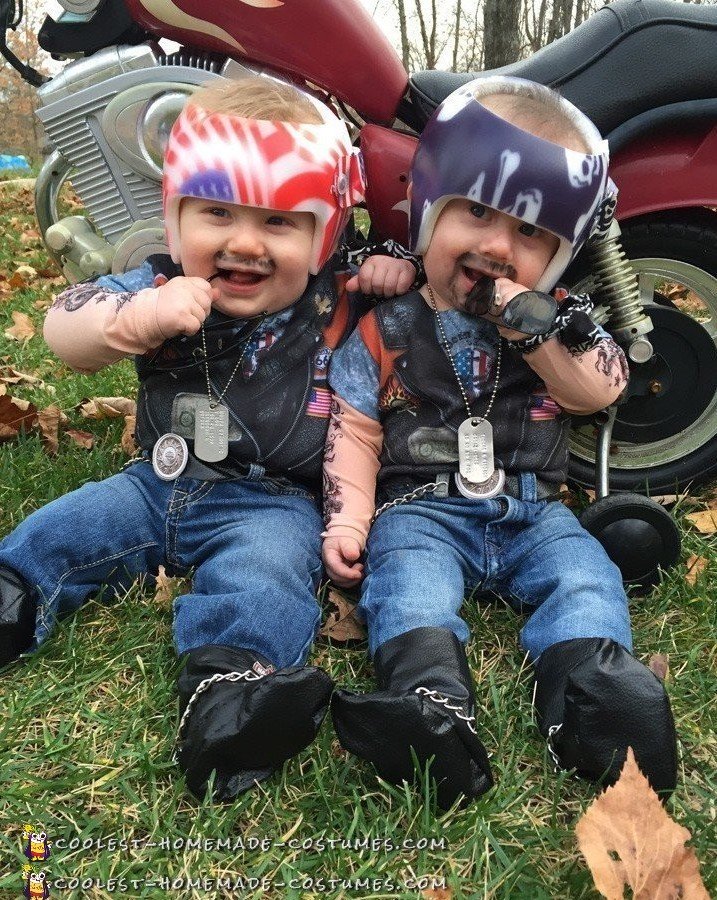 The background behind our biker baby twins Halloween costumes:

So, they were fitted for orthotic helmets which they wore for 23 hours a day.

When Halloween rolled around, we brainstormed how we could incorporate the helmets. We considered making baby twins Halloween costumes to cover them, but the helmets have such cool graphics on them.

At first, we thought about making them a pirate and a soldier to go with the graphics. Then, at the suggestion of a family member, we decided to make the helmets the driving force behind the costumes.

Thus the Biker Twins were born.

In addition, we wanted to add as many cool details as possible.

1. We purchased aviator sunglasses. (unfortunately, we couldn’t get them on because of the fit of their helmets, so they are holding them)

2. The facial hair is make up.

3. The dog tags are actually their dad’s on a shorter chain.

4. A strip of black bandana to tie around their wrists.

6. We already owned the blue jeans and added the chains.

7. The belts are made of “fake” leather with a cool wheel belt buckle photocopied and mounted on cardboard.

8. We made the boots from a free cowboy baby bootie pattern found online, with adjustments to the design to reflect more of a leather biker boot. Each boot has 4 pieces and was both hand sewn and machine sewn. We added the chains and the Harley logos.

9. We made the POA/MIA and American Flag props. For the photo shoot, we borrowed a neighbor’s toy chopper.

We always get a lot of attention when we walk around with our double stroller, but when the boys wore their costume, were were stopped by everyone! People loved them and we got a lot of comments like “adorable”,  “creative” and “hilarious”. Consequently, they even won first place at a costume contest at a local Amusement park!

Our boys were born 8 weeks early and spent 5 weeks in the NICU. As a result, Gabriel has a non-functioning kidney and both boys were on apnea monitors for 3 months. The helmets are just another hurdle to overcome.

We never want anything to hold our boys back and we are so glad we could make the stress of wearing the orthotic helmet into something fun. 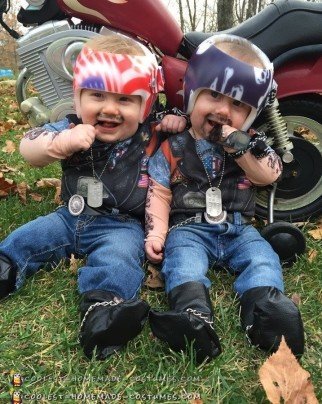 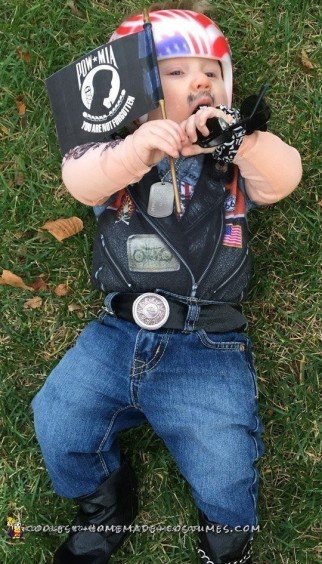