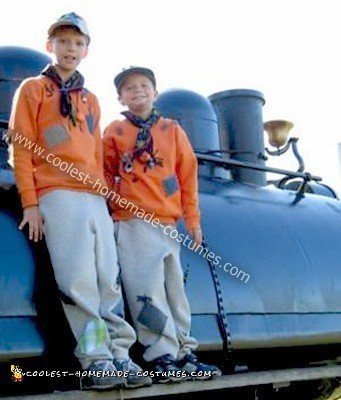 My Grandkids end up with store bought costumes every year. So this year I wanted to make something we all could be alike. I had fun making us all look like Ho Bo’s. We even got free food at two different places. We had so much fun at Halloween.

My grandkids thanked me over and over for making their very own costumes. They are 100% boys, so they really love bugs.I decided to take them to the city park,before we went trick or treating. That’s when we made pictures. Glad the boys dad went with us. So he could take the pictures. I made him a costume also, but he only put the hat on.

I bought a big bag of bugs at Wal-Green for only $2.00. Spent about $5.00 for the other bugs at Wal-Mart. I already had old clothes for my self. Bought the boys sweats at Wal-Mart as well for $20.00. My girlfriend asked if she could take the boys costumes to work to show them off. She said every one liked them.

The boys got lots of candy. They were pretty tired by the time it was over. They asked what they were going to be next year. I told them we have plenty of time to think about that. The boys parents thank me as well for taking the time to make the Homemade Halloween Ho Bos Costume.