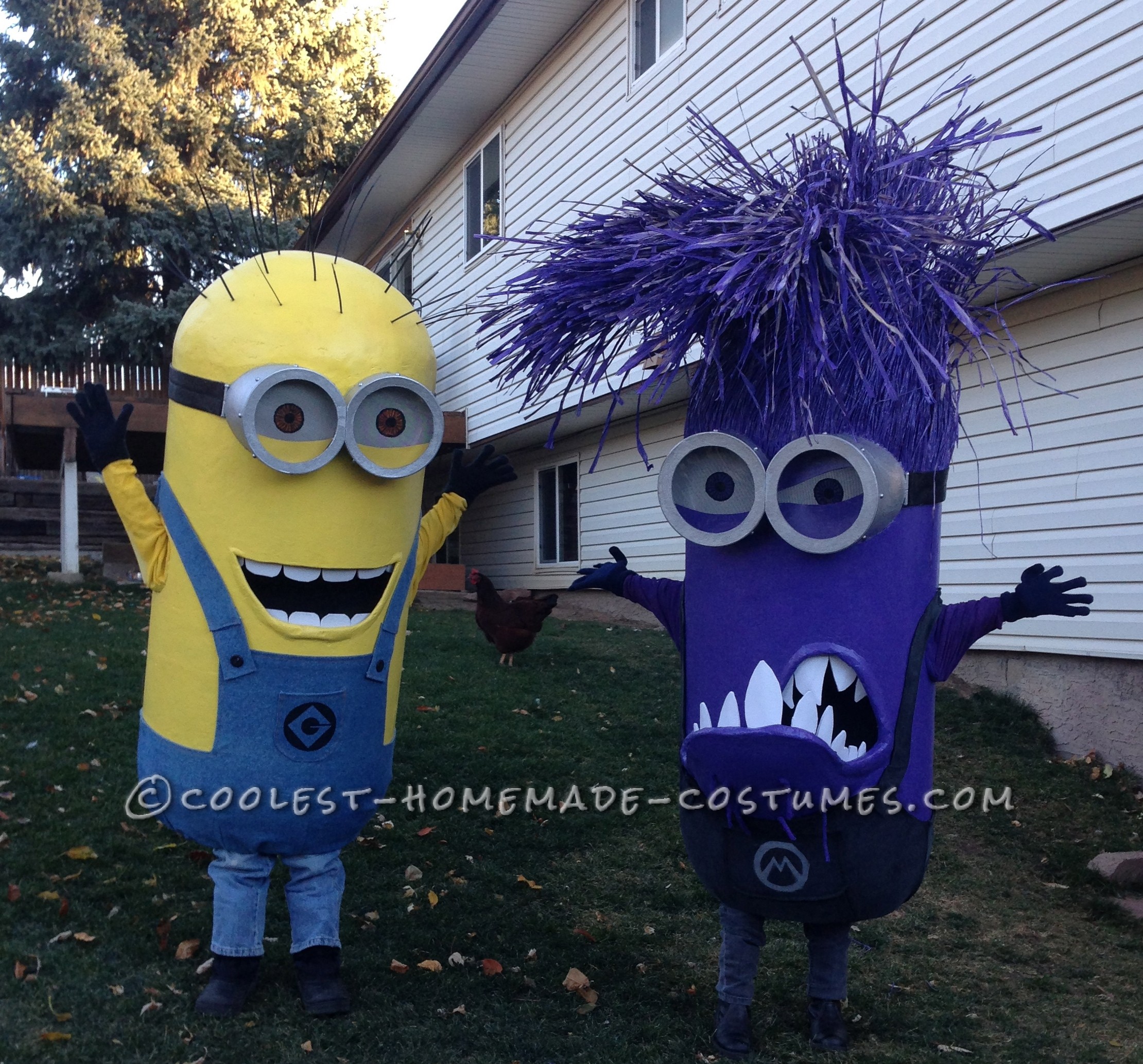 These costumes were basically set to be made after watching Despicable Me 2 with the family, the two youngest ones were hooked. I did however start this project a little late, it was the weekend before Halloween. After I completed the shells for the body I went to bed early on Monday, Tuesday I woke up at 3:30 AM and did some work, and when I came back from work I continued working on them until 5:30 AM Wednesday Morning. I then slept for 4 hours, called in sick to work and got up at 10:00 AM Wednesday, this was the last time I slept until Friday morning at 1:30 AM. I worked all of Wednesday through the night and all day Thursday until trick or treat time.

My Son and Daughter were Sooo happy and became instant celebrities on Halloween night, people kept stopping them to take pictures with them both. They were the main attraction; people also liked the good and bad minions walking down the street together. I hope everyone enjoys these photos and maybe it will help with some ideas for next year. 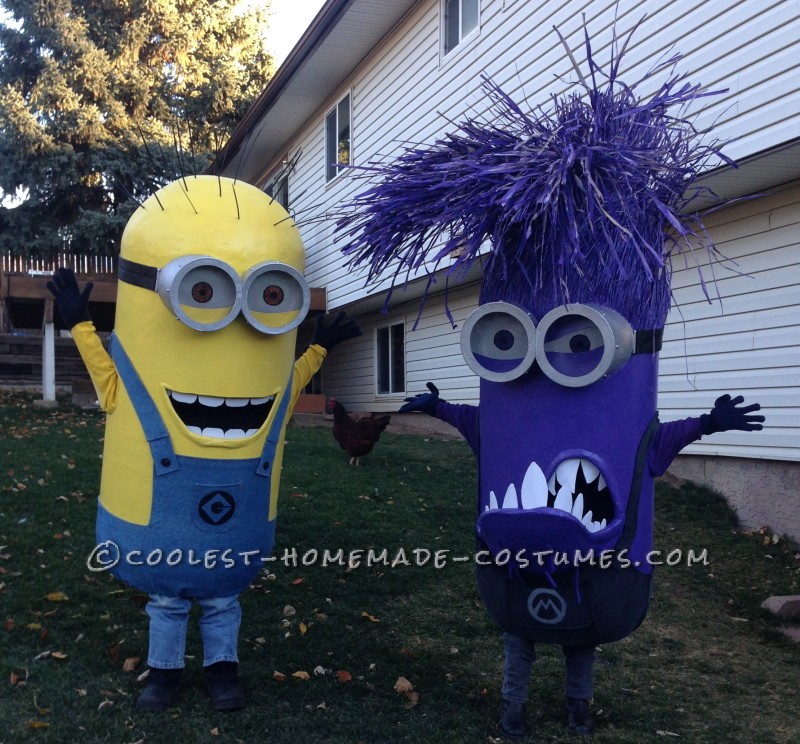 The Kids in the costumes

I wanted to use Fiberglass instead of cardboard because it was lighter and 5 and 7 year olds were going to be wearing them. So I started off by creating a mold structure with, two 20in bicycle wheels and taped them to yard sticks to get my general form. I then bought two 12” X4’ Quikcrete tubes, cut them in half and formed them around my structure tight with masking tape. I filled an exercise ball at the top to create an evenly rounded head for the mold. I covered the mold with cellophane to ensure that if the resin leaked through my mold wouldn’t get damaged because I needed to make two.  I then covered the mold with red resin paper and masking tape; this was going to be part of the costume but also way to slide my mold out when it was ready. 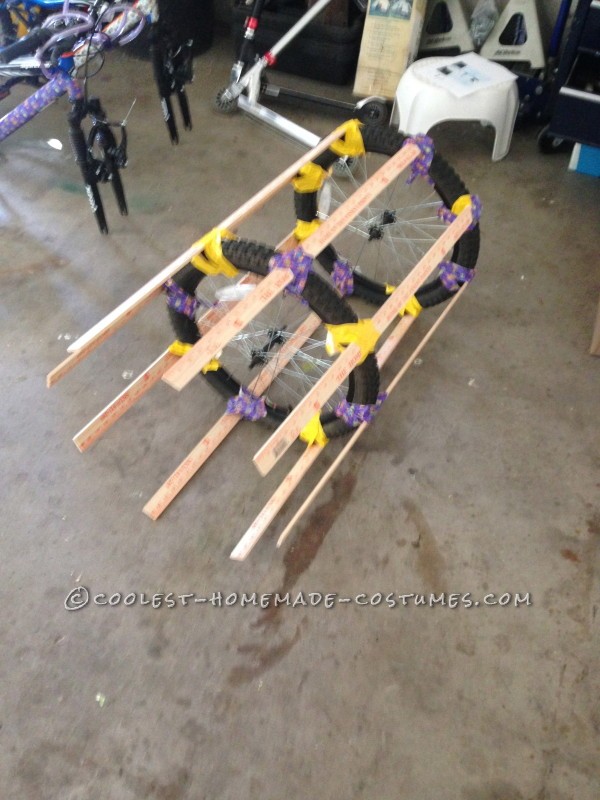 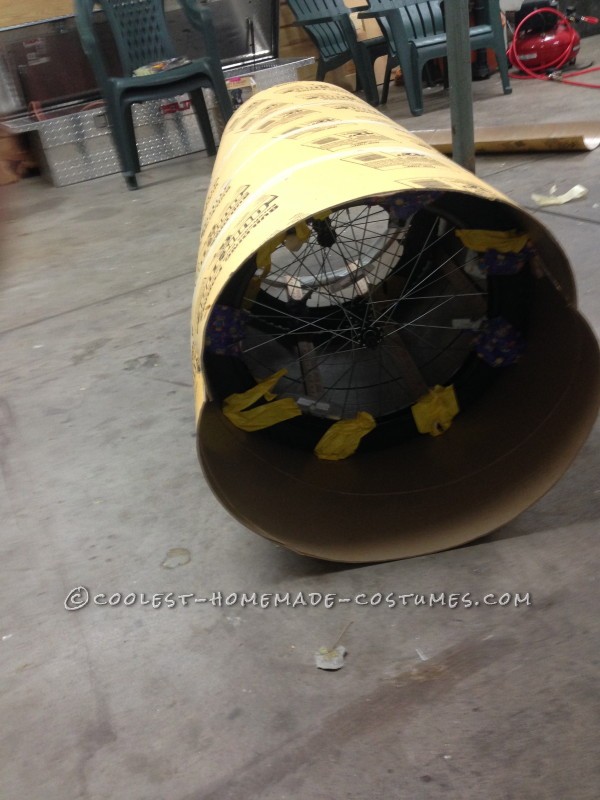 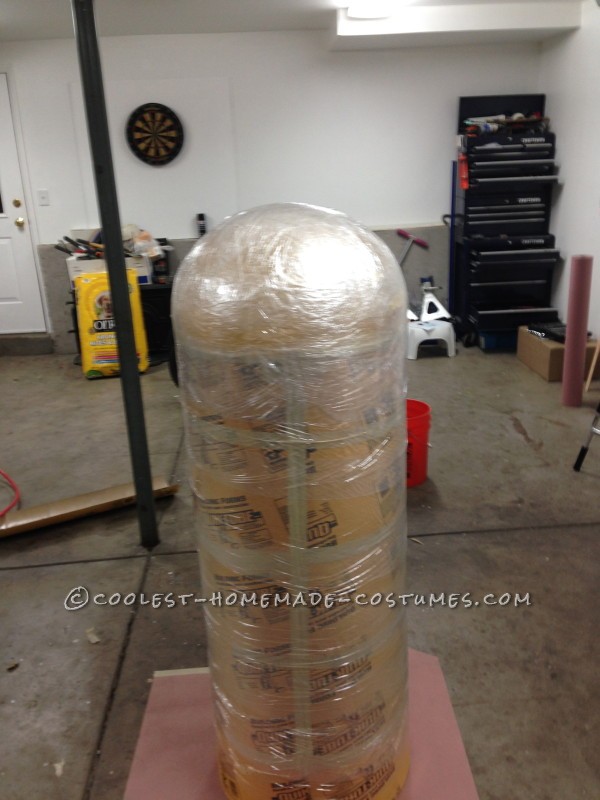 Now it was time to apply the Fiberglass and resin, I did this for a total of two layers on both minions. Once I had both shells, I again used the exercise ball covered in cellophane to create the half rounded lower part of the minion and the entrance hole using fiberglass and resin. Once dry sanded them down smooth and used the kids to mark locations of the eyes, arms, and mouths based on the height the minion was to be off the ground. The purple minion’s lower mouth was made of foam from a hobby store reinforced with fiberglass and resin on the inside. I used paper towels and masking tape to create the lip profiles on both. 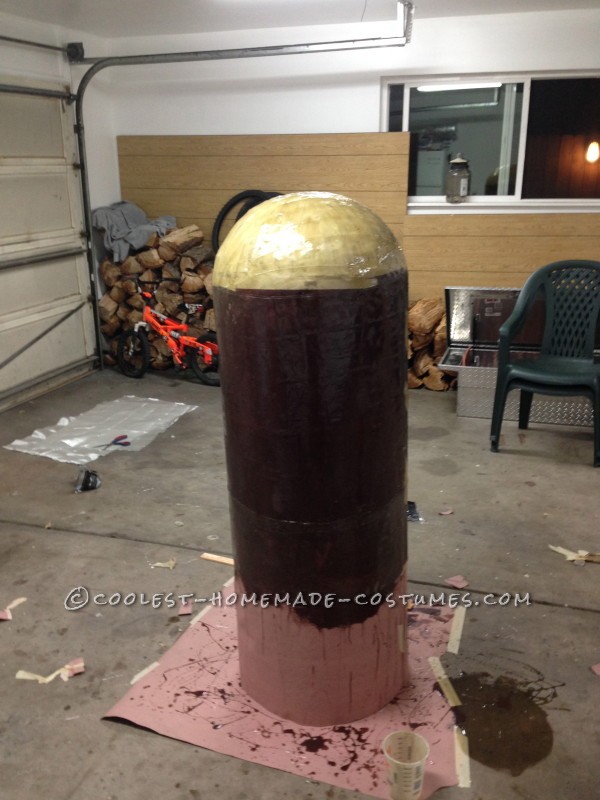 Twice coated with fiberglas and resin 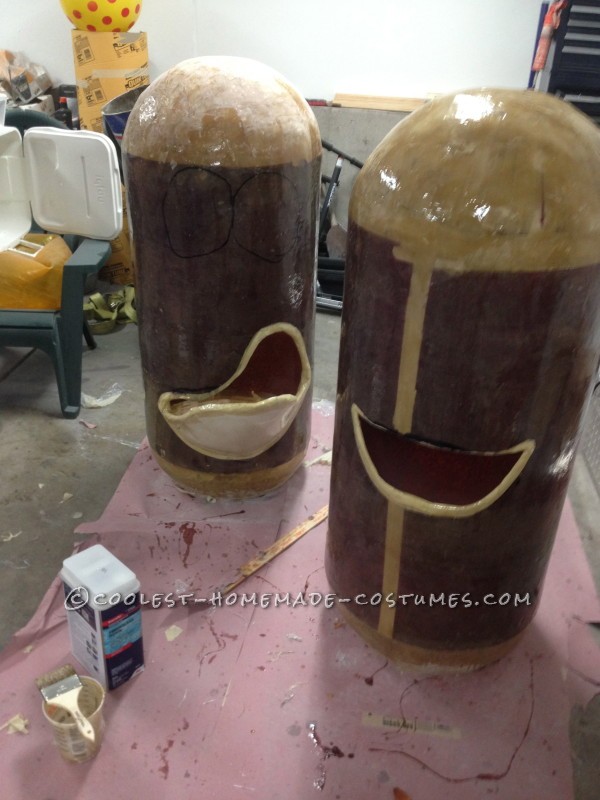 Adding mouths, and finguring out where the Eyes and Arms will be

To make the eyes I painted fiberglass screen, just like the kind used in windows so that the kids could see but you couldn’t see them. The goggles were made from round Paper Mache boxes that you get from a hobby store, Plexiglas, and pencils and half pearl bead stickers. I cut the sleeves off of two shirts and fixed them from the inside out with resin and tape. I used a tee shirt for the internal suspension for comfort, it serves two purposes, the main purpose is to hold the costume up on their shoulders, and the second is to create a candy basket, this way they don’t have to carry bags, people just drop candy in the minion’s mouths. The hair for the yellow minion is black zip ties; I just drilled holes in the head, stuck the tips through from underneath and pulled them from the top. The purple minion’s hair was created by using two 9’ X 30” grass table skirts, I painted them, and then rolled them outward starting from the top center and working my way down and out until it met with where the head band was going to be. The head band was mad by using red resin paper and folding it inward from both sides and then using staples to simulate stitching. All colors were done using a new spray latex paint from Rustoleum . The two main colors were Grape and Sun Light. My wife hand made the overalls for both, existing versions would have been too hard to fit. The kids wore jeans the same color as the overalls for comfort in movement, but the illusion looks as if they are part of the overalls. 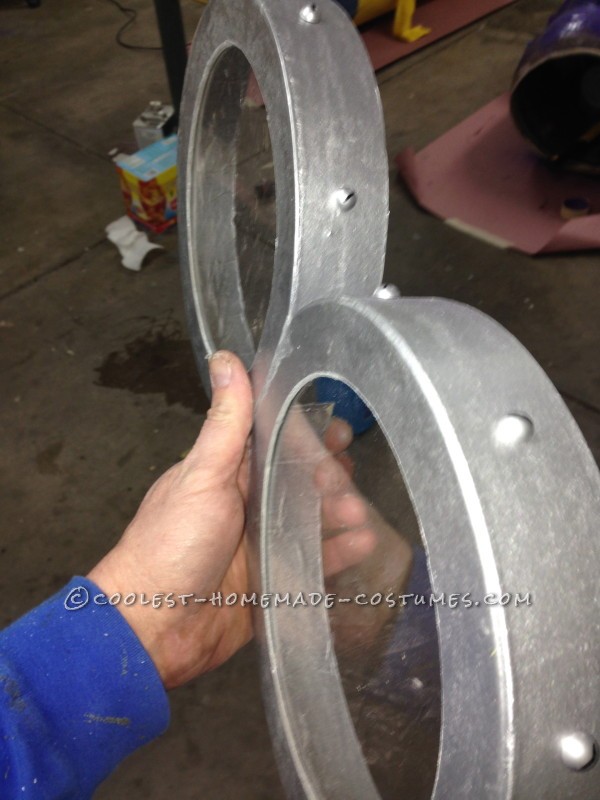 The Goggle caps and lenses 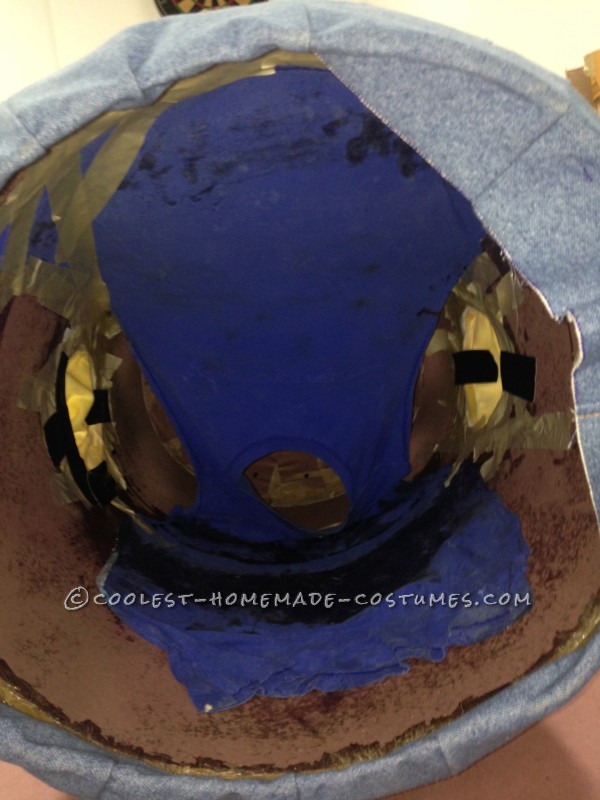 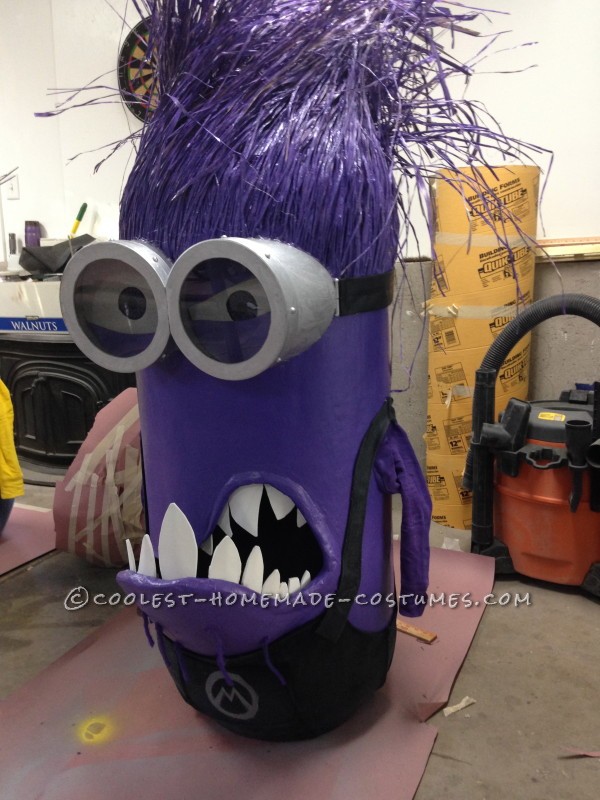 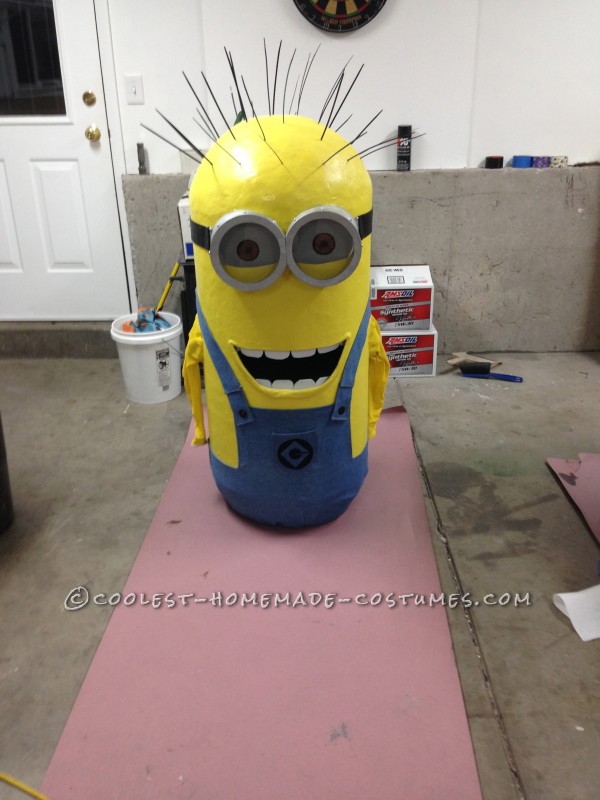