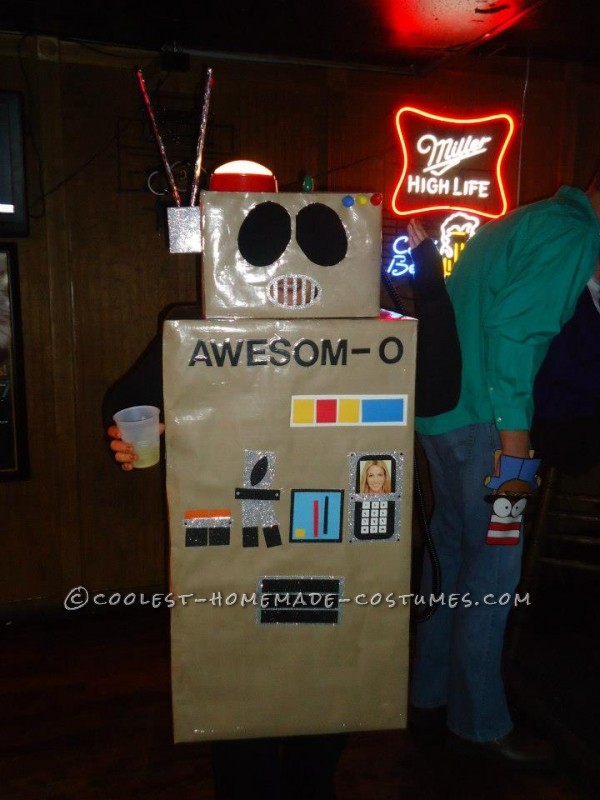 This year I went as Awesom-O from South Park. I went in a group with about 10 other people including the 4 main characters, Towelie, Mr. Hanky, Kyle’s mom, and Mr. Garrison.

I work at a Nursing Home and have access to adult incontinence brief boxes. I tore down the boxes and reconstructed the boxes to fit fairly snug around my body. I then took another box, deconstructed it and taped it on top of the larger box. I cut off 3 of the 4 top flaps of the box and left the 4th. I taped the flap to the top of the back of the larger box. I reinforced this seam with a TON of tape. I put the head on a hinge in essence because…how is Awesom-O supposed to take a shot through the mouth of the box?? Then I cut out holes in the top of the box for the head and the sides for the arms. I reinforced the arms with additional cardboard to ensure the box wouldn’t tear due to the weight of the box.

I then secured all of the seams with a ton of duct tape. After this, I bought natural postal paper and wrapped the entire box in this paper. I used clear packing tape to secure this to the cardboard box. It ensures a clean look while providing the stability required. Once the costume was wrapped in paper, I covered every inch of the boxes in packing tape. This successfully water-proofed the costume so if any drunk people spilled drinks on me, it wouldn’t stain the paper.

I then cut out the can opener, the batteries, the cell phone, and the other paper elements out of paper and hot glued them onto the box. One modification I made to the costume compared to the original character is the background of the cellphone. In the original, there is a piece of red paper. To reflect details of the episode, I made a photo of Britney Spears the background. If you know the episode, you will understand the reference. I then bought little clear lights and painted them to reflect the colors on the original character. I cut holes in the cardboard box and set the bulbs inside the holes. I bought a spare phone cord and cut holes in the cardboard box and placed the cord inside the holes. When the bulbs and the phone cord were in place, I hot glued them from the inside to the box to ensure they would not move.

I then cut a hole out of the face box and glued a piece of paper atop the hole to reflect the mouth. I spaced the vertical bars of the mouth wide enough apart that I could fit a straw between. I then cut holes out above the mouth to make the eyes. I took black pantyhose and stretched it across the eyes to have the clean look of the eyes while not having any evidence of eye holes that others have. This way, it appeared the eyes were totally black (as is on the character) but still allowing me the ability to see out.

I then bought a  tap light and painted the base of the light red. I used hot glue to adhere the light to the top of the box. It was rock solid. It was the interactive piece of the costume. Strangers were coming up to me all night long and tapping my light. When the light was on in the dark bars, I was like a beacon of light in the darkness. It brought sooo many people over to me to check out the source of the light. It was like a spotlight.

I then made the base for the antenna. I cut pieces of cardboard out to get the right shape and taped it to the head. I used dowel rods to the size I wanted, wrapped them in aluminum foil. I cut holes in the silver box and stuck the rods into the box. I then glued the rods to the box from the inside so they wouldn’t move.

In total, the costume was very inexpensive (approximately $20) but labor intensive (about 20 hrs of work). Having said this, I have never had so much positive feedback.

I had people coming up to me all night asking to take pictures with me. I won 3rd place and 1st place in 2 separate contests. People were chanting “Awesom-O, Awesom-O, Awesom-O” during the contest I won. The DJ said during the judging “I don’t know what you are but that is an awesome costume!” I replied “It’s not just awesome, it’s Awesom-O!” I then burst into the robot dance. Apparently he doesn’t watch South Park. Haha. Soooo much fun! Gonna be tough to beat next year! 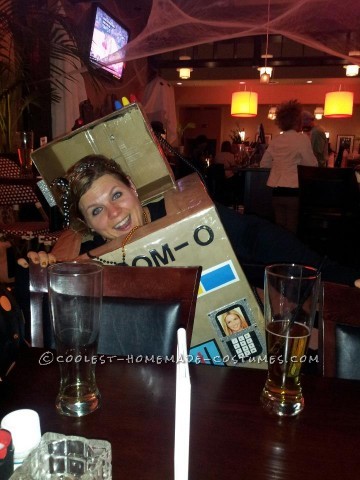 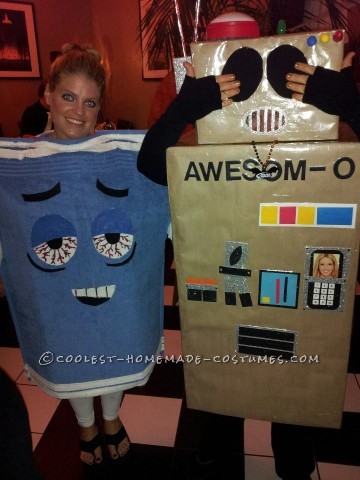 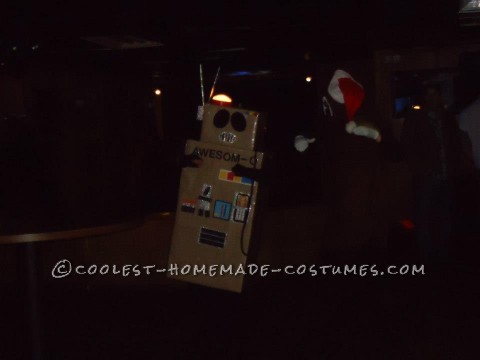