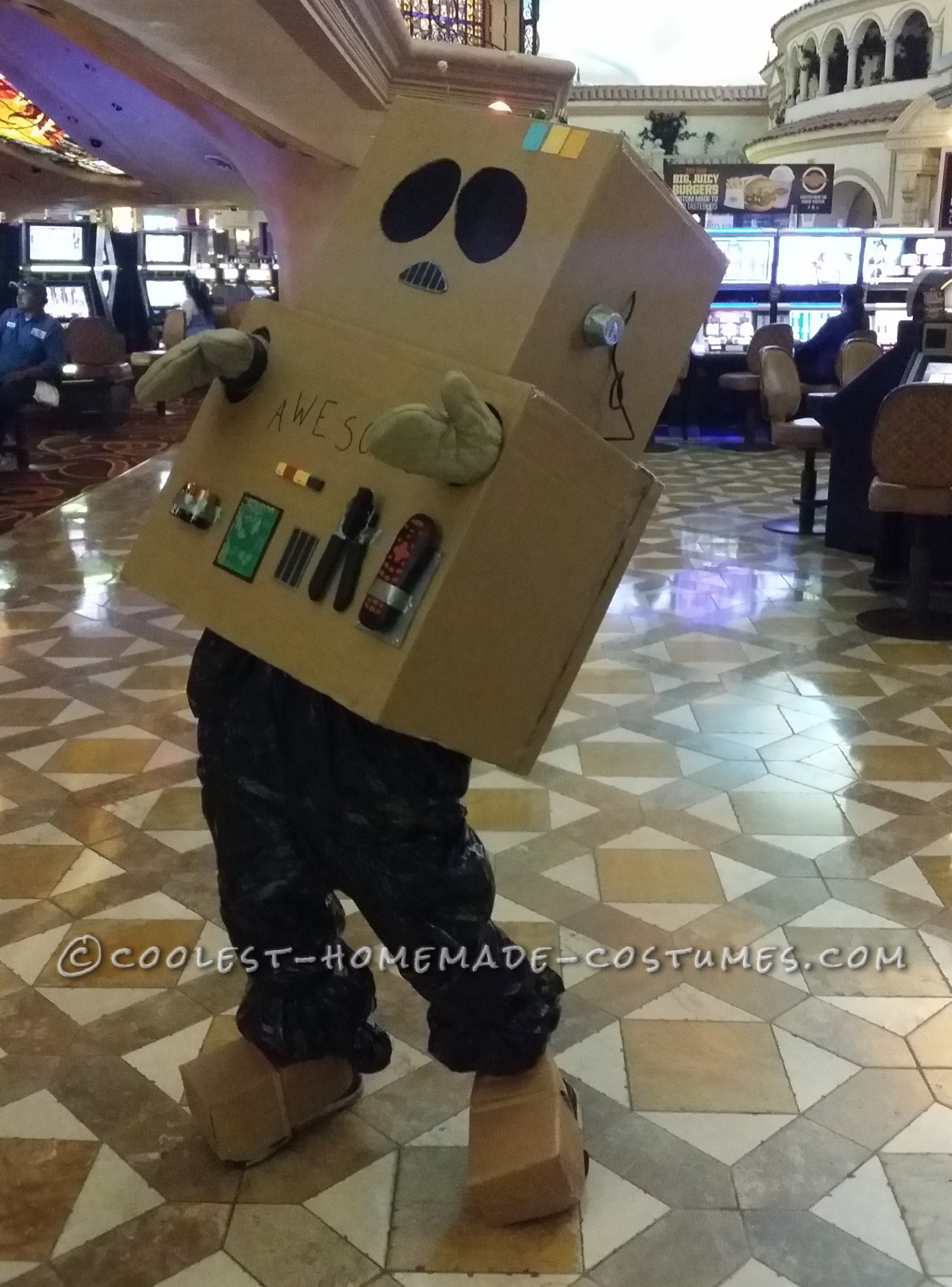 I was watching some South Park reruns while researching local Halloween events and became inspired! I decided to make my own costume, modeled after my favorite South Park character: A.W.E.S.O.M.-O!

I had no clue where to start but I drove down to my local Walmart to get ideas. They were restocking their aisles at the time so I asked them for a bunch of boxes to use for the body of the costume. I spent $1 on some black trash bags to go with the costume too and stopped by the Dollar Tree store for two oven mitts at $1 each for the hands of the costume.

I already had some permanent markers, 3-M glue, hot glue, colored paper, staples, zip ties, foam sheets, silver duct tape, packaging tape, a remote control, D batteries, a can opener, a broken board from an old computer, a power outlet, foil, a wire hanger, a quarter machine capsule, a broken light bulb, fabric paint, acrylic paint, cotton balls, a Ziploc bag, a power cord from a broken joystick, an extension cord, and A BUNCH of other super cheap supplies and junk laying around the house that I could put together to make the costume.

After about two days worth of work and only $3 spent at stores I ended up with this! I’m not gonna lie; it can get pretty hot inside this costume but it’s SO worth it and so funny walking down the street and stopping in the nightclubs here in Vegas (my hometown) getting all the laughs and having everyone I pass stopping and asking to take pics with me! Maybe next year I’ll go as Mr. Hankey!

Here’s a bit about the costume: After making a Master Shake costume (from ATHF) to share with my husband, I decided we needed a second costume so we could take turns wearing each, but both be dressed up at all times. I’d just finished making the Shake costume when I got the idea for this costume and went out to Walmart to get boxes and trash bags. I had to get REALLY creative with this costume and I put in a lot of hours doing odd things like…

That was just the start of it all! Fortunately, the ideas for each bit came about one after another so the whole project only took a couple of days!

Once finished, my husband and I took it out on the town (Vegas), along with the Shake costume I’d made for Halloween and got so many laughs, fingers pointed at us, people asking to take pics with us, people yelling things like, “Look, it’s A.W.E.S.O.M.-O!”, people dancing with me when I stopped in a nightclub to do the robot, and several people trying to tip me $1, $5, even $20 because they loved my costume so much! It was so fun. Five people even bought me drinks and drank with me!

It was hard work, but so worth it and after this I’ll have the coolest prop ever to leave in random corners of the house! 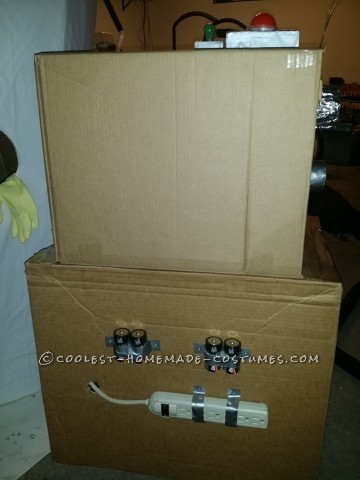 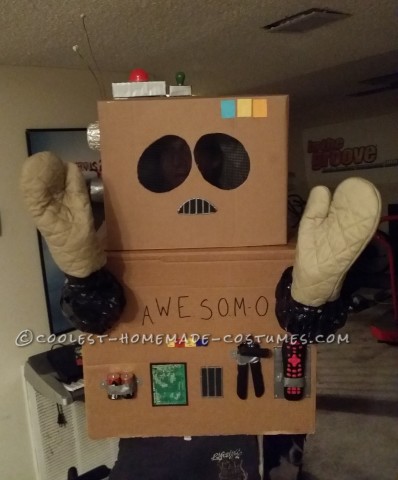 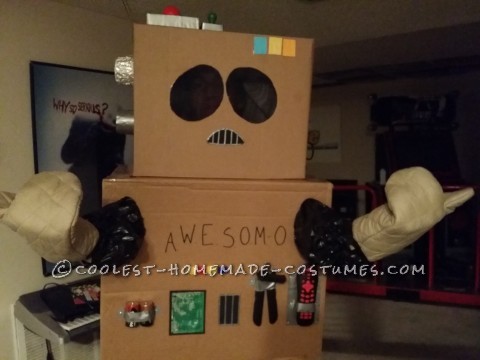 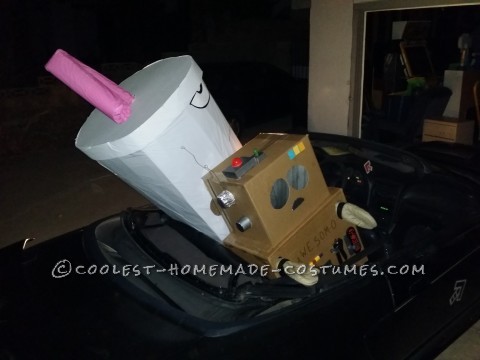 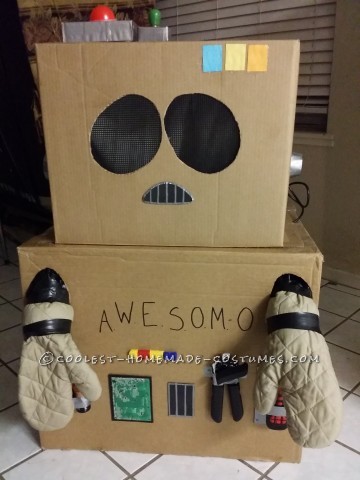 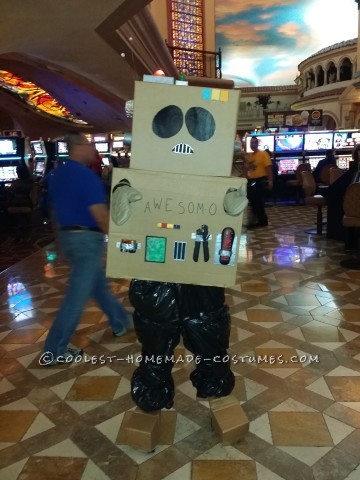 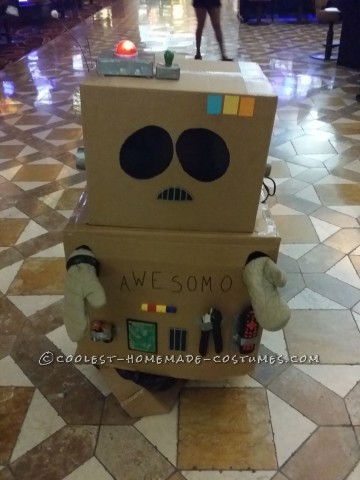 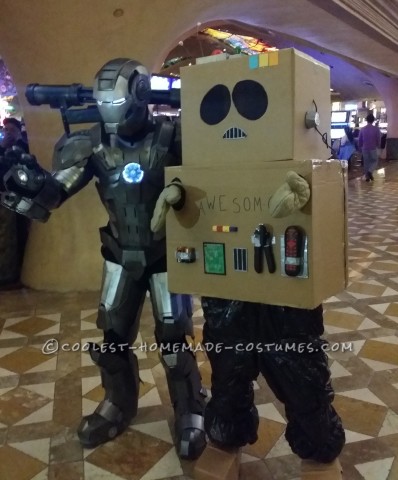 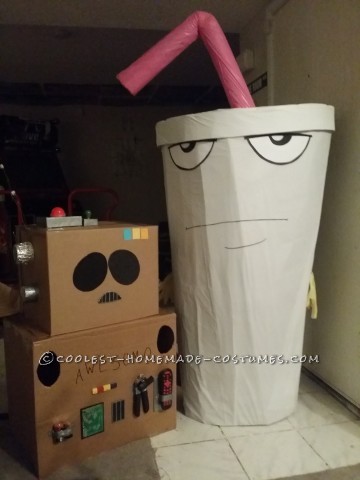