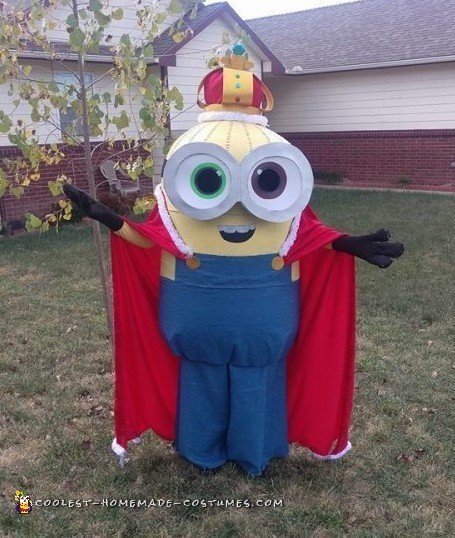 Hello everybody! I’m Savanna and this is my King Bob the minion costume! I have been making my own costumes for around 4 years now. Making costumes is something that I really love and enjoy.

The idea for this Minion costume actually came from a friend of mine. She works at a local college and every year they do a themed ‘trick-or-treat’ through the campus and the students give out candy, it’s really cool. This year’s theme was Despicable Me, and I had made a minion costume YEARS ago and she asked me if I would wear it and take pictures with the kids. I told her I would love to and that I would pull it out of storage and see if I could fix it up a little. Long story short, the costume was HORRIBLE and there was no way for me to fix it and get it up to my standards, so I decided to just make a new one.

I made the body part of the costume by using three $7 camp pads from Walmart, and I cut them so that they would make a dome shape. I used a mix of hot-gluing and sewing to make this costume stay together. After I got the body of the minion done I moved onto the goggles. I used leftover pieces from the camp pads and craft foam to create the goggles and I painted it with silver acrylic paint.

Then I started on the cape. This was probably the easiest part of the costume because all I had to do was glue on the fluffy white material to the bottom and top of the cape.

Next I taped off the goggles and spray painted my costume yellow. (I hadn’t attached the cape or the crown at this point.) After I put about two coats of spray paint on my costume I sprayed a clear sealant all over it to keep the paint form chipping off. Next I made the overalls. These were actually more difficult then I thought because I had to make leg holes but I still needed room to fit through because that was my only way into the costume. Eventually, after some brainstorming, I just attached the pants onto either side of the costume and used Velcro to attach the middle of the pants together after I was in the costume (That’s probably the worst explanation ever… oh well). Next I glued on the crown and cape and then I made the gloves and glued on the goggles strap and he was done!

I worked on this Minion costume for five days and it cost approximately $90 to make. I am really happy with how this costume turned out!

I had a blast making and wearing this costume! It was so cool to see all the little kids faces when they found out that they could meet King Bob. It was a really fun experience, and one that I hope to do again soon. The reactions I got varied from each person, some kids were SUPER excited, some were a little shy, and others were scared by the huge minion. But for the most part everyone liked it. Some of the reactions I got were:

I also want to point out that I am not, in any way, a professional costume maker. This is just something that I like to do for fun. I hope you like this costume! If you have any questions regarding this costume, feel free to leave them in the comments :) 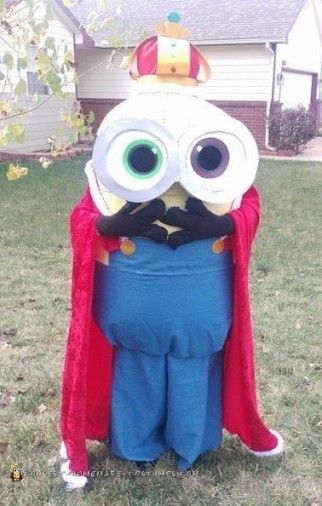 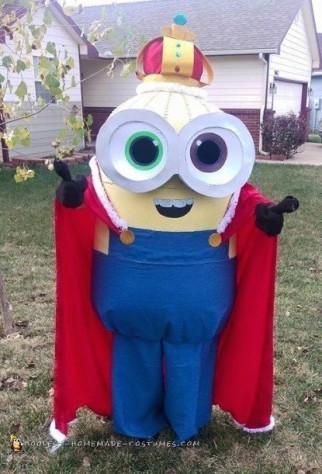 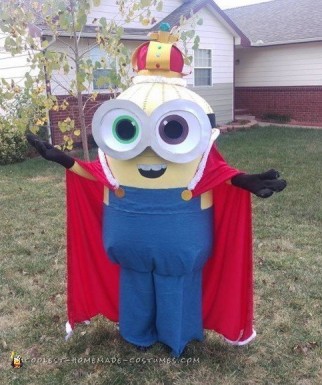 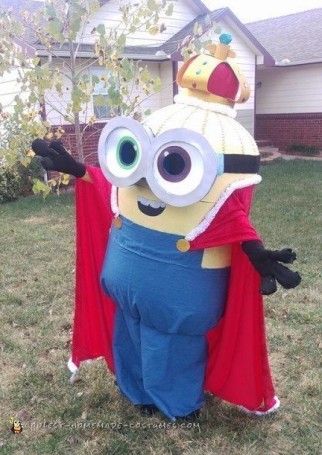 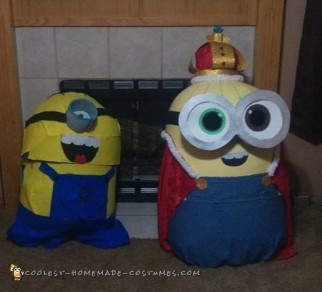