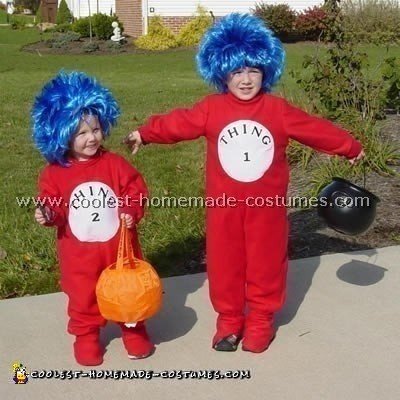 For this Thing 1 and Thing 2 costume I bought a sleeper pattern that had a back opening for the main piece and used red fleece material.

For lettering: cut a circle (trace a small plate)of white felt and I used 1 1/2 inch iron-on letters to spell out Thing 1 and Thing 2. I found it easiest to just sew the circle onto the front; it would have been easier if done before I sewed the front/back together but it worked fine to sew it on after costume was complete.

I made little red spats to cover the kids shoes and used a strip of Velcro to close the back of the costume. (It called for a zipper but I thought that was unnecessary for a costume.) Blue “punk” wigs were of course found on eBay for about $10 each. Surprisingly easy and the result was awesome!