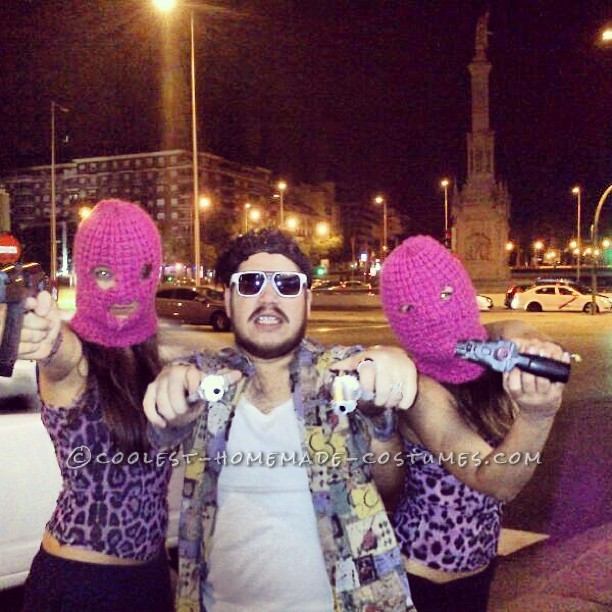 Well since Spring Breakers is such a crazy film with oddball scenes and experimental narrative, it would of course be a good inspiration for unique and ballsy characters. So Alien and his female cohorts go through a range of costumes that are truly out there but there is one particular scene that gave us the most iconic imagery of the whole movie. It´s the one with the second Britney Spears song, the one where Alien sings along with a white piano and the girls start dancing a la ballet with machine guns with the cotton candy colored skyline as background, you know which one I´m talking about right? So I told my friends it would be a great costume and they hadn´t seen the movie. So days before the actual Halloween date they saw it and were instantly excited because they liked it and especially the wardrobe, so we agreed to go together as them. The scene is instantly cult worthy and will make you stand out like a sore thumb on any party. What you need for Alien´s costume:

First I went to a vintage store and bought a hawaian miami-esque 90´s shirt that resembled the one Alien had on the movie with bright yellows and electric blues. Then I already had a wifebeater and the shorts so I was good on that front. The red sneakers as well. Then I went to costume store and bought a shoulder length black wig, the rings and gold watch. So on the day of Halloween I called a friend for him to make my wig into cornrolls which was extremely hard and there I wished I had longer hair. It took him about 2 hours with me sitting down and him trying to braid synthetic hair. I do not recommend this at all never try to do cornrolls on a cheap wig, it´s literally the equivalent to hell. One side of my head was completely bad because cornrolls are supposed to be on your roots and since wigs dont have roots, a big hole was there. We thought it looked funny and we worked hard on them so it was even better. I put on everything on and lastly I had a friend do some fake tatoos on both my arms and neck similar to the ones Alien has. And the cherry on top was the grillz I had done with aluminum foil that you can´t really appreciate in the pictures but up close it´s what got the funniest reactions. I spent for everything about 35 euros(wig, rings, watch, hawaian shirt) and it was money well spent, I had a blast, people really thought it was a clever and fun outfit and if they saw the movie, they instantly knew and came up to us to take picture with us, especially random people in the streets. I had a l really fun time dressing up and the outcome was really worth the effort.

For the female cohorts. What you need:

This was more of an easy challenge for my friends because they had almost everything except for the zebra like top which they had to paint pink. The pink beanies had to be cut out for the eyes and mouth to breathe. The machine gun toys, top, pink paint spray and the pink beanies cost around 15 euros. So it´s a pretty easy costume but has a great impact. No one is going to ignore a hot chick with a pink beanie and a pink zebra striped top dancing ballet with a machine gun that sounded horribly loud. You have to play the part. And you can do it with three or four girls.