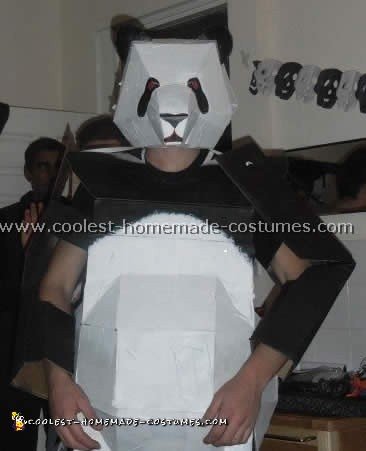 I started with the head. First I made the nose from one piece of cardboard which made it very stiff and strong. This was a good base to work from. I worked back around the head just using images off the web as reference and going freestyle trying to keep it symmetrical. I cut pieces of card and fit them to get the right angles and shapes to the head adjusting if necessary. The pieces were secured together using copious amounts of brown tape inside and out to get the strength required. The head in total took about five hours just in construction. The ears were the most time consuming part because I had to carefully cut the curved pieces to fit together exactly.

I started the body the next night. I thought it would be easier because there was less detail but in fact it took a lot longer because of all the logistics like how to get in and out of it or how to fit the arms and legs on and still allow movement considerations like that. In the end I had an upper and lower section to the body that slotted together to allow me to get in and separate arms and legs so I could move. It took about 12 straight hours of working all night to get it finished ready for paint.

The upper section of the body was just a rectangular box with arm holes and robot-like shoulder pads. It fit tight to my body so it was tough to get inside. In the end to get in I left one side open and then closed it up with paper fasteners once I was inside. The lower section of the body connected to the upper with paper fasteners once I was already inside. It had to be slid on over my head. This section has all the shaping of the abdomen to make it look more panda like. Because it comes down over my crotch I had to make a flap that swings up to enable me to go to the toilet!

The arms and legs of the panda costume were made out of a single bit of cardboard folded into a rectangular tube and with notches cut to allow them to fold and move in all the right places. I made one side first and then opened them out and cut around them like templates to make the other side. The legs are held up with elastic loops that go over my shoulders otherwise they would slip down and I wouldn’t be able to bend my legs. The arms are held up by elastic that connects them together like kids’ mittens (like the kid’s mittens in the film the shining).

I did a few tests runs with the bits to make sure they all fit and worked correctly. The tightness of the elastic took some adjustment so that the legs and arm joints stayed just in the right place. Once all this had been constructed I was ready to paint everything. I bought black and white spray-paint and did the base coat spraying the arms, legs, head and upper body black and the lower body white. The cardboard absorbed the paint so it dried quickly but also took a lot of paint to cover I would say two liberal coats over everything. I used two cans of black and ran out of white before I was done so had to finish with white acrylic. I neatened the paintjob on the body with acrylic using the brush to create a kind of fur effect where the black and white met. I got my friend Tash to paint the head because she’s better at painting. She did an awesome job. I think you’ll agree, thanks Tash!

The painting was quicker than I thought. It probably took about five hours from start to finish including waiting for the paint to dry. Once the paint was done the evil panda costume was almost ready but there was one thing left to do, make the helmet wearable. At the moment it lolled around like a bobble head and there were no eye holes. First thing I did was cut the eye holes where Tash and I had agreed she should paint the blacks of the eyes. This didn’t give much visibility but it was enough (just). Then I made some holes in the helmet to put a length of elastic through to hold the helmet still. It took a few tries before I got it right but in the end the place that worked was around about where my ears were with the elastic running under my chin. Finally I put the whole shebang on. Order was: Legs first with elastic over the shoulders then lower body over the head upper body on. Get a kind friend with long arms (thanks Raj!) to fasten the side up and then fasten the lower body to the upper. Almost done! Finally the arms go on.

Congratulations you now have an evil robot panda costume! 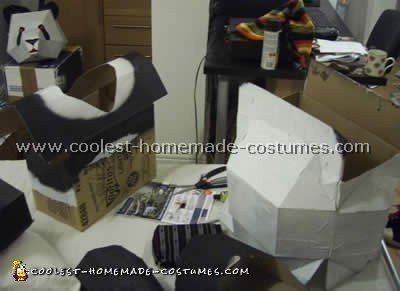 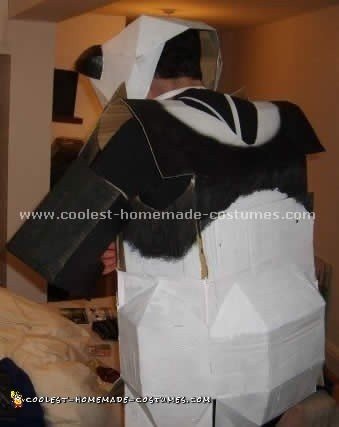