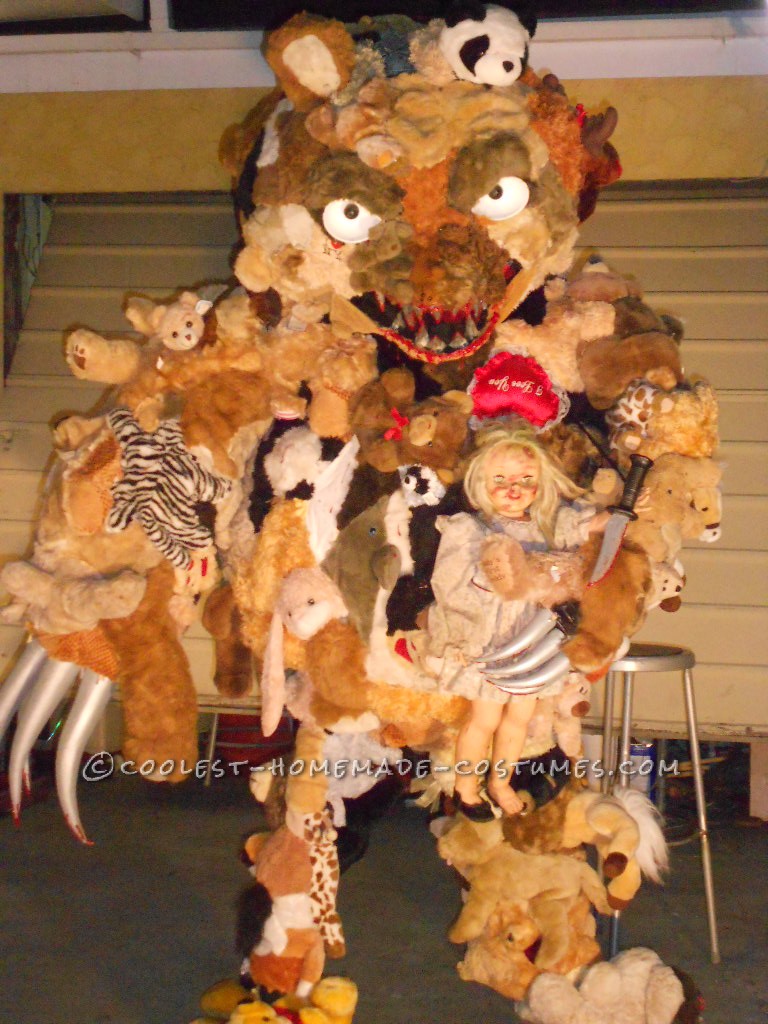 I design and construct local mazes for a public park and during one of my late evening sketches I came up with Mr Teddy. A demonic teddy bear, a creation from a demented toy maker. He was going to be the final attraction. In the maze and the toy maker was going to sick his evil creation on those who have entered his toy shop coming to life out of an over sized arcade crane game and charge the intruders with chomping snarling mouth, a swinging claw and fallowing eyes glowing red. The Maze was canceled do to a series of unfortunate events with money at the park. So Mr Teddy’s been quietly napping waiting for his chance to shine.

How he was made

First it started with steal ladder wire (used for stent hinting concrete)  which was welded together to form a hollow cage. The the same steel ladder was used to make a ring to go in his pants to give a place for the top and bottom to connect. Then it was warped in chicken wire and then in thin foam from the inner top layer of a old mattress, a functional mouth was created with the hard wire, and to that frame work a series of steel teeth were added. The eyes were made from large plastic soft balls with black plastic base for pupils. It gives the illusion of him watching you.

The LEDs where added to give light to his eyes, white for good and then red for possessed mode. And a few computer fans added inside to ventilate and give the person inside fresh air. All of it is powered buy a DeWalt 18v battery. The large arm is made from a piece of 12″ duct with a 2 gallon bucket attached to the bottom with pieces of wood to support hard foam claws which were covered in plaster then in silver spray paint. The teeth and claws got red hot glue put on them to give the illusion of blood. The pants were made out of sweat pants, one leg had 2 pieces, an inner and outer layer to insert mattress fluff into to swell it up.

Then it took 5 close friends and family to help hand stitch every stuffed animal to all sides of costume. And ever two lager animals for shoes. And a rather large baby doll used in a previous maze to give it a little at home feeling. To the mouth and doll I attached black cat toy sticks so I can control every thing from inside. Most of the materials I had from past projects. The costume cost less than $75. The stuffed animals were donated buy a local mother who had a large collection, about 500 hours were put into making this monster come to life.

I only showed him to the public once at a Halloween pet charity party. The total number of people that have seen him is less than 50. But the reactions where very different some froze in Ahhh, as he came around the corner, some ran in for pictures and others just stopped and fled the scene. He had hundreds of photos snapped and even a video posed on YouTube of him laying down his best moves during the dance. I was asked, mostly “where did I buy him? how much did he cost? What movie is he from, never have I heard of it? what costume contest was he from?” and Teddy had to tell them he wasn’t bought but created. I was strongly recommended to put him in a contest to see what other people think. So here I am, what a perfect fit for him. 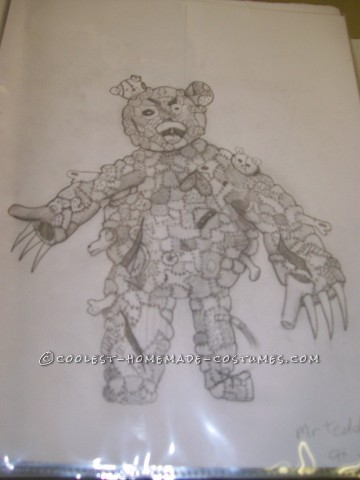 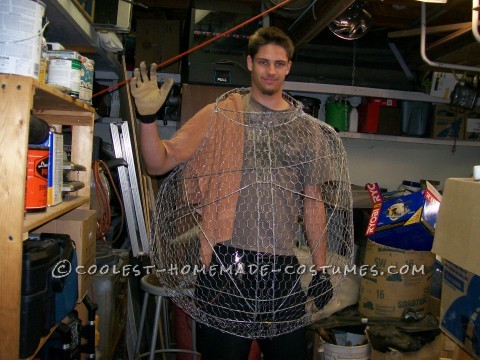 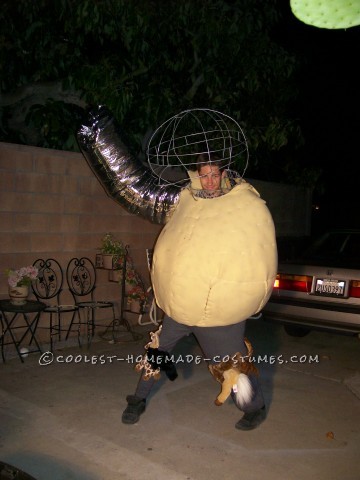 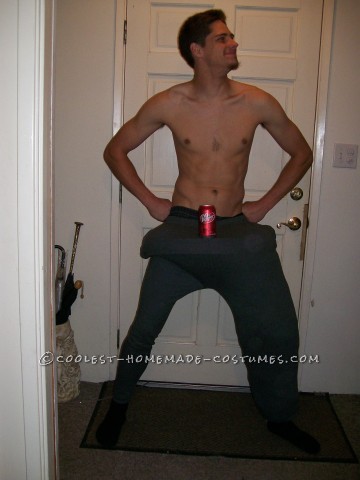 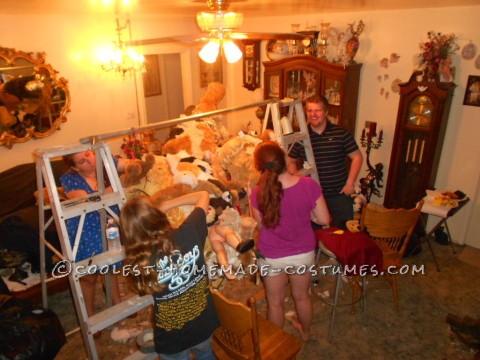 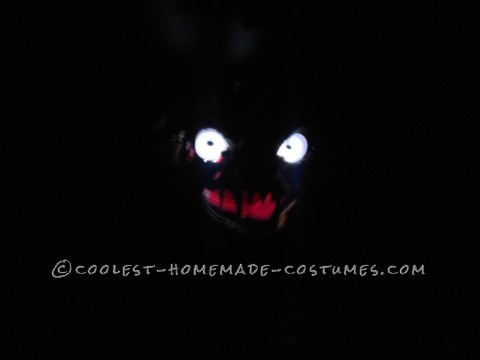 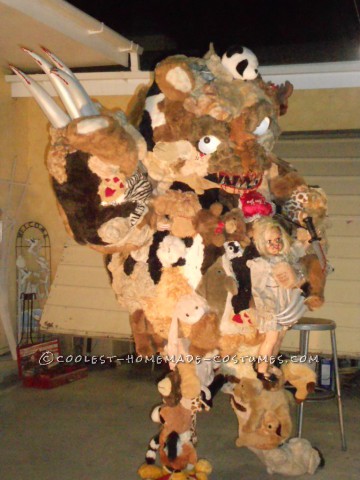 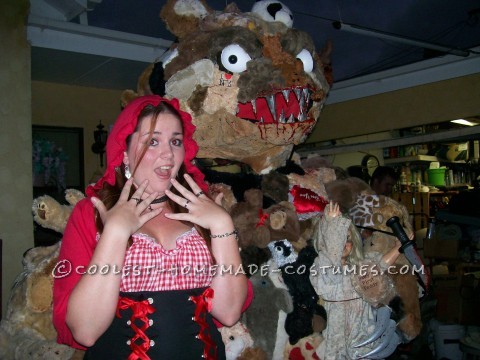 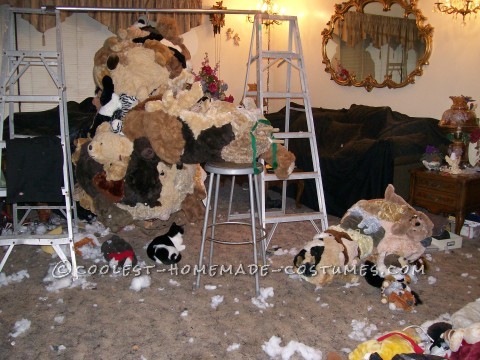