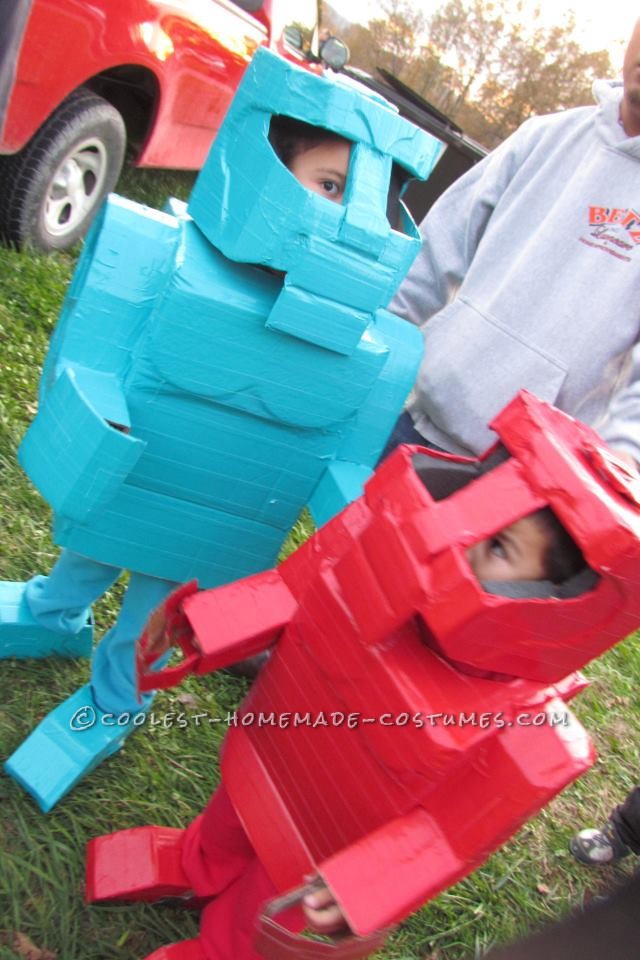 Every year since our second son was born we have pretty much tried to make matching costumes for both boys and after they were Run DMC and getting great feedback from that the year before we couldn’t think of exactly what they were going to be until a week before Halloween this year. Came to me after putting back some board games into the cabinet when I spotted a Rock ‘Em Sock ‘Em Robot standing up ready to fight and thought to myself how brilliant it would be to pull off making these characters into costumes.

So I started off with the heads for the costumes making them out of 2 boxes, bending and cutting them to resemble the actual game pieces. Then with the left over cardboard I cut the individual add-ons such as the noses and bolts on top of the heads. After getting each piece cut out and looking the way I wanted them to I began to use the colored duct tape and covering and assembling them onto the already made helmet. After I added thick foam to inside of each helmet so it would fit the boys tightly and comfortably, even though they still complained about it being heavy the entire time they wore them but they did, however, stayed warm on trick or treating night.  When making the bodies I also used 2 boxes and taped the pex that I had cut out of foam then covered with duct tape again. We were lucky enough to find exact color sweat pants and just made shoe covers out of shoe boxes that were cut and taped into shape and the arms, which were by far the hardest part of the entire costumes were also made from pieces of cardboard that were cut and bent into shape, duct taping and adding the same thick foam that were in the helmets to arms to make them semi-comfortable.

It was a very pleasing feeling once the costumes were finished but I wouldn’t have ever guessed how much of an impact they would be in the community where we live. Since it’s a pretty small spread out country town each year they have a huge community wide trick-or-treat night where all local businesses gather at one location and give out candy, which is a lot more convenient and safer for everyone here. People complimented them the ENTIRE night, even overheard people talking amongst themselves about how great the costumes were and some even ask to get their pictures taken with the boys. No doubt they were recognized and everyone knew exactly who they were dressed up as. It was so overwhelming and exciting to see the reaction that the boys got that night. No doubt it I’ll be very tough to beat.