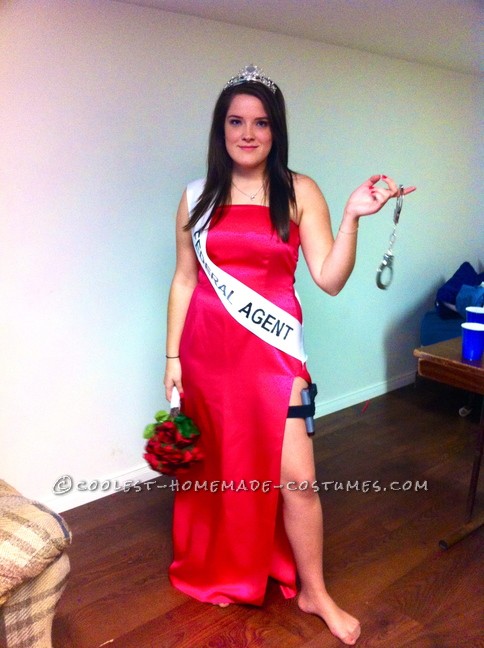 This Miss Congeniality costume is by far the best costume I’ve ever made. It came out of no where, and I never thought I’d actually go for it, but I did. It takes some skill to sew a dress but I tried to remember what I could from a few years ago. I found a pattern similar enough to Sandra Bullock’s dress on the cover of “Miss Congeniality” but still had to do some tweaking. I think in this day and age, there aren’t many dresses with slits down the side and I had to completely wing that portion of the dress. It was definitely the hardest part considering if I messed it up it was done for, although it was the most fun part to do.

I think I got a little too over confident because I did sew the zipper on backwards, so needed help zipping it up every time. I also happened to break a needle on my sewing machine so that set me back a little bit. The worst part about this dress was the fact that I didn’t do closed stitching so I had pink sting fraying all over my shoes and my house all night. However, in the end it turned out fantastic and I received so many compliments and shocked faces when I said I made it. Some friends even went around bragging that I had sewn it myself.

The pattern I used was Burda 8200. This was a fairly easy pattern with a little bit of difficulty with the darts and pleats. For the sash I bought very wide ribbon and typed out “Federal Agent” so I had a guide and used permanent marker. I bought a few stems of roses from the dollar store and bundled them together to make the bouquet, taped it together and put some ribbon around it. It took me about three nights to make, so there wasn’t too much work involved.

Overall, it’s my favorite costume to this day and I wish I could wear it over and over again!