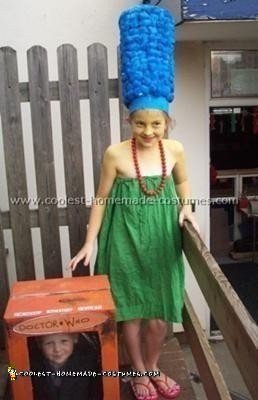 My children came home from school and announced they wanted to enter the fancy dress competition at the summer fare the next morning! I was at a complete loss! Until I found this site! I quickly came up with three ideas stolen, as you will see directly from other people!

As we had no time to go shopping we created these without spending a penny from things in the house! An old beach ball became a hot air balloon! Cotton wool and some cardboard became Marge Simpson’s hair. And an old box helped turn my son into a Doctor Who action figure!

The whole lot only took a couple of hours, the children were so pleased with their costumes and we won first, second and third prizes!

Thanks ever so much to those whose ideas we borrowed and those who run this site! I’m sure we’ll be back again and again!