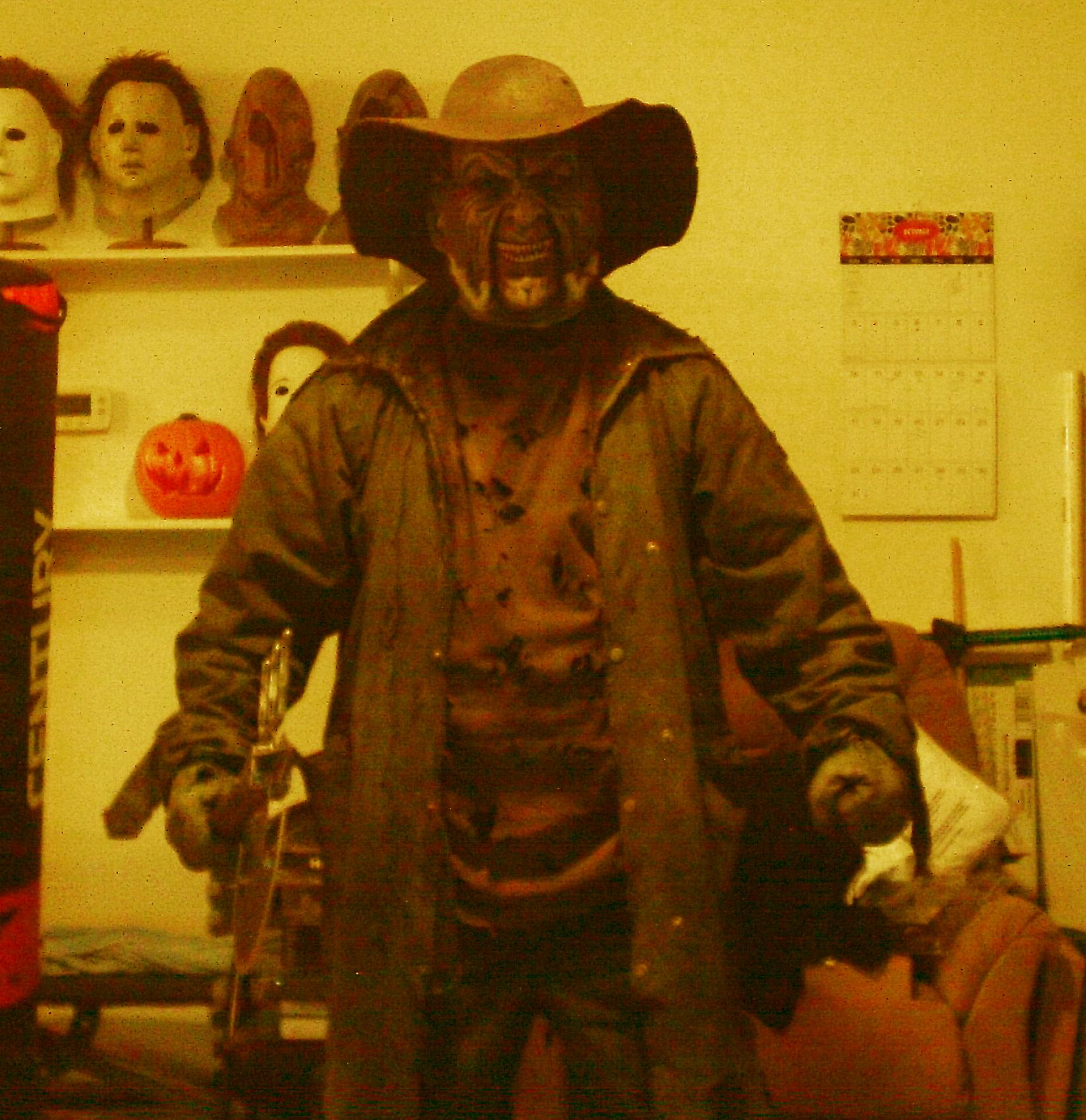 I always wanted to have a Jeepers Creepers costume, and a life-sized display for the house. I never could find any for sale and never seen any good ones made, so I decided to make it happen myself. I bought an official mask and real felt hat for it, then bought a brand new western duster and some black leather gloves. I also used a pair of black boots. I began making the under shirt which was brown, and cutting it up with various tools, knives, scissors, wire brushes etc. I tried to replicate the movie as much as possible. After that I did the same thing to the duster. I then began weathering the shirt with dark blacks and browns, as well as some deep reds for blood etc. I also did a ton of fraying, tattering, sanding, and added several layers of paints for all the dirt and grime.

I then used some khaki beige paints to simulate dirty mud and lighten up the duster and black pants, as well as on the boots. I did the same on the hat and added bullet holes through the front and back of the hat. I bought two 6 foot boards from Lowe’s to make a scarecrow cross, as well as some screws and twine, to simulate the opening scene in Jeepers Creepers 2. I also bought a black scarecrow with glowing red eyes to place on the Creeper to make it look even more scary.

I also made a pair of hands out of a cheap pair of demon hands that were white, I painted them dark gray with black highlights in shadowy areas. I then painted the nails black, and used some gloss to give the hands a wet look. Or I just used weathered leather gloves. I also added white crepe hair to the back and on the talons on the face to give him a beard.

I then made some eye inserts by gluing some half doll type eyes to some pieces of cardboard, and then taped them inside. I also made latex ones as well This Jeepers Creepers Costume was a lot of work but well worth it in the end! I plan on doing another even more realistic version with huge wings and feet soon! You can see tons more pics on my Facebook page and tons of videos on my YouTube channel. (SirBrad FX)

My name is Brad from Sirbrad FX, and I design costumes and movie quality life-sized figures of horror icons. Here’s my Youtube channel. I specialize in Jason Voorhees, Michael Myers, Freddy Krueger, Madman Marz, Jeepers Creepers, Terminator, Leatherface, and many more! I have been featured on DVDS and the official F13th website several times now. I grew up on horror movies and I started making Jason and Myers costumes in the early 80’s as a kid, and now today I design costumes for people worldwide! I have done more Jasons than any other costume so far, as he was always my favorite overall. I have been designing costumes for about 41 years now.