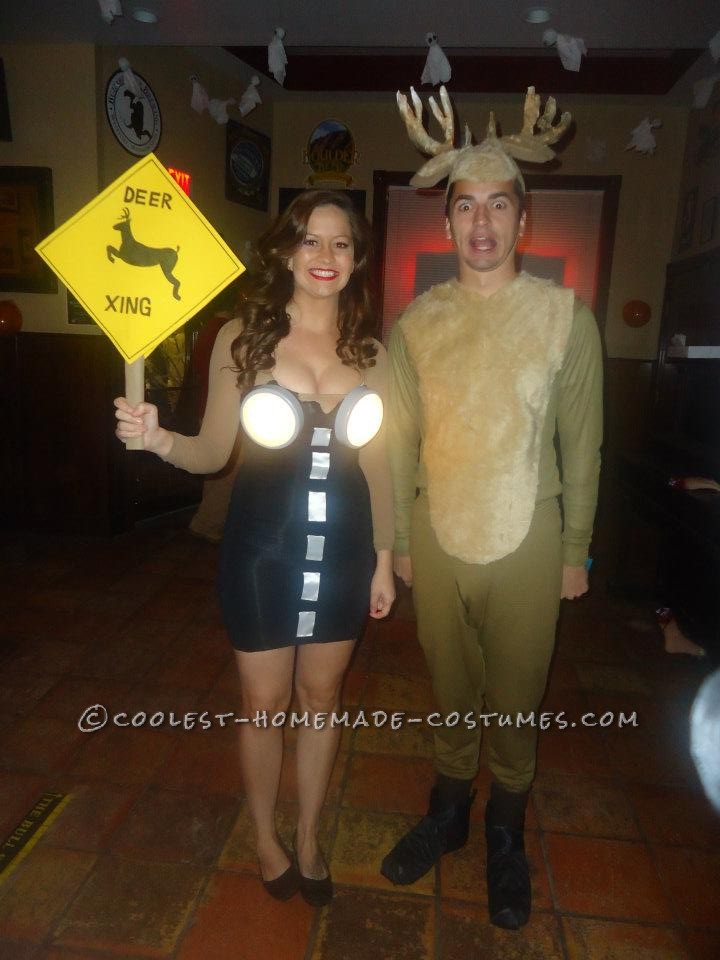 I am Jamie and my boyfriend Craig agreed to do a couples costume with me this year for Halloween. He agreed under the conditions I would not dress him in any costume where he would be considered cute  (3 years ago our good friends Sarah and Danny went as Raggedy Anne and Andy, we still call him Raggedy Dan). When I told him he would be a deer, he was not on board. When he realized with this costume he had permission to bluntly stare at my chest with out being scolded, it was a done deal. This costume fit with our personalities so well. Craig’s show of affection towards me usually consists of dancing on the line of what is appropriate PDA while in company of close friends. I always have loved his playful nature, this costume was just a natural fit!

The antlers were sculpted out of plastic bottles and duck tape then paper mached and painted. The base of the hat was made out of a thick foam sheet and covered with brown fabric and fur. I glued a head band to the hat for security, and caught Craig wearing the antler hat around when he thought no one was looking! Craig wore light brown long johns with fur fabric on his chest and a fur and fabric tail, black shoes with black fabric coverings for hoofs, and a paper mache antler hat. He was a horrible model when I asked him to wear the long johns so I could measure and attach the fur area and would not stand still long enough. I attached the fur too low and to the pants that he was not able to take the pants off, whoops. We fixed that quickly, and added a tail made out of extra brown fabric from his hat and left over fur. He felt this completed the costume and hopped around the house to demonstrate how the tail flops as he prances, haha!

The road dress was an old yoga pant leg cut short with white ribbon strips attached for the road markings. The sign was yellow foam drawn on with black sharpie with brown foam rolled into a handle. For the headlights, I used tap lights attached to a second strip of the yoga pant leg. They were attached at the top and bottom of the lights leaving access to change the batteries if needed.

We had so much fun in this costume, everyone thought it was hysterical. It was funny enough we got Craig to dress up as a deer, and when we were seen together the joke came out loud and clear. I made many new male friends when I was not close by Craig in the deer costume, considering I had a chest that lit up, at least I can say the idea of the costume worked! I also had problems with accidentally tapping one of my lights off in a crowded area. Eventually I also became a game of padiddle, two costumes in one!