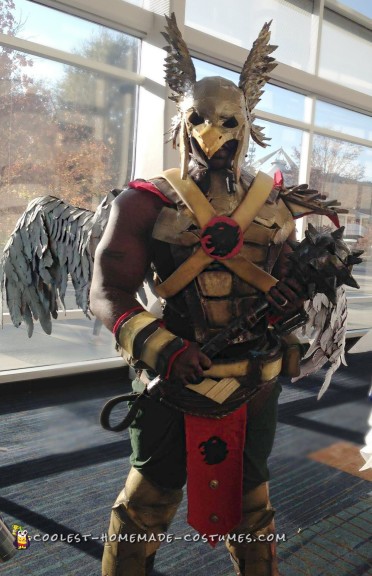 This Hawkman costume was one of the most fun, yet challenging costumes I have ever done. I had an image in my head of what I wanted it to look like; especially the wings. They had to be proportionate to my body yet light weight enough to be worn for a long time.

So, the frame is made of PVC piping with a cardboard overlay that the feathers are the glued to.

Going into this project, I had no idea that birds had right wing and left wing feathers. I KNOW NOW!

After cutting out, detailing, painting and attaching each individual feather ( so that no two was just alike) not only was I sick to death if feathers and craft foam, but I think my hand was stuck in the shape of holding scissors for days. I would often stop for days in end with the wing frame sitting in a corner looking like a plucked bird mocking me.

Finally, the wings were all done and I could move on to crafting the helmet and armor. Guess what, I had totally forgotten the helmet also had feathering, so just when I thought I would never cut another feather, I was right back in my chair, posted in front of the TV, mindlessly cutting…. feathers…. again.

The chest armor is all cardboard, covered with craft foam then plastidipped. Also, the arm guard on my left wrist was designed to house my cell phone. This was blue tooth connected to a speaker mounted in the belt of the costume so that it sat on the back directly beneath the wings. With the touch of one button from an app I downloaded of Real live Hawk Calls. So, the piercing screech of a vocalizing hawk comes wailing from behind me.

That was definitely the coup de gras of this costume as it was totally unexpected. When people would remark how cool it was that I made a place to keep my phone handy, I would thank them. And as I turned to leave or as they passed me….HAWK CALL!!!

The look of shock on many faces was awesome.

The reaction from most people was really positive. I felt like a mini celeb with all the camera flashes and the people stopping me to ask for a photo.

But, nothing, NOTHING is greater than the expressiom on a child’s face when you have successfully brought a Justice league member to life! 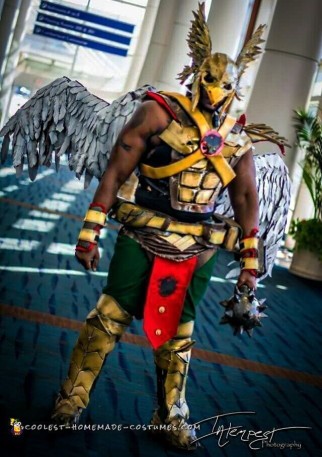 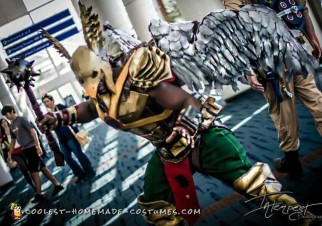 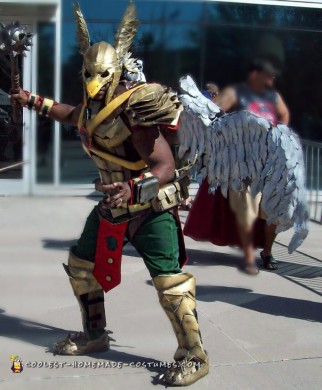 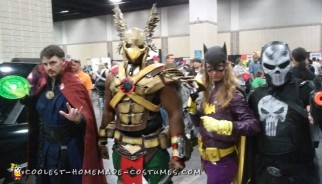