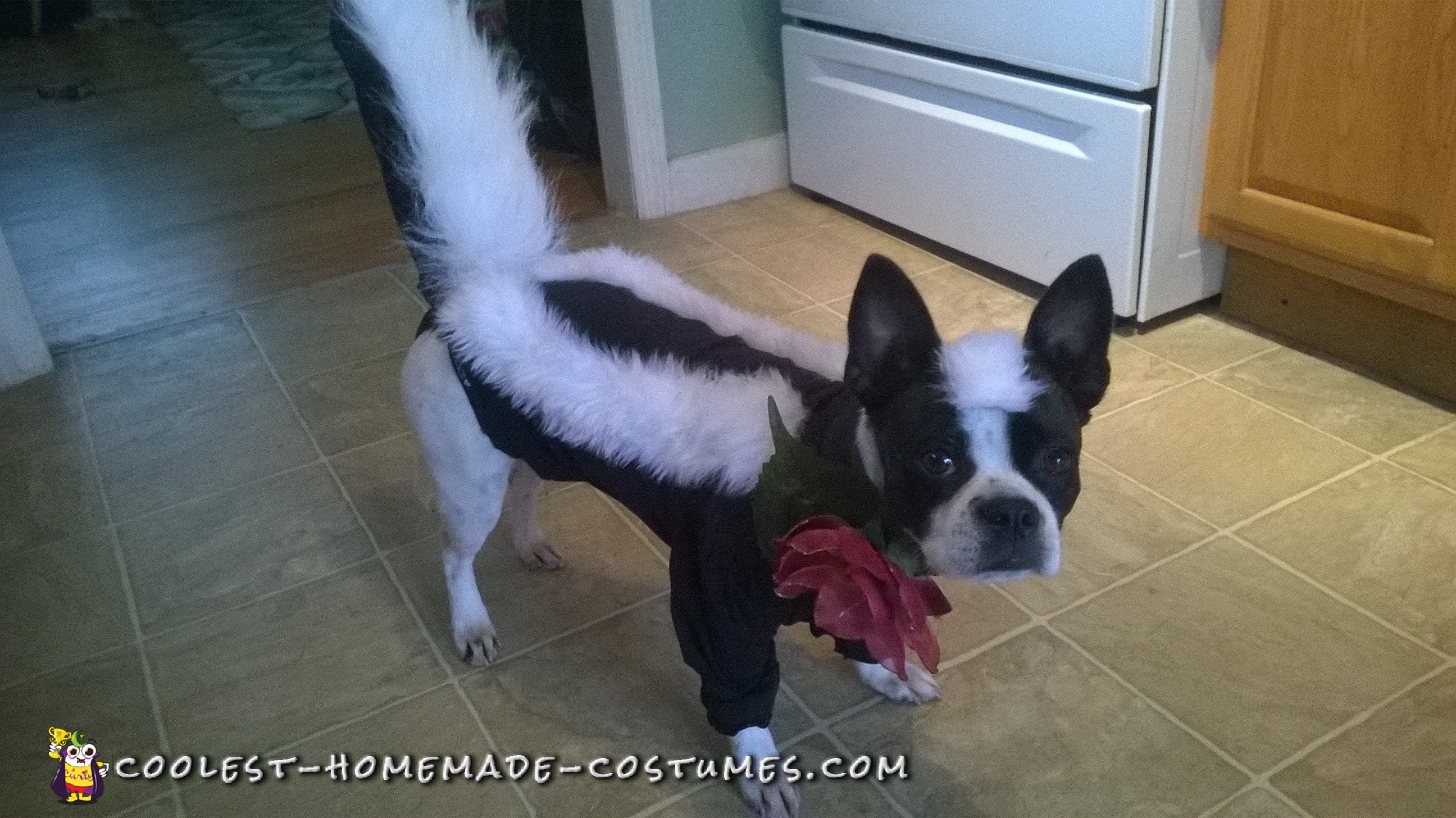 Alright, let’s start this off. I LOVE to make Halloween doggie costumes. I think of an idea, and then hop to it and spend weeks searching for the right items to make it. Used and cheaper, the better. I love to upcycle! I get such a thrill to find the items to piece it together. It’s like a scavenger hunt that I keep up with until I find all my items.

This year, I knew what I wanted to be first. A Deer…a female deer! I was thinking of what could go with me. (I like to have costumes that work together) A skunk! She’s Flower from Bambi, and I’m Bambi’s girlfriend; Faline! Cassi is a Boston terrier mix, so her coloring works perfectly for her!

First, I searched on the internet for accurate pictures of what my costumes resemble. All those pre-made skunk costumes at the stores have ONE stripe. Skunks, most of them, have TWO stripes. Got to be correct here! :-)

I searched the resale shops for the base of my costume. A baby onesie. Found a solid back, long sleeve one. Perfect! Hoped my size guessing would be alright. It was! I then got the fuzzy white faux fur from Hobby Lobby. Came in a long strip. Just what I needed! I cut off just enough to save for her head. Then cut it in half and machine sewed it to the shirt. Much harder than I thought! It’s so thick! And it kept crinkling up on the shirt when I tried it on her. So, lots of little adjustments and trying on. She was such a good sport! I had to adjust the sleeves to make shorter so she wouldn’t trip on them. I also had to sew up the waist part so it would fit more snugly.

For the tail. I originally thought I could find a stuffed animal and use the tail. But finding a stuffed skunk is definitely not as prevalent as finding a teddy bear in resale shops! So, I did buy a pre-made dog skunk costume from a store… I know, I know, but I altered it so much that it’s my own creation. Phew, I feel better.

I bought the largest size, XXL. Cut a tail shape right out of the middle. It was two layers thick so I was able to sew it and stuff it with batting. I used the Velcro waist strap from it and cut it off, and then put it inside the tail for support. Then, I thought… how is it going to stand up? We (hubby and I) took a wire coat hanger from the closet, untwisted it and shaped it to the tail. We put it inside and then put the straight parts that stuck out of the bottom right into the white fuzzy stripes. I hand sewed the tail to the body part. This was/is the hardest part of the costume. To keep the tail up and to not have it poke out of the white stripes on top. With lots of adjustments and pulling and shaping of the wire, I do think it turned out pretty good.

I wanted to adorn her with a fake flower. I wore a headpiece made of fake flowers, so we had to match! And that’s where she fits “Flower” from Bambi even better! I got the flower and two leaves from a resale shop. Big purchase of .32 cents! I saved wrapping paper, bows, ribbons etc. I remembered I had a thick black ribbon that must have been used in the packaging of a blanket. I hot glued the flower and leaves to the ribbon and shortened it and sewed with the sewing machine. It already had Velcro on it to fasten around her neck.

Last is the little piece of faux fur for her head. I had to think of a safe, not too sticky way to attach it to her head. Just the tiniest amount of duct tape did the trick! I was so worried it would bother her or fall off. After a couple dog shakes, she didn’t seem to be bothered by any of it! And, best part, it stayed on! And the time I’m referring to is a Halloween Dog costume contest I went to last Sunday. There were over 400 dogs! Wow! Costume stayed intact the whole time! I was so overwhelmed by the compliments!! For both myself and Cassi! I felt like a celebrity! People taking pictures, kids and adults gushing over my little skunk!

The contest had 4 main categories and more were to be added at the event. Glamor, Scariest, Funny and Pop Culture were the original 4. We went in the Pop Culture. We got announced and walked in front of everyone and the judges. The announcer told our little story and asked, while on the microphone: “Did you make this?” I turned to her and said: “I most certainly did!” We got a huge round of applause from the audience! It felt great!

When it came time for the judging…we didn’t win in our category. Darn! Oh well, maybe we will get something that the judges added. Owned & Pet look alike. I thought, well, maybe. Nope, didn’t get it. Then I hear: “Handmade” I smiled and crossed my fingers. “Honorable Mention (2nd) goes to Cassi the skunk!” Yay!! I got a handmade prize ribbon that I held and punched up to the sky! I was SO excited!!! It was all worth it! As I’m writing this, we have 3 more local contests that we are going to. Hope luck is still on our side! 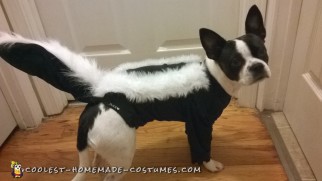 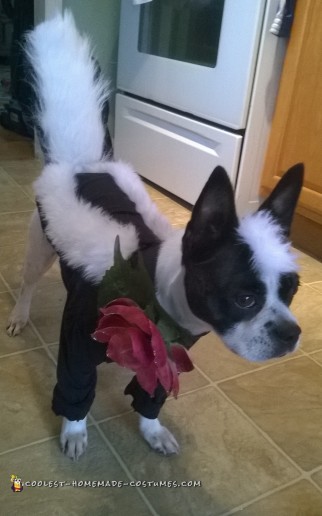 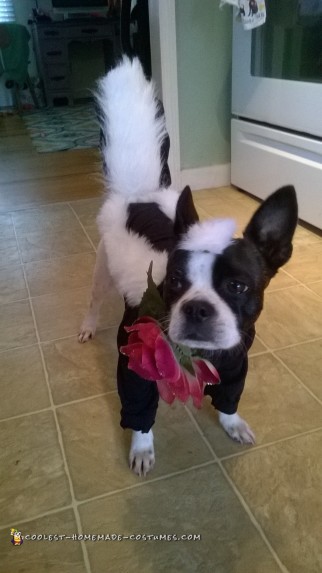 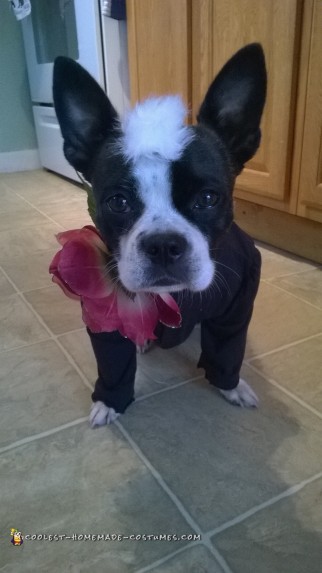 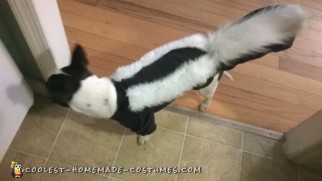