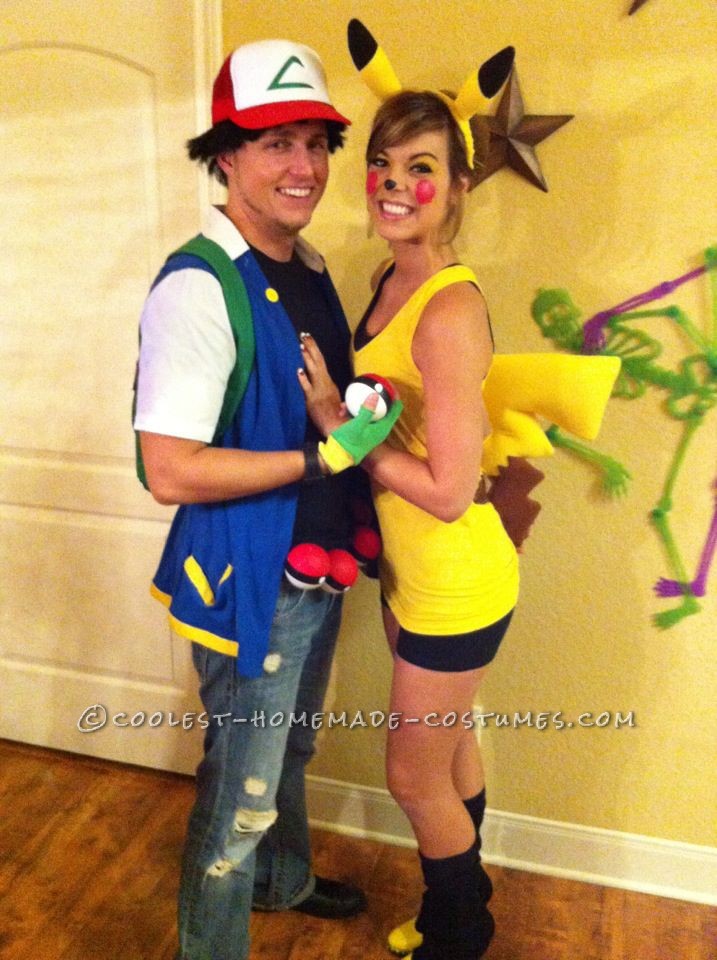 Well, this costume Pikachu and Ash couple Halloween costume took about a total of two weeks to make. First, I started off at our local thrift store and found a blue vest ($2.00) and a white button up shirt ($3.00). I tried to find anything thing I could for my portion of the costume (Pikachu), but there was no such luck. So, I went to a local store and found a yellow tank top. Figuring this costume was already going to be hard enough to pull off, I happened to find the Pikachu ear and tail set at Hot Topic.

I also ordered Ash’s hat and glove set off of Ebay because it was impossible to find green gloves and a red and white trucker hat. I went to Hobby Lobby and found some solid (not the crackly-ish kind) styrofoam balls, black electrical tape, red acrylic paint, a white paint pen, and some solid back safety pins for the pokeballs. While at Hobby Lobby I also got the brown fabric for Pikachu’s brown back stripes; and green, red, and yellow fabric to make a backpack for Ash and to line his vest. We also found black leg warmers for Pikachu, and black shoes for Ash at PayLess.

After a long and exhausting online search for yellow heels, it became obvious I was going to have to take matters in to my own hands. I took an old pair of black heels and painted about twelve coats of yellow acrylic paint on them to make them yellow. Now, to start on the costumes. I cut the sleeves and the collar off of the white shirt and sewed them on to the blue vest. Then, I lined to pockets and bottom of the vest with the yellow fabric, and added a yellow button at the top. Now, this was WAY harder than I had estimated it would be and after about an hour of sewing and finishing the vest I had my husband try it on only to realize that I had stretched the fabric while sewing and completely stretched out the bottom so it made a nice triangle shape in the back. UG.

So then, I had to take it in on the sides as well. Next, I cut strips of the brown fabric and sewed them on to the back of my yellow tank. The backpack was the hardest part of all. I had absolutely no pattern for this, I simply had to free hand it. So, I cut the shape of what I thought would be like a back pack and sewed it. Then added a long yellow rectangle and small red square, just like Ash’s. The straps were a whole ‘nother ballpark. I had to redo them AT LEAST four times. A lot of curse words and three glasses of wine later, I finished the backpack and was DANG proud of it!

On to the pokeballs. I painted half of them red and left the other half white. Put the black electrical tape around the middle and painted a white dot in the middle of the black. Then hot glued the pin on the pokeball to strap to Ash’s belt. The costumes were complete (FINALLY). All there was to do was to put the costumes on, add Pikachus face makeup, and VIOLA!  Ash and Pikachu were ready to parrttaayyy! To add a fun touch to the party we were going to we got a small pack of pokemon cards and in black sharpie wrote things like: “Go now and take a shot with Pikachu” “Find the person with the most balls, and take a shot with him” “Find someone you don’t know, and take a shot with them”. People loved them so much we passed out the deck three times! GOTTA CATCH ‘EM ALL! 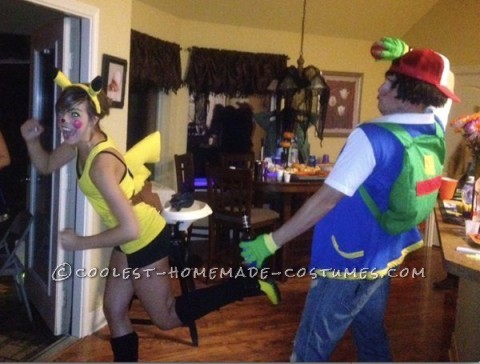