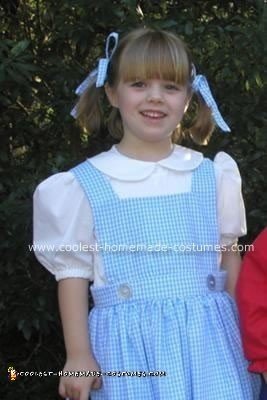 After watching the Wizard of Oz more times than I care to recall, my daughter announced she wanted to be Dorothy for Halloween. Since I’m able to sew a bit, I decided against purchasing a poorly constructed pre-made non-washable costume in favor of making a dress that could actually be worn again!

The pattern was Butterick 4600. I purchased all cotton and cotton/poly fabric from a national fabric retailer, red sparkly shoes from WallyWorld and blue socks from another big retailer.

The dress is two parts: sort of like an apron or pinafore on top (blue and white) which had it’s own sash and tied in the back; and a white petticoat dress beneath with the hemline trimmed in white eyelet. The back closure called for Velcro, but with some help, I was able to install a zipper instead to give it less of a costume look. I sewed the blue and white “ribbons” from fabric for her hair.

My daughter was not at all interested in being responsible for toting a basket with a stuffed dog inside, but was very happy to carry a “treat” bag for collecting goodies!

She has since worn the dress numerous times to school and church! It would be easy to pick some other cute fabric for the apron to change it out!