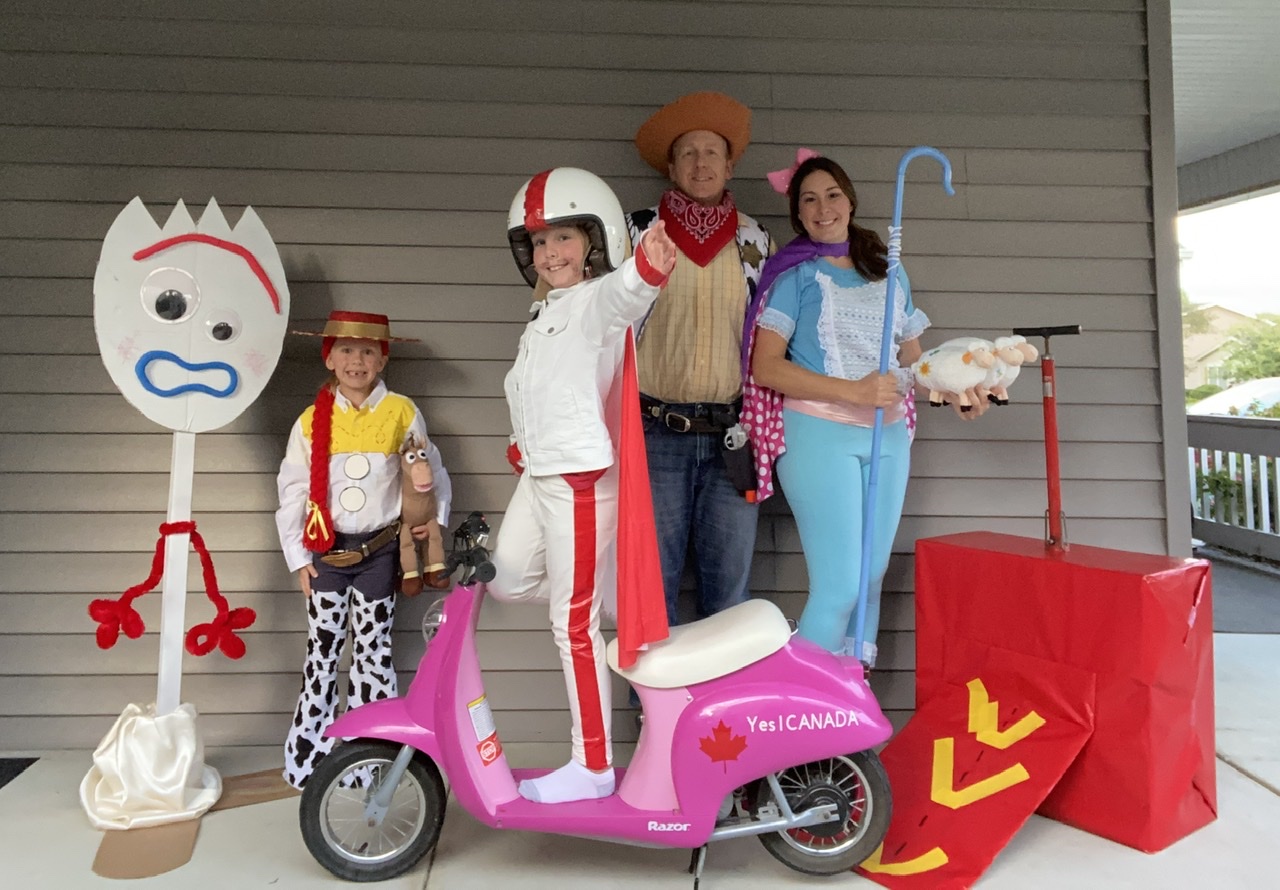 Our Toy Story costume was a challenge with the time crunch I was given by the creators (my little ones). Luckily we have plenty of craft/sewing/paint scraps from various projects.

My girls were bumming about Halloween being cancelled for 2020 where we live, coupled with eLearning daily challenges that have dragged their holiday spirit down. I wanted to make a fun project to lift their spirits, have some fun together, and still get to dress up. The best part was watching them create the larger than life Forky. It was just as Bonnie did in the movie. He is currently the eLearning mascot in their designated “classroom”.

Each child was allowed to pick ANY character of their choice from the movie. It was one of those things where it just worked out for our family of four. Anyone with bigger families can obviously still make it work.

Jessie’s shirt was handprinted front and back with fabric paint. The red stitching was puffy paint, the large buttons are foam sheets with black puffy paint around the border. The cow belt buckle was also from a foam sheet and painted.

Duke Caboom was white leggings and a white fall coat with red duct tape. The helmet was borrowed from a friend and added duct tape to the middle. Cape was amazon due to time crunch. The Caboom blast off box was wrapping paper from the dollar store around my sister’s moving boxes as well as the cardboard ramp. The yellow markings on the ramp is also duct tape. The blast off handle is an old tire pump.

Bo peep was yoga pants with glued-on lace scraps. The T-shirt was from Michales (on sale). Her shirt lace came from a thrift store (they were using it to display tea cups). I was told not for sale but explained I would really like to work something out since it fit my torso perfect. Grand total of $1.25 for it. The cape was a kid’s cape with polka dot fabric I glued to it.

Forky was all cardboard and modeling clay. The base is an upside down beach pail. I cut out the bottom and used silk fabric to hide the pail and act as the play doh used to stick his body on the feet. His hands were a 6ft piece of thick fuzzy pipe cleaner I found at Michaels.

Woody was a shirt I found at Goodwill. The vest I actually ended up buying after many failed attempts with what we had on hand. I also bought Jessie’s hat as I couldn’t for the life of me find one that looked like hers. If given more time I’m sure I would have figured something out to work.