My husband wanted to do a costume that was unique from everything else out there! We like to play tennis so we got the idea to cut a tennis ball in half and make it look like it was lodged into his head! All we had to do was get a tennis ball, used a cutting saw, the kind that you use to cut up hard wood floors. Cut it in half and then I bought skin glue at a local spirit halloween store, and made some blood out of water and food coloring. It was pretty messing, really would be better if you just bought the fake blood. That lays exactly how you want it too! I made it look like it was bruised by some blue eyeshadow! I put the eyeshadow on first then the blood around it.

For the outfit, he already had everything! All you would need to buy is some gym shorts and a work out shirt. Any sporting goods store would have what you need. The only thing we did buy was the arm and sweat band which we got at Dicks sporting goods. He already had the racket. It was a great hit, and he won the award for most creative Homemade Tennis Accident Costume! Exactly what he was going for! 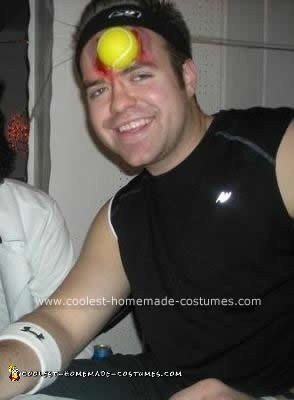