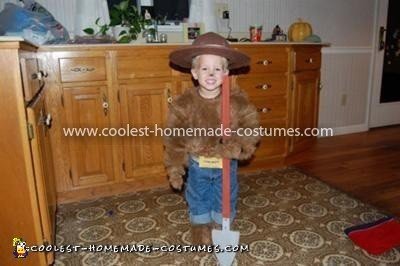 My mother always made us homemade costumes for Halloween. I always liked being something creative instead of a store bought costume, I always thought it was so special. So I am trying to carry out the same tradition with my son. He’s only 2, so it’s been going good so far. His first year he was a squirrel and last year he was an Oompa Loompa.

I really wanted him to be something different again this year, but I was having trouble coming up with anything. My husband thought it should be something our son was interested in which made it even more difficult for my Elmo loving boy.

Then it came to me! My mother in law babysat our 2 year old over the summer and for some reason she kept singing the ‘Smokey the Bear’ song to him. One day I looked up pictures of Smokey to show him and he just loved him! So when I started thinking of what our son, Saul, could be for Halloween, I was so glad when the idea of being Smokey popped in my head.

I thought it seemed so simple and it mostly was, except I couldn’t find a ranger type hat for a 2 year old. I finally realized I was going to have to make him a hat. I bought a Styrofoam ball and carved 4 divots out of the top of it. I wrapped it in plastic wrap and put a ring of cardboard around the base to stabilize it. Then I took my brown felt and dipped it in a mixture of Elmers glue and water and totally saturated the fabric.

Then I stretched and stretched the felt to make it more flexible and finally molded it over the Styrofoam. I tied it with a ribbon and let it dry overnight. For the rim of the hat I used cardboard and simply cut a donut shape to fit my son’s head. Then I tucked the molded part of the hat through the hole. And finally used spray glue to attach felt to the cardboard and cover any imperfections. I added a piece of ribbon with spray glue and the hat was done.

For the body I simply used a sweatshirt of my sons to copy for a pattern. I found working with the fur was very messy, but very forgiving. Things I normally would have been pickier about didn’t matter because the fur just covered it. I made a hood on the body, but my son refused to wear it! And I thought he looked pretty cute without it anyway.

I purposely made the shirt a little long so I could tuck it into his jeans. Which by the way were a size too big so the shirt could tuck into them and so I could roll them up like Smokey! The feet turned out so great! I simply cut out 2 big sock shapes, sewed them together except at the top and the bottom. I did hem the bottom so fur wouldn’t be flying everywhere, but I didn’t worry about the top since they were tucked into his pants.

The belt buckle was simply construction paper with stickers that read Smokey. They were actually green stickers and I just went over them with a black sharpie to make them stand out more.

And finally my husband was so sweet to make the shovel for him. He works at a wood shop, so it wasn’t too difficult for him. But we really thought it topped the outfit!

This was a great Halloween. Our son really enjoyed being Smokey and what a great message to other children! Remember, Only YOU can prevent Forest Fires!!! 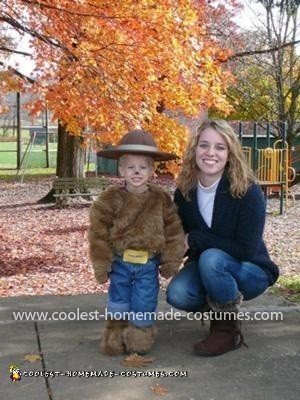