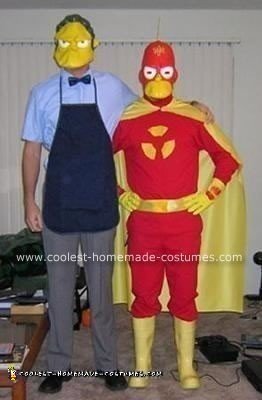 Who doesn’t like The Simpsons! Well anyone can go to a Halloween store and buy a Simpsons costume to wear. Not me though. I have to take it one step further. So this time, I went with my buddy to a store and bought only the masks for Radioactive Man, and Moe Syzlak. The cheesy rest of the costume just didn’t cut it, so here began the next stage.

I pulled up pictures of what Radioactive Man looked like on the cartoon, and went to work. I bought red sweatpants and a long sleeve T-shirt for starters. I grabbed some yellow rain boots (from work), some yellow dish washing gloves, and took a trip to the fabric store. I cutout using cardboard and fabric, the logo for the chest, and also made a yellow cape. There was the same Radioactive logo on the cape itself, but it was a bigger version. I made a belt from fabric and cardboard, and attached it. Lastly was painting the logo again on the yellow gloves, and I was good to go!