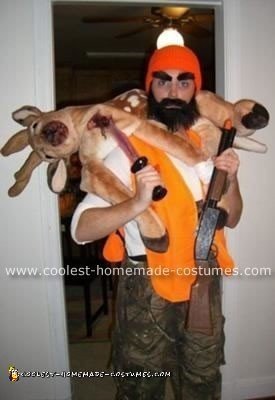 My costume is a rugged hunter who has triumphantly shot and killed a deer. My idea just popped into my head one day and I started assembling the pieces.

I went on eBay and bought a stuffed animal deer (with antlers – a buck) that was almost life-size. Then I took out a lot of the stuffing (especially around the neck) so it would look limp and not as stiff. I sewed it back up and put fake blood over specific areas of the deer where it was “shot,” including its mouth as if it were trying to lick its wounds before it died.

Then I went to Wal-mart and bought some camouflage overalls from the hunting section. My dad had extra hunting gear that he would wear when he went hunting, which consisted of an orange hat and orange vest which I wore also. I found my brother’s old toy rifle gun he had when he was little and used that as a prop along with a fake bloody knife that I bought at the costume store.

Lastly, I am naturally blonde with soft features, so I also bought a brownish/black beard, mustache and eyebrows from the costume store (I think the beard was marketed as being part of an Amish man costume). Another little touch included using some brown eyeliner to smudge around my eyes to make them look more hollow, older and manly.

I took the “bloody” deer and put it around my shoulders and then duct tapped the four legs together in front of my neck so I could carry it on my shoulders without having to carry it. I put on the rest of the accessories along with orange reflecting Nike sneakers to complete my costume.