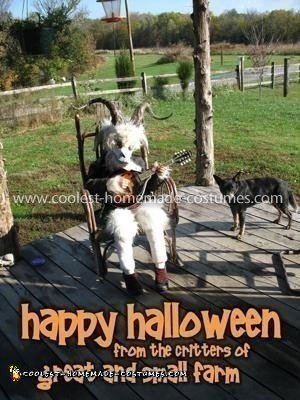 This Rock-A-Billy Goat Costume was a last minute creation that was inspired by stuff we just had kicking around… mainly a old leather jacket and a bag of angora goat hair. Although not intended to be a scary costume, the reaction we got trick or treating was generally …respectful terror.

Obviously the bulk of the crafting went into making the goat head mask. The fur pants are not so awesome, but are made of two lengths of fake fur to help give the “Pan” sort of look to the upper legs.

Now- On to the mask. I started by using a bicycle helmet as the base- this is a great way to manage how to strap the thing on- and how to support things comfortably. I wanted to keep it as light as possible. I used electric fence wire looped through the vents of the helmet and coiled around itself- to make the general tapered spiral of the goat horns. Then strips of cereal box cardboard get taped in place to make the forms of the goat’s muzzle and brows. The whole thing then gets several layers of paper mache and the details like the nostrils and mouth are added. Once that’s dry- I painted it with acrylic paint. Grey as a base coat and white dry brushed over to make it appear furry. I fabricated the ears separately and they got added on with the fake fur so that they were suspended by cloth and dangled freely. Fake fur is very forgiving because the fur hides the seams- so I just hotglued a rough sheet down the midline and carefully cut openings for the horns and slits for shaping, gluing as I went. Once the fake fur was on, I hot glued a few more locks of real goat hair (being careful not to comb it or fluff it too much) around the edge of the face and under the chin to make the beard.

Oh…and the secret of the horns… after the paper mache was dry- they were painted a blackish brown with acrylic paint- then I melted a brown crayon with parafin and painted a layer of wax as the final top coat. You may have to play around with wax a while to get the feel for it- but it can make a very dull gravely texture- or polish to a smooth gloss. The combination of both gives these horns their organic feel.