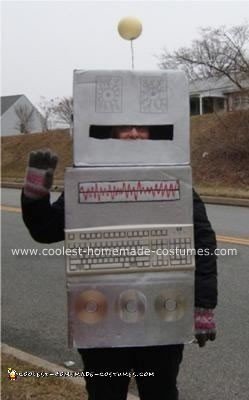 I wanted an original costume instead of the stuff my friends were going as. Anyways they were a little to revealing for me. My one friend kept telling me to be a robot but in a joking way. After a while i started thinking about a Robot Halloween Costume and was really into it. I decided if I was going to be a robot it should be all shiny and fun.

I got a box and spray painted it a shiny metallic and got a smaller box for my head. After I painted the boxes I attached my dodads and then made the antena using an old wire hanger. The little ball on the top glows in the dark. I also used glow in the dark paint for the eyes.

I decided to only tape the back of the smaller box for my head to the back of the torso so I can lift it up without it falling off. I used CD’s on the side to be my ears and I used some bottle caps to make them stick out so they aren’t flat on the costume. I used some bottle caps, CD’s and other little items to decorate the front of it. I also made a heart beat type thing for the front of it.I used a keyboard so it looks a little more computerish.

If you decide to make a costume like mine please send me some pictures of what it looks like! I’d love to see other peoples ideas!