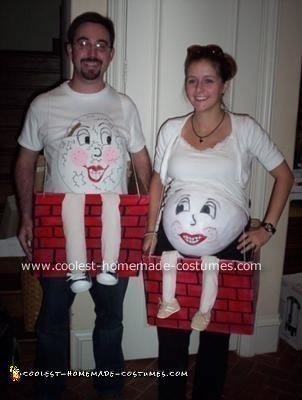 In an effort to use “the belly” to it’s fullest extent, we just couldn’t cover it up!

With our coming arrival, we also wanted to keep with the “kiddo” theme. And so was born Humpty-Dumpty, the before and after. This pregnant woman costume took several days to put together, but it really was easy. We had to paint the boxes like brick walls and cut out all but the four sides. We did reinforce the corners with some extra cardboard to make sure it kept it’s shape. Then we attached a string to the front and back of the boxes and we used that to drape them over our shoulders.

I took some old fabric that I had and sewed four tubes about 15 inches long to use as legs and then stuffed them with hand towels and pinned them inside of the baby shoes that had been given to us for our son. We attached the “legs” to the inside of the boxes so that they looked as they were hanging over the wall.

Next came the “face” painting. I had a friend paint the egg and face onto my belly (with my belly button as the nose.) WE just painted an egg face, complete with cracks and band-aid, on one of my hubby’s t-shirts. We used a plastic bowl under his shirt to give the illusion of a tummy. It took us a while to find the right bowl, and we finally settled on a football shape.

We really had a ball with this. It actually took people several minutes to realize that it was really my tummy that they were seeing, and not a shirt. It made me so proud to be showing off what at times brought me so much unwanted attention. If you try this, expect some laughs! It is really fun. It would work without a partner as well.