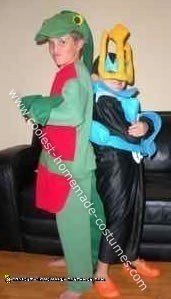 My sons love Pokemon! This year they selected two of their favorite Pokemon characters and I did my best to create costumes that other kids would recognize. This was important as we take these costumes to a Cub Scout Halloween camp out and they are seen by over 500 boys and girls in prime Pokemon fan age.

It was fun to hear parents assume they were a frog or something to do with King Tritan, then be corrected by their parents with the actual Pokemon character name. We even were asked where they could buy the Polemon Grovyle and costume. As long as my kids want to be something different and want something homemade, I will do my best to make their costumes.

For Empoleon, I luckily had my college graduation gown still around. My son put it on backwards and we cut off some excess. Then I cut the center seam front and back and made the bottom into pant legs. This gave us a shell he could step into and I could zip up from behind. I used felt to make the white belly part of the character and sewed it on. Then I cut two pieces of blue felt to the general shape of the ride that goes down the belly, sewed it, turned it right side out and stuffed it, this was hand stitched into place.

Next I used more blue felt for the collar. First I stitched it, then I turned it right side out and top stitched it to make it more stiff. Then I machine stitched it to the graduation gown and hand stitched the two sides together in the front to make the point. More blue felt was sewn together for the wings and attached to the gown sleeves. I gathered up excess fabric in the sleeves and stuffed it into the felt when it was pinned together to make the arm appear more stiff. I made sure to leave an opening at the bottom for his hands to come out.

For the mask I used a standard foam half-face mask. I used dark yellow polar fleece to make the triple horns/spears, turned it right side out and stuffed it with pillow stuffing. Then I cut a piece of the blue felt and glued it to the mask. Next I hand stitched the yellow horns on top of the blue to the mask. This turned out to be too heavy for the elastic on the original mask, so I took a black baseball hat we had at home and hand stitched everything to the back of that. This turned out to be a great way for him to occasionally slide it up to cool off and still be in costume.

For Grovyle I bought a light green fleece sweat suit to use as a shell. I could only find this in the adult section, so I took in the pants at the waist and shortened them. Then I added a red polar fleece belly to the top with both machine and hand stitching. I cut off the bottom of the t-shirt and added the green mid-section to the red belly (almost forgot this step and did it before attaching the red to the sides of the shirt.

For the hands, we cut a hole for the thumb to poke out and stitched down the center of the cuff to make it a three-fingered hand. Grovyle has several leaves coming out of his hands, back and head. I used dark green felt for these. Once two sides for each leaf were cut out, I tacked down a piece of wire from one end down the middle to about the center lengthwise ( the wire had a small loop on each end so it wouldn’t poke through and to sew through to connect them later). Then I top stitched two pieces together to make the leaf. Three leaves were stitched together and attached to a loop of elastic to go around my son’s wrist. I had him put the shirt on and marked where this should be, then cut a small hole to put the elastic into and secured it with a safety pin from the inside.

The longer tail feathers were made without the wire and attached to the shirt through a small slot in the back with a safety pin. This way I could remove them to launder the costume (we were taking it camping, you know!). For the mask, I cut up the t-shirt and draped it over a baseball hat, gluing it down around the front where the brim meets the hat. My son painted a small styrofoam ball I had cut in half yellow and we glued this on draping some of the shirt over it to make the eye socket. We glued some black craft foam to finish the eyes. He could choose to either let the fabric fall down his neck and tuck into the shirt or tuck it in under the hat.

After this picture was taken, we added a stick to the Grovyle costume (he keeps one in his mouth) and used the excess fabric cut from the graduation gown to lengthen and add fringe to the Empoleon costume.

I didn’t get another picture of just my two boys at the camp out and the Pokemon Govyle and Empoleon costume is a little bit worse for wear from the very rustic, very wet campground. This is the best one I have of both together.