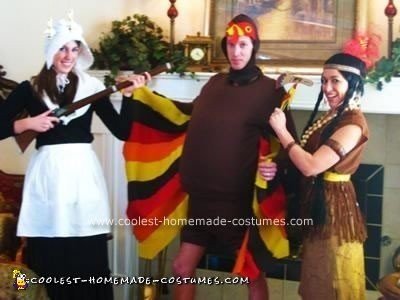 My husband and I wanted to do something funny for Thanksgiving so we (along with my sister-in-law) decided to dress up and surprise everyone by running out of the room right before our family Thanksgiving dinner. The turkey let out a huge scream and started running through the house followed by a Native American and Pilgrim who both wanted him for dinner. It was a HUUUGE hit!!! (( :

My husband and I hand stitched several pieces of red, orange, yellow and brown felt together and stitched the wings to a brown sweat suit Academy. He rolled up the legs of the pants (to give the turkey some texture) and stuffed the top with a couple of pillows.

I used more of the felt fabric to make a turkey hat. I measured his head then cut out pieces for the eyes, beak, waddle, etc. (by eye… I didn’t use a pattern) and stitched them on. We used safety pins under his chin to close the headpiece.

I put the N.A. costume together using stuff I already had on hand. The top is from a hippie costume I have but could easily be made with some fabric, scissors and beads. I wore a bright belt to match the color scheme. The headband is from the hippie costume and I found the feather at a craft store a couple years ago. I braided a long black wig and added a bunch of wooden jewelry that I either had or borrowed from my sis-in-law.

My husband made my tomahawk using the round bottom piece from a wire hanger, cardboard from a box and suede cord. He painted it and added some feathers and beads for effect.

My sis-in-law already had almost everything she needed to make the Pilgrim costume. She bought a long black skirt from Ross, added her own black sweater, apron, and yes… she already had the bonnet and toy shotgun too! She wrapped a white scarf around her shoulders and pinned it in front to complete her costume.

Turkey Dog Costume: Recovering Puppies Can Be Festive Too!