The first step in building this giant Photo Booth Picture Strip costume was to pick the outfit I was going to wear on the night of the parade (paying careful attention to the weather forecast!) a few weeks prior and posing for a bunch of stereotypical “photo booth” pics wearing that outfit.

I created the curtain for behind my head by taking a bright orange fabric and ironing it with starch “accordion style,” in the style of those classic photo booths.

Once I picked the 3 pictures I wanted in my giant picture strip, I had them printed to scale on matte paper (as to not reflect flashes in case people took my picture). I affixed the pictures with white duct tape to two flat aluminum strips that I shaped with a small curl/wave. Leaving the second picture slot open for my “live” picture, I placed the printed pictures on the top, second to last and last position.

I built a harness using 2 “u” shaped plastic handles that rested on my shoulders and made it level so my head fit into the second picture frame slot. I affixed the starched curtain behind my head using dowels and foam core and installed battery operated light strips to the top and bottom of the picture strip, as well as in the sides of my “frame” to illuminate me in the “live” picture.

Making sure I wore the exact same outfit, I was set to go! (Probably should have nixed this, but… I carried around an old style flash hidden from view that I flashed into my face as I posed for pictures throughout the night. I was severely blinded by the end of the evening, but the effect was great!).

The Homemade Photo Booth Picture Strip Costume was fun and interactive because whenever people took my picture, I made a different silly-faced pose every time – that worked both for them and for the overall effect of the picture strip. 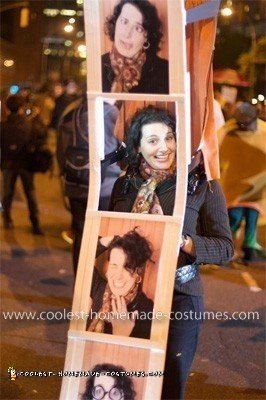 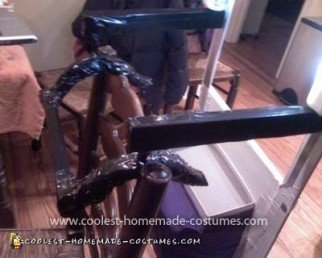