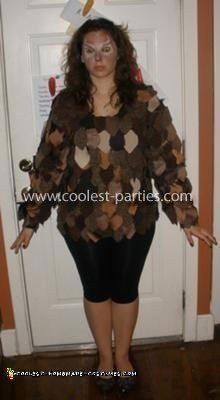 I decided I wanted to be an Owl for Halloween. I was not looking to purchase a costume, but rather create my own Homemade Owl Costume. After looking through many websites of other people’s home made owl costumes I began to create my own.

What I needed:
a variety of brown fabrics,
scissors,
hot glue gun or fabric glue
Long sleeve t-shirt (to glue the ‘feathers’ to).

I went to the local fabric store, and purchased between 1/2 – 1 yard of different brown remnant fabrics. I was not going to purchase fabric full price, and the remnants gave me a wide variety.
I made a few model ‘feathers’ using cardboard and cut out many of these ‘fabric feathers’. I began gluing them from bottom of the shirt up, the feathers resembled roofing shingles in that the top layer feathers covered the attachment of the layer beneath to the shirt. The longest part in the process was the cutting of the feathers.

The Halloween party I went to was outside, therefor this outfit was not meant to be ‘sexy’ but rather warm, which it was with the numerous layers on my chest and arms.

The last part of my costume was my makeup. This was the easiest, and by far the most fun. I had taken a theater makeup course in college, which helped with the actual makeup for this costume, but the method was actually copied from a few different videos I had found on the internet. I think most people got a kick out of the makeup of my costume because I had painted eyes on the lids of my own eyes ( using liquid eyeliner).

I hope this was helpful to you! 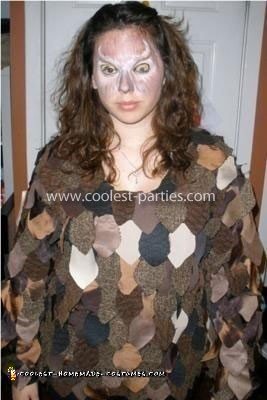 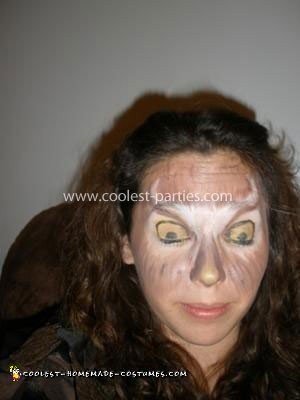 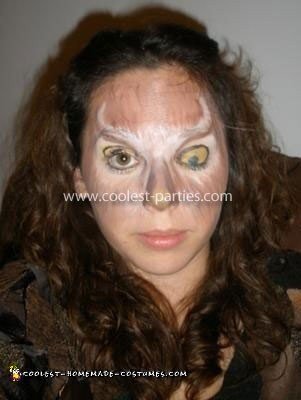