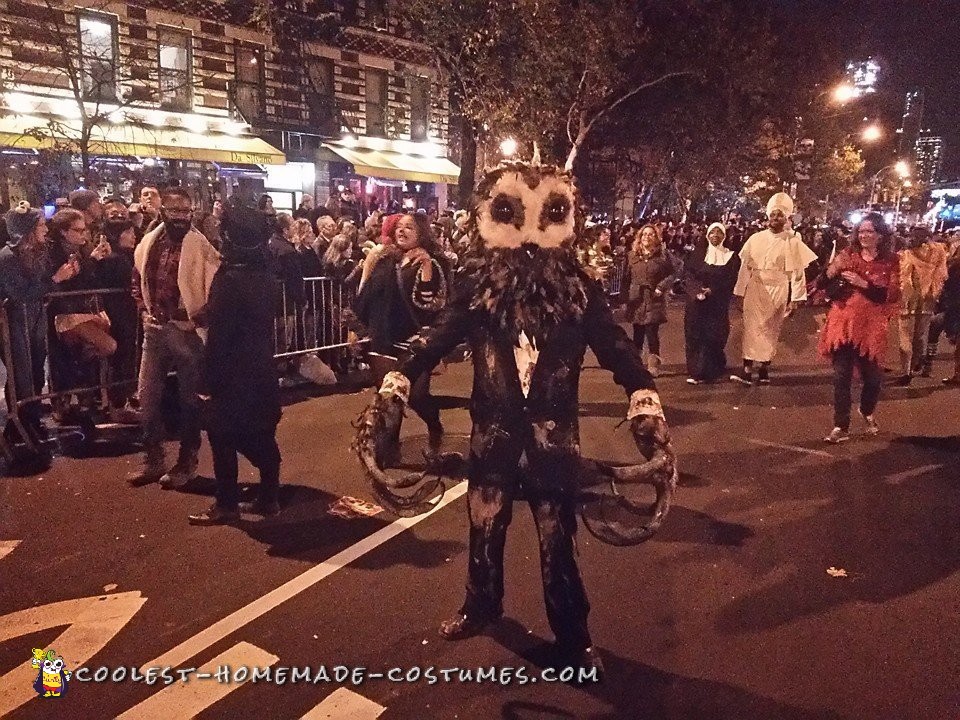 This homemade Lord of Tears Owl man costume was great fun to create, but little did I know all the work that had to be done.

Lord of Tears is a horror film directed and produced by Lawrie Brewster. I first laid eyes on this character in a YouTube video. Soon after watching the movie there was no doubt in my mind that I would try and create my own version to wear at New York’s Village Halloween Parade 2015.

I began by purchasing several packages of mixed pheasant, guinea, fringe and chalappen iridescent plumage from eBay, as well as, Michael’s Arts & Crafts. I hadn’t a clue as to how, what, or where I was going to apply the feathers onto; soon after, I burst into a laughter realizing that what I should’ve bought last I bought first. At this point, there was no turning back for me. I was hooked on a very intensive project that lasted well over 30 days to complete, my determination ended with satisfactory results.

The owl’s head came to be by trial and error. After several attempts at situating an aluminum or plastic colander atop of my head as the foundation, I had to immediately cease. This was not going to work, those items work best at draining the al dente cooked pasta in the sink.  With my imagination and thoughts racing I continued my search throughout the house for something else to use.

The Creation of Lord of Tears Owl Man Costume

At this point, everything seemed to be falling into place. After purchasing a Mongoose bicycle helmet at the local thrift shop, I decided to modify the inner liner. This process started with my wrapping a large piece of mattress overlay foam that I had in the closet; in essence this helped form the shape of an owl’s head. I used a hot glue gun, thread, and straight pins to hold the foam in place.

I thought to myself “Ok so I’m going to be a hot owl!” No not like sexy hot, but as in summer hot. I then cut a hole on top of the helmet and screwed an IDE cooling fan from an old computer into place; connected a nine volt battery and Voilà! A cool owl it was! From there I sewed black sheer fabric onto the head from a skirt donated by a friend leaving the bottom parts to hang loosely around the front, back, and the sides. The beak is constructed from an old black faux leather curtain and single sided adhesive foam sheets. For the frontal part of the face I used sheets of foam and wire to establish its contour. I then started to glue the feathers one at a time to the head with Beacon Fabri-Tac permanent adhesive.

Those round mysterious eyeballs that these enigmatic birds have.

Using a round transparent Christmas ornament, I poured black acrylic paint into each half swirling it around until the ornament was entirely coated. Then I cut four square pieces measuring five inches wide and two inches long from the curtain and rolled them in the shape of a tube, then glued them to the ornament as eyelids. Afterwards, I sewed part of a polyester blend curtain onto the inside of the head as a liner and a small pocket to hold the nine volt battery. And thus the Owl Man’s head was born.

I formed the talons with plywood, adhesive sheets, wire, nails, tacks, newspaper, and upholstery foam. Thereafter, I bent the claws into position removed the wood planks and wire; I inserted a glove into each one and covered entirely with masking tape. Then using an x-acto knife I divided a plastic pumpkin along the ribs to be used as claws. Finally as a crafting technique I combined paper Mache; acrylic paint; pancake and waffle mix; cinnamon; liquid latex; flour; glue, and feathers to form color and texture.

For the jacket, shirt, and pants I used liquid latex, brown shoe polish, and cinnamon. The shoes needed a more slurry mud effect, so I mixed packets of hot cocoa, flour, and Oreo cookies brushing it on just before leaving the house on my adventure to New York City. Along my path several autumn leaves of October stuck to the concoction on the shoes as to accompany me in my travels. With each step I couldn’t help but think “Thank you Mother Nature, for your added touch, it completed my work of art!

I knew the costume to be quite creepy right off the bat; some loved it while others feared it. I traveled from New Jersey to New York City via public transportation and it was hilarious. There was one woman at a stop light in her car while I waited for the bus, and she yells, “Hey owl, hey owl!” As I glanced at her, she said, “Awe hello” in a loving manner, at which point I was the one freaked out.

I continued on my adventure, and upon reaching the shopping district to board a second bus, the towns people surround me with cell phones and cameras at hand asking to please take a picture with me. Many asked their children would they like to be photographed with the owl, and a rapid shake of the head meant no way. I arrived at the Big Apple excited that I was just in time for the march along 6th avenue. Once there, the press and hundreds of people were all over the owl man. Traveling along the parade’s route I was asked and directed toward an area where interviews were being held by a reporter from NY1 News. Unfortunately the reporter was not able to hear me clearly through the huge owl head and asked if my costume was home made. “I will introduce you as Owl Man,” she said, but not before letting me know how creepy the costume was.

It is now time for me to make my way back uptown on the subway train to the Port Authority and board a bus back to Jersey, but not before making a smashing exit from the city. Since my entrance was grand, then the exit had to be just as great.

Still in full costume and boarding the train the flashing lights from cameras was nonstop and the compliments just kept coming. As I exited the 42nd street station to walk one block from 6th to 7th avenue, I realized it was now my parade and my parade only. A walk that would normally take 5 minutes seemed to last an eternity. A good thirty minutes passed and I was still on 42nd street being bombarded by people asking questions and wanting to take photographs. It was either take off parts of the costume specifically the head which got the most attention and reach my destination sooner, or ride it out and allow others to be happy snapping photos and enjoying the moment as I was. My choice, Ride it out!

In closing, I’d like to add comments about my work of art by director, producer and creator of the Owlman – Lord of Tears, Lawrie Brewster.

“Btw we also have a youtube channel, could be cool to post them on there as well with your permission, especially the making of”

“Awesome man! Cheers bud! You did great, just have to share what you achieved!”

“Haha brilliant work bud, can we share some of your pictures on the Lord of Tears page?”

“Thanks man and we’re the ones that are honored, that’s a cool effort you put into making an excellent costume”

I was truly humbled by Mr. Brewster’s acknowledgement of the hard work I put into creating an epic costume.

Thank you for viewing my submission. 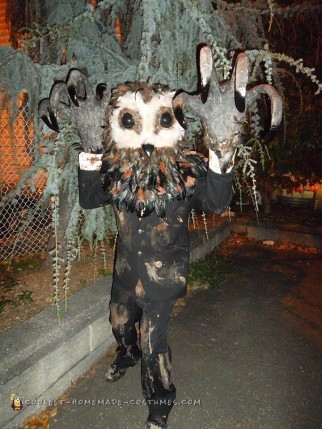 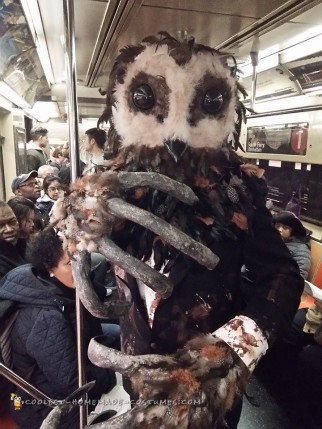 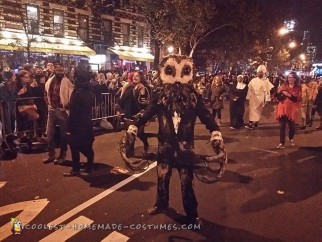 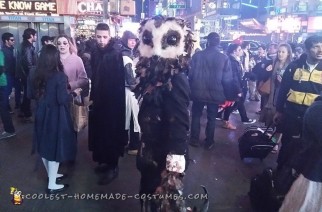 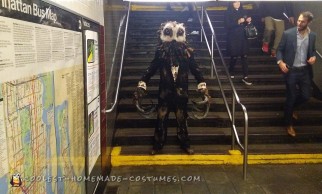 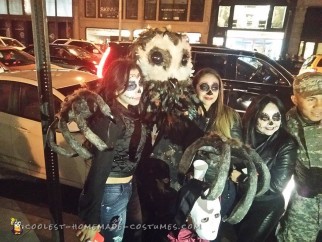 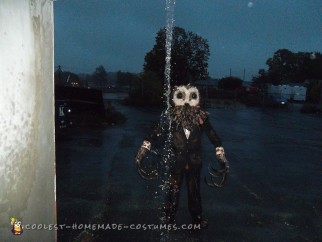 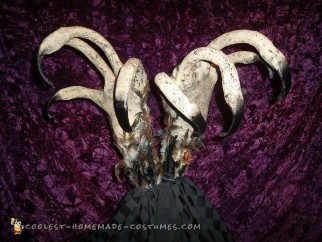 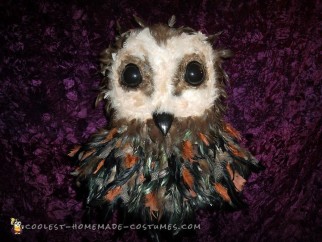