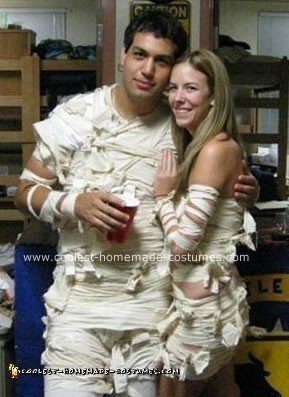 I decided to make a mummy costume because I wanted to be something that is typically associated with Halloween, but also something that you don’t see very often – especially homemade versions. I’ve seen many mummy costumes from a package, but never a successful homemade one that also looks flattering. Hence, the idea was born.

Now, to make the costume, my friend and I bought the following materials:
1. White sheets that were easy to rip
2. Lots of tea bags
3. A hot glue gun
4. White clothes to wear underneath (I bought a tube top and skirt, my friend bought thermal pants and a long-sleeved top)

When we came home, we ripped the sheets into shreds, about three to five inches thick. We then put the shreds over the clothes we had bought and glued them on to keep them in place. The glue was hot, but dried very quickly, so as long as it did not touch our skin, it was fine. We then tied pieces to each other, to make it look more realistic. I also cut a few slits, but obviously, that part is optional. Then finally, at the end, we each took a couple shreds and tied them over our arms.

I think it’s safe to say, we had best handmade costumes at our party!