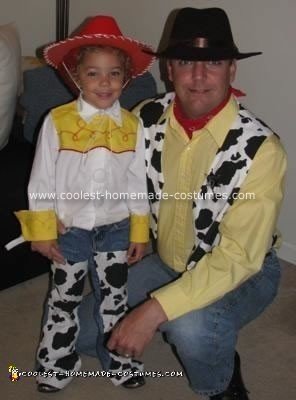 My daughter wanted to be Jessie from Toy Story 2 so it was only natural that my husband was going to be Woody.

For her costume, I used a pattern for a boy’s Western shirt, but altered the yoke to match Jessie’s. I made my own pattern for the cuffs and did some decorative stitching to mimic the embroidery. I took an old pair of her jeans that had a hole in the knee and fused the cow print over the top to look like the chaps. A friend of mine found the red hat at a dollar store, but I added the white ribbon and hole punched the rim and added white string. I also made the yarn wig.

My husband had most of his costume except the vest. I used the same cow print fabric and altered a vest pattern to make it shorter and smaller. The hat was purchased.

They won 1st prize in a family category costume contest at church! 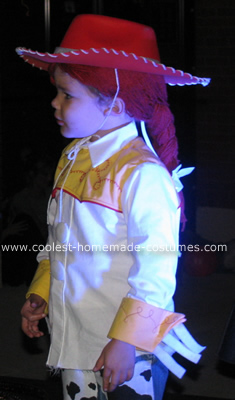 12 thoughts on “Coolest Jessie and Woody from Toy Story Costumes”