I decided to go ALL OUT again, and make a costume no one else has come close to duplicating! From the Comic and Movie X-Men II, a homemade X-Men Nightcrawler Halloween costume! I found pictures of this character online from comics and the movies, printed them out and started my research! I spent a solid 4 months working on this homemade X-Men Nightcrawler Halloween costume, up to the day of MAKEUP (the hardest and most complex part by far).

First the purchased items: (4 months early) in June I bought yellow contact lenses and prosthetic fangs online. Over the next few months I bought a black trench coat jacket, 2 pairs of 3-fingered “YODA” Halloween costume gloves (to be altered later), a Brown Vest on eBay, prosthetic point ears, and a blue turtleneck shirt.

Now for the fun… I personally sewed (machine and hand) my own pair of orange/pink/yellow pants from buying bulk fabric and a pants pattern from the fabric store. The black side strips were sewn in and I glued gold ribbon. I glued shimmery beads all over the trench coat jacket and also cut a slit in the back for my tail to come out of.

For the tail, I bought metal wire and shaped it. Attached it to an old belt and a piece of wood (which I wore like a belt that held the tail in place). Then I took 2 leaves off of a fake indoor plant, stuffed it with tissue and glue them together for the tip. I spray painted it all blue.

The “YODA” gloves were bought because they were 3 fingered already. Then I painted them blue with yellow fingernails. Now for the shoes I took another pair of the same gloves, and cut the 3 fingers up. I sewed 2 of them onto the front of a pair of shoes and and the “thumb” onto the back, sticking out. Also spray painted.

Now for the makeup! OMG this was nuts. I started by drawing the outline of the pattern on his face with marker, then began gluing (yes glue) string all over my face in the exact pattern of Nightcrawler (to extreme details). Spent 3 hours doing this the day of Halloween.

After the string was done, I adhered pointy ears after painting them blue. Now began the painting of my face, which took another 3 hours (no joke) I hand painted my entire face myself!

After this it was time to get dressed! Threw on my clothes, contacts and fangs and I was READY TO ROLL! The best part about this was I could fully walk, use my hands and move my entire face around. It was the most surreal costume EVER! I even won the Scariest Costume in a blockparty of downtown Honolulu out of about 200 contestants!!

I Spent about $300 making this homemade X-Men Nightcrawler Halloween costume, from buying all the parts and makeup, etc. It took a good 3 months off/on and of sewing, cutting, gluing, attaching, trial and error, etc. to get it all right. I had it finished about 3 weeks before Halloween and simply had to wait till Halloween to apply the makeup for the final touch!! It all stayed in tact all night and I definitely was a crowd pleaser!!!

I have tons of pics which I took from the start to finish of my transformation process, but it will only let me post 4. I tried to pick out the best 4, but Maybe they will let me post more!!

Hope you like this, and all my previous Costumes from years past (skeletor, mega-man, ultimate warrior) 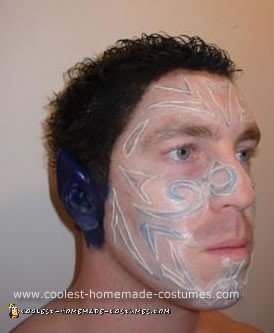 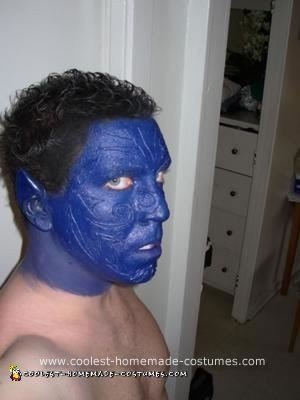 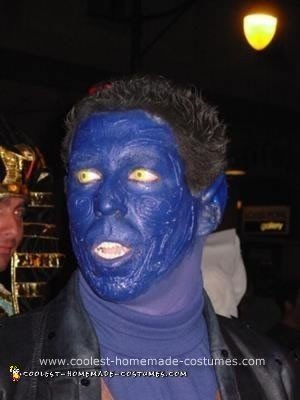 X-Men Family Takes on Halloween with an Awesome Family Costume