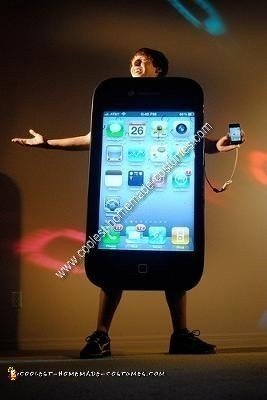 TAMPA, FLA., John Savio (Center), Abigail Gardner (Featured as Apple Employee) This year they’re back at it again. John Savio and Reko Rivera went their separate ways. John created the upgraded rendition of the iPhone 4 featured here at 10x to scale, complete with a 40″ LED LCD Panel, a Jailbroken iPhone 4, VGA out from the iPohone, LED Back Camera Light, weighs roughly 75 lbs and uses a mini 12v Battery with 2+ hours of battery life. The costume took a total of 3 days / 40 hours to complete.

BACKSTORY — This Homemade Working iPhone 4 Costume all started three years ago, Reko Rivera and Bobby Hartman created a wearable large iPhone costume with a real 37″ LCD TV. An iPod was attached with a looping video of a real iphones screen in normal use. Last year with the help of John Savio and John Matthews the team created yet another amazing rendition of the new iPhone 3GS. Savio loved the original idea but wanted to take it to the next level and make it thinner and actually work with user input! With some heavy researching and some solid determination Savio finally found a solution. He managed to modify the software on the iPhone to allow a live dual image output to the large 42″ lcd tv while maintaining the image in landscape mode. Reko originally came up with the idea and really pushed to see his vision come to life two years ago.

This year John Savio and Reko Rivera embarked on different projects. John stuck with his love of apple products and Reko ventured off to explore his love of DJ’ing with a mobile DJ setup.