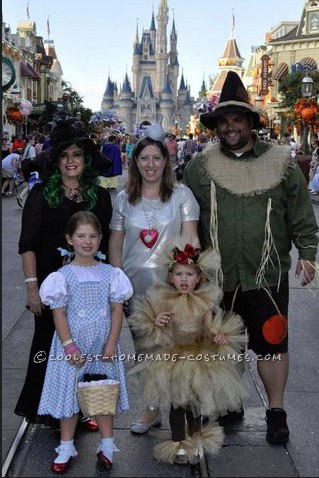 We attended MNSSHP at Disney World and wanted to have a family themed costume. See the Wizard of Oz was celebrating 75 years this year, we thought that would be a good inspiration for our costumes. All of your costumes were homemade except for the Dorothy costume which did have a homemade accessory which was the basket for Toto.

For the tin man, my daughter purchased silver leggings and top. We spray painted shoes silver. We used a funnel attached to a headband spray painted silver. For the heart, we painted a paper mache heart red, added a clock sticker and chain to make it a necklace. For the scarecrow, we took a felt hat and added patches and a raffia braid. The shirt had raffia added to it to look like straw and a burlap collar. The wicked witch costume consisted of a black skirt and blouse with red sparkle shoes and stripped socks.  The lion costume was a tutu made out of tulle.

At the Halloween party, many people came up to us and asked to take our picture. Many compliments were received on how cool our costumes were.