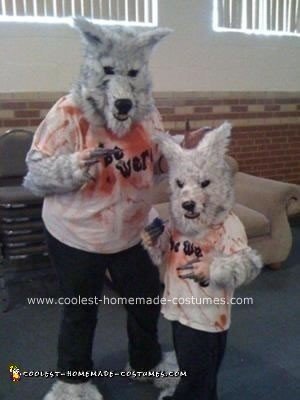 My daughter isn’t much into “girly things.” She wanted to be a scary (but not too scary) werewolf for Halloween. I searched Halloween stores and she tried on costumes, but the masks didn’t seem to fit her right. The eye sockets were not in the right spots and they were made out of rubber. I decided I would make her a homemade Werewolf costume instead of buying one that didn’t fit right. This was the first costume I have ever made.

I started with the mask. I thought about and researched the design for a while and finally settled on a design that allowed the bottom jaw to move up and down when you talk. I started with a cheap $2 eye mask (usually used to make feather masks) and started hot gluing pieces of black foam sheet to have something to glue the fur to. I measured it to her head and used the black foam sheet to wrap over the top and around her head. This held the mask to her head and kept in the right spot for her eyes.

Then I made the muzzle out of the foam sheet making a box like shape and stapling it on the end of the nose. It was also hot glued onto the cheap mask following the nose shape on the cheap mask. I made a similar form for the bottom jaw, but it is not attached to the top of the mask. A piece of elastic is stapled to the back of the jaw (this is used to wrap around the back of the head and hold it on).

I put her hair in a ponytail to keep it from sliding down. Paper clay was modeled around the eye sockets to make a deeper brow. After all of this was dry I painted the mask and paper clay black so you would not see white around her eyes. For the gums I molded paper clay around the inside of the jaws. This takes a while to dry.

The teeth are made out of Sculpey (a clay you mold and bake in the oven to harden). After they were done I pushed them into the paper clay I molded on the gums. After drying, the gums were painted and a tint of yellow added to the teeth to give them age. The ears were also constructed out of foam sheets that I then glued fur to and trimmed the hair to look more realistic. Fur was glued to the entire mask covering all of the foam sheets. I made the fur so it would be long enough under the chin to Velcro to the other side.

I made a tongue out of a piece of red foam sheet. Before gluing into the bottom jaw, I folded it in half to make a crease down the center and used a stick pen to put little holes all over the tongue like taste buds. I then used a watered down black paint as a wash over the tongue. This gave it depth in the crease and holes. This was then glued into the bottom jaw making a “wave pattern” with it like the tongue is being curled. To put on the mask, the bottom jaw is put on first. Then the top piece just slides over the head and Velcros under the chin.

The feet were next. I used an old pair of Crocs slip on shoes and foam. The foam is glued to the top and sides of the shoe. Then you use a knife to sculpt the foam into toes (the toes hang off the front of the shoe).

After sculpting, it is time for the fur. All of the fur was hot glued on and trimmed between the toes. I made claws out of the Sculpey, cut a slit in the fur, put hot glue in the hole and inserted the end of the claw. She loved the feet!

The shirt is an old white t-shirt. I used a black permanent marker to write “Be Were” on the front and sprayed it with a can of spray blood. The pants are blue corduroy. I just cut the bottom off and cut to make fringe.

I couldn’t find anything to use as claws so we bought a package of green witch fingers. I painted them grey and black on the nail to coordinate with the costume.

Pieces of fur were cut to fit over the tops of her arms and are held on with elastic. It took about a month to complete both of our costumes. This was just working evening and weekends on it since I work a full time job. She liked the overall result of her homemade Werewolf costume and wants to play in it all the time. 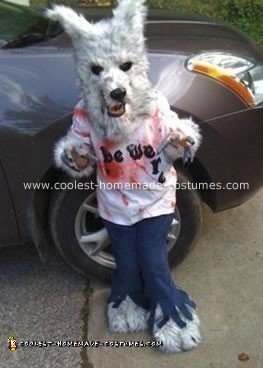 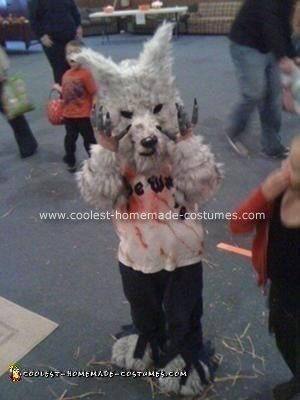 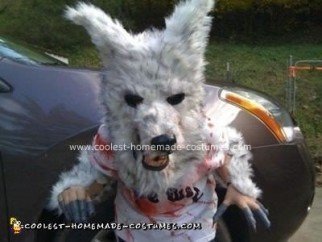