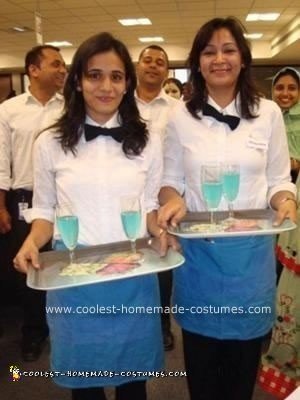 We had twins day in office and my friend and I wanted to do something interesting. But we had no time and we didn’t want to spend too much… Our motive was just to figure out something that will give healthy competition to other contestants :).

So we first thought of what are the outfits that we have in common and it turned out to be formal black trousers, a white shirt and shoes. Then we narrowed down our options and finally we decided that we are going to be waitresses!!!

We went to a shop which sells cheap stuff and bought two identical blue colored aprons. Then we made bows out of two velvet hair bands and tucked it using pins. Next we tied down our apron just the way waiters/waitresses do. I got two identical trays from home, some funky blue colored drinks that matched our aprons and we were ready to face the world !!!!

The idea and homemade waitress costumes were a big hit and we got a prize (apart from many compliments)!!!!