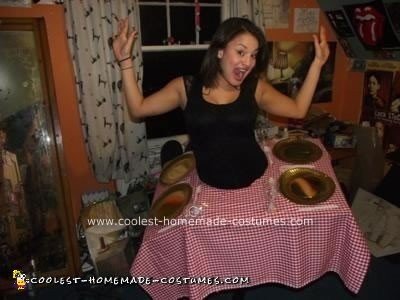 I was going to a party where the theme was household objects, so, naturally I thought whisk. However to my anguish a friend decided that she wanted to. So I thought “fine, sure, I’ll be a TV”. This idea was stolen from me with less than 48 to hours to spear. LUCKILY, I used my incredible box possessing skills, I bought a table cloth, plastic plates/ cutlery and cups. I cut the box to make a table top shape (rectangle), then put a hole in the middle to make and big enough for me to fit in, yet small enough so it wont fall down.

I then, using a glue gun, stuck the cloth onto the box, and again cut a hole in the middle. I stuck four plates down symmetrically. Each pair of plates was parallel to each other and were all perpendicular to the end of the table. I put four knives on the left side of the plate and four forks on the right side of the plates. (I’m left handed). Then of course, a spoon on top of each plate for those desert lovers. The plastic cups I had purchased earlier were quite remarkable. It was shaped like a wine glass, however the base separated from the rest, which meant I could stick the base down then remove the rest to drink out of then when my arms tired, put them back on the table.

In other words. I laid a table, on a bit of cardboard and here’s my Homemade Table Costume.

Enjoy, it’s impossible to not have fun when dressed as a table

WARNING: Not suitable for those with weak bladders. 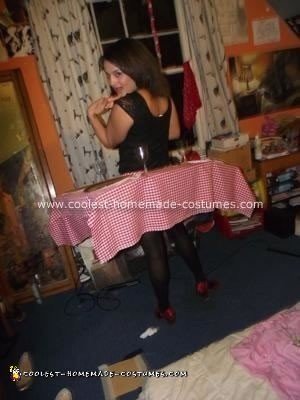