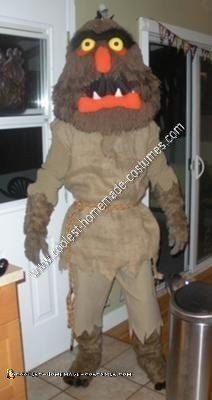 I wish I had taken pictures of the process of making this Homemade Sweetums from The Muppet Show Costume. It wasn’t a very hard costume to make, it just took a lot of patience and a LOT of yarn.

You can make the head using a hat or helmet to start and gluing a large wire frame in the shape of the head. After that I cut and wrapped the plastic mesh around the frame and held it in place with hot glue.

The next step is to make a LOT of layers of “fur” out of yarn. I used a piece of cardboard and cut it to be 6″X16″ and wound the yarn around it, trying not to make to many gaps as I wound it around. I then put a strip of tape one inch from the top and flipped it over a did the same on the other side, so that the strips were on the “opposite” sides of the cardboard. I cut it straight across one side of the tape, and did the same for the other side. Repeat this process about forty times and then start layering the strips around the helmet, starting from the bottom using hot glue to attach them.

I just sewed and hot glued the mouth, nose, and eyebrows after the head was covered in fur. Eyes were made by cutting a foam ball in half and painting yellow and I used see-through fabric for the mouth.

The arms and legs were made out of fake fur that I cut and dyed because it was the wrong colour and length. I brushed on the dye with a paint brush so that it wasn’t all the same colour. I hot glued fur to a pair of gloves and shoes and used brown fur balls purchased from a craft store for toes.

The costume took a couple of weeks to make, but it was worth it on Halloween, scared a bunch of trick or treaters and won a costume contest. But most importantly I had a lot of fun making it, can’t wait till next year. 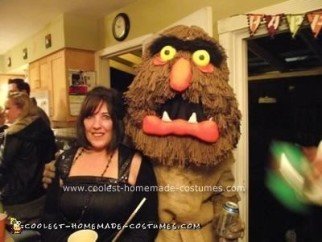 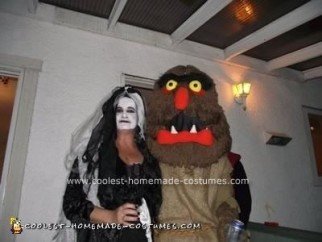 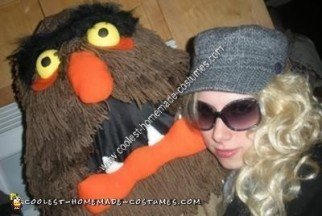